"In re Baby M" is an American custody case between biological parents who were strangers to each other and who met via a newspaper advertisement which specifically sought a woman willing to enter into a contract to conceive and bear a child (by artificial insemination) with a married man, and who would then relinquish her maternal rights in order for the child to be adopted by the wife of the father and raised by the married couple.

Mary Beth Whitehead, was artificially inseminated with William Stern's sperm, making her the biological mother of their child. Whitehead had responded to an ad placed by the Infertility Center of New York in the Asbury Park Press seeking women willing to help infertile couples have children.[1] Prior to conceiving their daughter, Whitehead and Stern entered into a contract which they termed a "surrogacy contract." Despite what was stated in their contract, Stern's wife, Elizabeth, was not infertile, but had multiple sclerosis and was concerned about the potential health implications of pregnancy. A medical colleague had warned her that his own wife had suffered temporary paralysis during pregnancy.[2]

On March 27, 1986, Whitehead gave birth to a daughter, whom she named Sara Elizabeth Whitehead. However, within 24 hours of transferring custody to the Sterns, Whitehead asked for the baby to be given back to her, and was said to have threatened suicide. Whitehead subsequently refused to return the baby to the Sterns and left New Jersey, taking the infant with her. The Sterns had the Whitehead family's bank accounts frozen and sought warrants for their arrests.

In 1987, New Jersey Superior Court Judge Harvey R. Sorkow awarded custody of Baby M to the Sterns under a "best interest of the child analysis", validating the surrogacy contract.[3]

On February 3, 1988, the Supreme Court of New Jersey, led by Chief Justice Robert Wilentz, invalidated surrogacy contracts as against public policy but in dicta affirmed the trial court's "best interest of the child" analysis. The Supreme Court remanded the case to family court. On remand, the lower court awarded Stern custody and Whitehead visitation rights.[4][5] 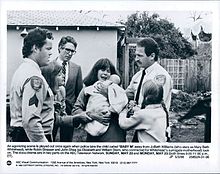 The case attracted much attention as it demonstrated that the possibilities of third party reproduction had novel legal and social ramifications. The case exposed the dilemma of a mother who was impregnated by a stranger, contractual agreements and biological bonding. The case also split feminists, some of whom argued that a woman retains all rights to her own body, but others were also sensitive to the issue of potential exploitation. The surrogacy arrangement was heavily criticized, in part because the term "surrogate" was inaccurately used in this contract and obscured the fact that Mary Beth Whitehead was the biological (not surrogate) mother of the child.

Melissa attended The George Washington University and majored in religious studies. She said it was strange to study the Baby M case in her bioethics class at the university.[1]

"I love my family very much and am very happy to be with them," Melissa told a reporter for the New Jersey Monthly, referring to the Sterns. "I'm very happy I ended up with them. I love them, they're my best friends in the whole world, and that's all I have to say about it."[1]

New Jersey Judge Francis Schultz expanded the Baby M ruling to apply to gestational surrogates, as well as genetic surrogates, on December 23, 2009, in the case of A.G.R. v. D.R.H & S.H..

In January, 2011, a British Court ruled a woman who bore a daughter under an informal surrogate agreement with a childless couple should keep the baby. [2]

In October 2011, Judge Sorkow, the original judge in the Baby M case, presided over the wedding of Melissa and her husband, a neuroscientist from New Jersey. The couple currently live in London, United Kingdom.