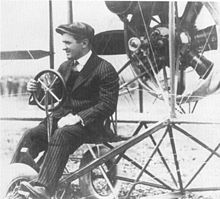 Lincoln Beachey, in his business suit he wore for flying

Lincoln Beachey with his plane

He was known as The Man Who Owns the Sky, and sometimes the Master Birdman.[1] Beachey was acknowledged even by his competitors as "The World's Greatest Aviator".[1] He was "known by sight to hundreds of thousands and by name to the whole world."

Beachey was born in San Francisco, California on March 3, 1887. He worked as a dirigible pilot for Thomas Scott Baldwin. Beachey helped build the dirigible "California Arrow" and made his first dirigible flight in 1905 at the age of 17.

He piloted his balloon at the [[1910 Los Angeles International Air Meet at Dominguez Field where he raced against a fixed-wing aircraft around a course, at an altitude of 100 feet (30 m).

Beachey learned to pilot airplanes at the Curtiss Flying School

On June 27, 1911, he took off into a drizzle and flew over the lower falls of Niagara Falls, then above American Falls, before an estimated 150,000 spectators. He took his plane under "Honeymoon Bridge," 20 feet (6.1 m) above the rapids. (Local papers described his plane as looking like "a beat-up orange crate.")

In Chicago, Beachey raced a train and let his wheels touch the top of the moving train as it passed underneath. At the 1911 Chicago International Aviation Meet, he won multiple awards for stunts, and set a new altitude record. He filled his tanks with fuel, then said he would point the plane's nose skyward and keep going until the fuel ran out. For an hour and forty-eight minutes he spiraled upwards until the engine sputtered and died. The plane glided in spirals to the ground, and Beachey climbed out, numb and stiff. The barograph aboard the plane showed he had reached a height of 11,578 feet (3,529 m), temporarily setting the world's altitude record. In 1913, Beachey took off inside the Machinery Palace on the Exposition grounds at the San Francisco World's Fair. He flew the plane at 60 miles per hour and landed it, all inside the confines of the hall. His stunt specialty was the "dip-of-death", where he would take his plane up to 5,000 feet (1,500 m), and dive toward the ground at full speed with his hands outstretched. At the very last moment he would level the plane and zoom down the raceway, with his hands off of the controls, gripping the control stick with his knees. In a jest aimed at Blanche Stuart Scott, another member of the Curtiss exhibition team, Beachey dressed up as a woman and pretended to be out of control in a mock terror to hundreds of thousands.[2]

Orville Wright said: "An aeroplane in the hands of Lincoln Beachey is poetry. His mastery is a thing of beauty to watch. He is the most wonderful flyer of all." Thomas Alva Edison wrote: "I was startled and amazed, when I saw that youngster take to the sky and send his aeroplane through the loop and then follow that feat with an upside-down flight. I could not believe my own eyes, and my nerves were atingle for many minutes."[citation needed]

In 1913, a Russian pilot, Captain Peter Nesterov made the first inside loop. Frenchman Adolphe Pegoud later that year became the second and more famous person to do it and Beachey wanted to try it himself. Curtiss refused to build him a plane capable of the stunt, and Beachey left the flying team. At the same time, he wrote a scathing essay about stunt flying, stating most people came to exhibitions out of morbid eagerness to see young pilots die. On March 7, 1913, he announced he would never again fly professionally, believing he was indirectly responsible for the tragic deaths of several young aviators who had tried to emulate his stunts.[3] In May, he would cite twenty-four fatalities, all of whom were "like brothers" to him.[4] He felt tremendous guilt about their deaths and the suffering of their families.

Beachey went into the real estate business for a time, until Curtiss reluctantly agreed to build a stunt plane powerful enough to do the inside loop. Beachey returned and, on October 7th, took the plane up in the air at Hammondsport, NY. Unfortunately, on its first flight either a downdraft or a loss of speed following a turn caused the plane to dip momentarily. One wing clipped the ridgepole of a tent on the field and the plane then swept two young women and two naval officers off the roof of a nearby hangar, from where they had been watching the flight, contrary to Beachey's wishes. One woman was killed and the others injured as a result of the fall, a distance of about ten feet. Beachey's plane crashed in a nearby field but he managed to walk away from the wreckage with minor injuries. (A coroner's jury ruled the death of the 20-year-old woman as accidental.)[5] Beachey decided for the second time to leave aviation. 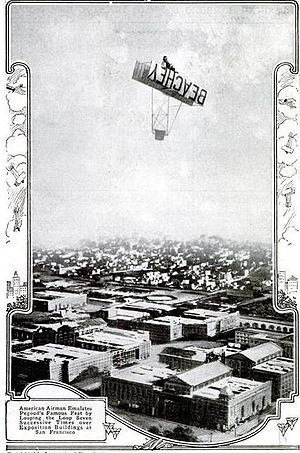 Lincoln Beachey flying a loop over the San Francisco Exposition

However, the sight of a circus poster changed his mind. The poster depicted a plane flying upside-down, a stunt that hadn't been attempted yet. Beachey was determined to master the loop and upside-down flight, but decided to go it alone.

He tried making a living demonstrating loops on exhibition grounds, but soon found that people would not pay to see a stunt they could see easily outside the gates. He retired for a third time, but returned when his manager had an idea that he depicted in a poster: the "Demon of the Sky" against the "Daredevil of the Ground." Beachey was to race his plane against a racing car driven by the popular driver, Barney Oldfield. The manager made sure there was a high fence around the exhibition grounds, forcing people to pay if they wanted to see the race. Beachey's plane was faster than Oldfield's car, but they took turns "winning," and crowds flocked to see their daily competitions. With the money he earned by racing, Beachey designed and built a new plane, the "Little Looper." He had his name painted in three-foot-high letters across the top wing. Soon he was flying multiple loops. Whenever he heard about another pilot setting a record for flying continuous loops, Beachey would promptly break it, flying as many as eighty loops in a row. Beachey and Oldfield toured the country, staging races everywhere they went. In Dayton, Ohio, home of the Wright Brothers, they performed to a crowd of 30,000.

After he first successfully completed a loop, he wrote a poignant reflection, saying, "The silent reaper of souls and I shook hands that day. Thousands of times we've engaged in a race among the clouds. Plunging headlong in to breathless flight, diving and circling with awful speed through ethereal space. And many times when the dazzling sunlight has blinded my eyes, and sudden darkness has numbed all my senses, I have imagined Him close at my heels. On such occasions I have defied him, but, in so doing have experienced fright which I can not explain. Today, the old fellow and I are pals."

In 1914, he dive-bombed the White House and Congress in a mock attack, proving that the US government was woefully unprepared for the age that was upon it.[citation needed]

In 1915, he had a large wooden model made of the Battleship Oregon, and had it anchored a mile offshore of San Francisco just before the Panama-Pacific International Exposition. The Navy loaned him 100 sailors to man the fake vessel, which was loaded with explosives. Beachey flew his plane over the model, dipped, and dropped what looked like a smoking bomb. One explosion grew into fifty as Beachey swooped over the model dreadnought. The crew had already escaped aboard a tugboat, but 80,000 people onshore screamed and some fainted in the belief that Beachey had just blown up the Oregon.[citation needed]

It was at the Panama-Pacific International Exposition that Beachey made his last flight. Prior to the exposition, in 1914, he had ordered a Taube monoplane built with an 80 horsepower (60 kW) engine, powerful enough to carry out a maneuver Beachey had not yet presented to the public: inverted flight. He had tested it at low altitudes, and on March 14, 1915, he was ready for his first public flight. He took the plane up in front of a crowd of 50,000 (inside the Fairgrounds, another 200,000 on the hills), made a loop, and turned the plane onto its back. He may have been so intent on leveling the plane inverted he failed to notice he was only 2,000 feet (610 m) above San Francisco Bay. He pulled on the controls to pull the plane out of its inverted position, where it was slowly sinking. The strain caused both wings to shear off, and the fuselage plunged into the bay. Navy men jumped into action, but it took 1 hour and 45 minutes to recover Beachy's body. Even then, rescuers spent three hours trying to revive him. The autopsy found he had survived the crash and had died from drowning.[6]

His funeral in San Francisco was said[citation needed] to be the largest in the city's history up until then. Vast crowds had followed his tours and it has been estimated 30 million people saw him in his career, 17 million in 1914 alone.

{see The Man Who Owned the Sky}

There's a skipping-rope rhyme about Lincoln Beachey sung in the 1920s: