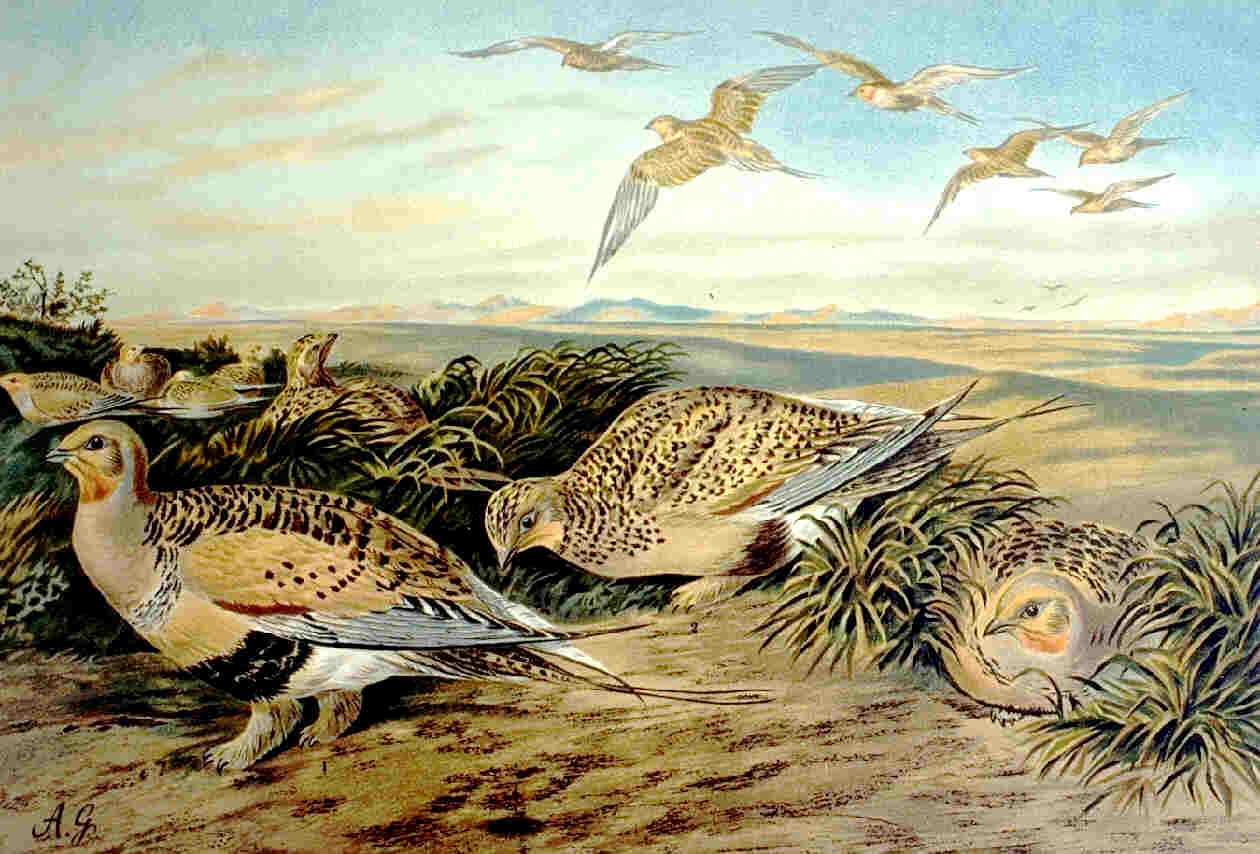 :"Sandgrouse is also the name of the journal of the Ornithological Society of the Middle East - see

The sandgrouse are a family, Pteroclididae, of 16 species, the only living members of the order Pteroclidiformes. They are restricted to treeless open country in the Old World, such as plains and semi-deserts. They are distributed across northern, southern and eastern as well as ; the , through to ; and the . Sandgrouse are traditionally placed in two genera. Two central Asian species in "Syrrhaptes", and the rest in "Pterocles", but recent research casts some doubt on this division.

Sandgrouse have small, pigeon like heads and necks, but sturdy compact bodies. They range in size from 24-40 cm in length and in weight between 150-500 g. There is little in size, although the males are slightly larger. They have long pointed wings and sometimes tails and a fast direct flight. The muscles of the wings are strong and capable of a rapid takeoff if needed. Their short legs are feathered down to the toes, and genus "" has the toes feathered as well. The is , an adaptation to feeding on the ground for long hours in open terrain. The plumage varies considerably amongst the sexes. The feathers of the belly are specially adapted to absorbing water and retaining it, allowing adult birds, particularly males, to carry water to chicks that may be many miles away from watering holes

Sandgrouse are principally seed eaters. A number of other food items have been found in the stomachs of sandgrouse that have been shot, but the numbers are so small that they could be accounted as incidentally swallowed material. The diet of many species is highly specialised, with the seeds of a small number of plant species dominating the diets. This may sometimes reflect the local availability, but in other circumstances this reflects actual prey selection by the sandgrouse. Species in the family are often favoured for theirclarifyme. In agricultural areas oats and grains are readily taken. Seeds are either collected from the ground or directly from the plants. Foraging techniques vary amongst species that coexist in order to reduce competition; in Namibia feed slowly and methodically whilst feed rapidly.

Sandgrouse are gregarious, feeding in flocks up to 100 birds. Their diet is dry and as a concequence they need to regularly visit water in order to drink. As they travel to water holes or lakes they call to others members of their species and many hundreds or thousands of birds may visit a drinking site at once. Not all species need to drink every day, and one species, the , does not travel to drink, presumably because of the relative abundance of water in its habitat. Most species are resident, but Pallas's Sandgrouse is eruptive.

Sandgrouse are monogamous. As the breeding season approaches, usually timed to coincide with a crop of seeds after the local rainy season, the feeding flocks tend to break up into pairs. The nesting site is nothing more than a slight depression in the ground; occasionally this can take the form of a footprint. Most typically three cryptic eggs are laid, occasionally there may be two and rarely four. Incubation duties are shared, with the males incubating at night and during the early morning and the females during the day. The chicks usually hatch after 20-25 days. The chicks leave the nest as soon as the last one to hatch is dry. They are capable of feeding themselves from hatching, but need to learn feeding skills from their parents, and remain closely with their parents for several months. At first the chicks are too small and young to thermoregulate, and are provided with shade during the hottest part of the day and are brooded at night

Sandgrouse have little interactions with people, primarily because most species live in arid unpopulated areas and at low densities. They are not generally sought after as s as they are not especially palatable, although they have on occasion been taken in great numbers at water holes. An attempt to introduce them into failed but they have been introduced to . No species is considered to be threatened although there have been some localised range contractions, particularly in Europe.

Pteroclidae were formerly included in the largely due to their reported ability to drink by the "sucking" or "pumping" action of of the ("The only other group, however, which shows the same behavior, the Pteroclidae, is placed near the doves just by this doubtlessly very old characteristic."