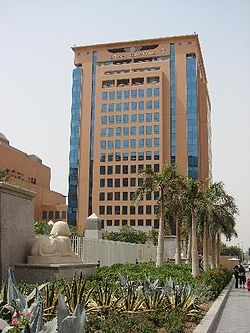 A building (Stars Capital 1) in the City Stars complex.

City Stars is a commercial development in Egypt. The complex is located between Nasr City and Heliopolis, in Cairo. It is considered the first integrated urban development project of its kind in the Middle East and Europe.

Built with an Ancient Egyptian theme, it consists of three pyramids (partially glass), surrounded by 11 towers, that make up the complex, plus a separate building for the shopping mall in its two phases. |accessdate=2008-03-03}}</ref> City Stars offers an unparalleled choice in retail and entertainment and brings together an unbeatable combination of leading brand names in a single destination.

InterContinental City Stars Hotel, The Saudi owners of this project in the Middle East are the Sharbatly Family. The Hotel has won twice the Best Business Hotel in Cairo award the past two years in a row,[3] is the largest InterContinental hotel in the world. It provides 790 rooms and suites.[4] The hotel also offers:[5]

The 330 rooms[7] Holiday Inn City Stars offers guests an intimate venue for both business and leisure. The hotel offers:[8]

With a gross leasable area of 150,000 m2,[1] Stars Centre was considered the largest in the Middle East[11] until November 2008, when it was surpassed by Dubai Mall, located at Burj Khalifa which is almost twice as large as Stars Center, and is now the largest shopping mall in the world.

Stars Centre is now the second largest shopping mall in the Middle East, and still has the largest hypermarket in the region. It consists of 7 levels, and has the largest cinema complex in Egypt (21 screens).

Some of the distinctive services provided in the centre include:

The first phase includes 300 shops and outlets. These are a diverse range that provide anything that is sold in Cairo; fast food, dining restaurants, groceries, clothing, electronics, antiques, furniture, telecommunications. The first phase included a 16 screen cinema complex and a 6,000 square-meter indoor amusement park,[12] that includes the largest indoor roller coaster in the region.

The second phase added about 250 new outlets, adding to the original 300 stores, making a total of 550 outlets.[13] As for entertainment, the second phase features the opening of new cinema screens, increasing the total number of screens in the centre to 21, which feature Super Screens and Digital Surround Sound that provide the latest technology. The new cinema complex has the first 5 star cinema in the region.[14]