The Todt Organisation, (German: Organisation Todt) (OT) was a Third Reich civil and military engineering group in Germany named after its founder, Fritz Todt, an engineer and senior Nazi figure. The organization was responsible for a huge range of engineering projects both in pre-World War II Germany, in Germany itself and occupied territories from France to the Soviet Union during the war. It became notorious for using forced labour. The history of the organisation falls fairly neatly into three phases: 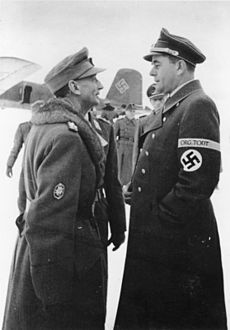 Eduard Dietl and Albert Speer, at Rovaniemi Airport in Finland, in the winter of 1944

The Autobahn concept did not originate with the Nazis but had its beginnings in the efforts of a private consortium, the HaFraBa (Verein zur Vorbereitung der Autostraße Hansestädte-Frankfurt-Basel), founded in 1926 for the purpose of building a high-speed highway between Northern Germany and Basel, in Switzerland. With a decree establishing a Reichsautobahnen project for an entire network of highways, issued on 27 June 1933, Adolf Hitler made it a vastly more ambitious public project and that responsibility rested on Fritz Todt's shoulders as the newly-named Inspector General of German Roadways.[2]

By 1934, the self-aggrandizing Todt had succeeded in elevating this office to near cabinet rank. Todt was, however, also an extremely capable administrator and had built by 1938 more than 3,000 km (1,900 mi) of roadway. The Autobahn project became one of the show pieces of the Nazi regime. Todt had also in that period put together the administrative core of what would properly speaking become the Organisation Todt. The growth and growing importance of the organization, and the increasing prominence of its leader, are a textbook example of the way in which an aggressive and able party leader could expand his authority and purview in the fluid (and treacherous) context of the polycratic German state under Adolf Hitler.[3]

Initially, the Autobahn project relied on the open labour market as a source of workers. Germany was at this time still recovering from the effects of the Great Depression and there was no shortage of available labour. As the economy recovered and the supply of labour became a more serious issue, the OT was able to draw on conscripted (i.e., compulsory) workers, from within Germany through the Reich Labour Service (Reichsarbeitsdienst, RAD) from 1935. As per the law of 26 June 1935, all male Germans between the ages of 18 and 25 were required to perform six months of state service.[4] In this period the work was compensated, at a rate slightly greater than that of unemployment support. The composition and working conditions of the labour force would change drastically for the worse over the course of the following ten years.[5] 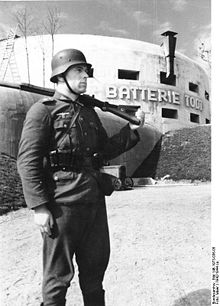 A German soldier in front of a defensive work at Cap Gris Nez in France. It was built by the Organisation Todt as part of the Atlantic Wall

The OT was not given an official name until Hitler, in a rather careless manner, did so shortly after coming to power in 1933.[6] In 1938 Todt founded the Organisation Todt proper as a consortium of the administrative offices which Todt had personally set up in the course of the Autobahn project, private companies as subcontractors and the primary source of technical engineering expertise, and the Labour Service as the source of manpower. He was appointed by Hitler as plenipotentiary for Labour within the second four year plan, undermining Göring's rule. Investment in civil engineering work was greatly reduced. Between 1939 and 1943, in contrast to the period from 1933 to 1938, less than 1,000 km (620 mi) of roadway were added to the Autobahn system. Emphasis was shifted to military efforts, the first major project being the Westwall (known in English as the Siegfried Line) built opposite the French Maginot Line and serving a similar purpose.[7] Correspondingly, Todt himself was named Minister of Armaments and Munitions in 1940. In 1941 Todt and his organization were further charged with an even larger project, the construction of an Atlantic wall to be built on the coasts of occupied France, the Netherlands, and Belgium. Included with this "Atlantic Wall" project were the fortification of the British Channel Islands, which were occupied by Nazi Germany from 30 June 1940 to 8 May 1945. The only Nazi concentration camps on British soil were operated by the OT in Alderney.

The huge increase in the demand for labour created by the Westwall project was met by a series of expansions of the laws on compulsory service, which ultimately obligated all Germans to arbitrarily determined (i.e. effectively unlimited) compulsory labour for the state: Zwangsarbeit.[8] Between 1938 and 1940, 1.75 million Germans were conscripted into labour service. Both the Organisation Todt and the Labour Service were characteristically paramilitary in hierarchy and appearance, with elaborate sets of chevrons, armbands[9] and epaulettes, and other insignia for the display and recognition of rank.

Fritz Todt died in a plane crash on 8 February 1942, shortly after a meeting with Hitler in East Prussia. Todt had become convinced that the war could not be won and thought himself indispensable enough to say as much to Hitler. As a result, there has been some speculation that Todt's death was a covert assassination, but this has never been substantiated. Todt was succeeded as Minister of Armaments and Munitions and de-facto head of the Organisation Todt by Albert Speer.

Despite the death of its namesake, the OT continued to exist as an engineering organization and drew multiple further assignments. At the beginning of 1943, in addition to its continuing work on the Atlantic Wall, the organization also undertook the construction of launch platforms in northern France for the V1 flying bomb and V2 rocket. In the summer of that year, following the increasingly defensive course of the German war effort, the organization was further charged with the construction of air-raid shelters and the repair of bombed buildings in cities within Germany and with the construction of underground refineries and armaments factories (Project Riese).

Administratively, however, the organization was effectively incorporated into Albert Speer's Ministry of Armaments and War Production in 1943. Speer's concerns, in the context of an increasingly desperate Germany in which all production had been severely impacted by materials and manpower shortages and by Allied bombing, ranged over almost the whole of the German war-time economy. Speer managed to increase production significantly, at the cost of a vastly increased reliance on compulsory labour. This applied as well to the labour force of the OT. 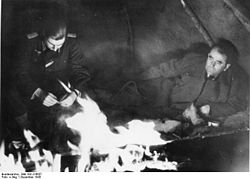 By the end of the war, the compulsory state service for Germans had been reduced to six weeks of perfunctory military training and all available conscript German manpower diverted to military units and direct military support organisations. From the beginning of 1942 at the latest, their place was increasingly taken by prisoners of war and compulsory labourers from occupied countries. Foreign nationals and POWs were often, somewhat euphemistically, referred to as "foreign workers" (Fremdarbeiter). In 1943 and 1944 these were further augmented by concentration camp and other prisoners. Beginning in the autumn of 1944, between 10,000 to 20,000 half-Jews (Mischlinge) and persons related to Jews by marriage were recruited into special units.[10]

By the end of 1944, of approximately 1.4 million labourers in the service of the Organisation Todt overall, 1% were Germans rejected from military service and 1.5% were concentration camp prisoners; the rest were prisoners of war and compulsory labourers from occupied countries. All were effectively treated as slaves and existed in the complete and arbitrary service of a ruthless totalitarian state. Many did not survive the work or the war.