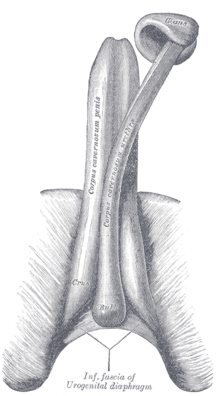 Penile enlargement procedures are designed to increase the size of the cavernous cylinders of the penis or to stimulate blood flow to increase hardness.

Penis enlargement procedures (sometimes euphemistically referred to as male enhancement procedures in spam email and television advertisements) are techniques alleged to make the human penis increase in girth, length, or hardness. Often, in the course of advertising fraudulent products, the distinction between temporary enlargement, i.e. erection, and permanent enlargement, is deliberately muddied.

Procedures range from manual exercises to stretching devices and surgical procedures, with reports of successes and failures around the world. While some of these are known to be outright hoaxes, other techniques have some measure of success.

Very little legitimate scientific research has been done on penile enlargement, so any claims of significant and permanent enlargement can be biased or anecdotal. Conversely, there is an element of risk to most of the procedures, with negative outcomes ranging from the tearing of skin and scarring, to permanent loss of sexual function. Due to the speculative nature of any hope for "improvement" and the many known cases of permanent injury involved in this endeavor, many medical professionals are skeptical of the subject.[1]

At present there is no consensus in the scientific community of any non-surgical technique that permanently increases either the thickness or length of the erect penis that already falls into the normal range (4 to 6 inches).

The surgical method of penis lengthening is controversial in the medical community. It involves the cutting of 2 tendons that hold the penis up. By doing this, the penis is allowed to drop down and out lengthening it by 1-2 inches. Sometimes this method is combined with the clamping off of some blood vessels making for increased blood retention allowing for a harder and thus larger erection.

Rather than attempt to change the actual size of the penis, one may make it appear bigger, by trimming the pubic hair or by losing weight.

"Penis enlargement pills", "penis patches" and ointments are commonly offered over the Internet. This is one of the most common topics for e-mail spam messages. "Penis enlargement pills" contain natural ingredients, which expand the capacity of the Corpus cavernosum penis, the two cylindrical tissues inside the penis that fill with blood during arousal creating the hardness of the erection.

A rising trend in penis enlargement is the use of amino acids L-arginine and L-Ornithine[citation needed]. These two amino acids are commonly taken as supplements by body builders to speed up recovery time and to improve endurance during training. L-Arginine is produced naturally by the human body, however it can also be obtained from dietary sources. It plays a key role in tissue recovery and cardiovascular health. It has also been shown to dilate blood vessels, allowing more blood to enter the penis, and while this doesn't guarantee any permanent enlargement it can assist with erectile dysfunction in some individuals. Similar to body building, many people that practice penis enlargement exercises will take L-Arginine prior to the exercise to improve recovery of the tissue and improve blood flow. In addition to these effects, high levels of L-Arginine have been suggested to increase the body's production of Human Growth Hormone (HGH). L-Ornithine is used by body builders to reduce physical fatigue; some believe that when combined with L-Arginine it can also improve the production of HGH. These supplements are generally found in health food stores, although they can sometimes be found in pharmacies as well.

A penis pump is a cylinder that is fitted over the penis, with a manual or motorized pump to create suction. As the apparatus creates a partial vacuum around the penis, blood is drawn into the penis, helping it to become engorged. As vacuum increases, the difference between the inner blood pressure and the pump pressure increases as well; excessive pressure causes vascular damage rather than a harder penis.

Penis pumps, usually described in this context as vacuum pumps, have use in conventional alleviation of impotence. The pump itself is essentially as described above, although often made to higher standards of quality with a much higher price, and arrangements for distribution by suppliers of medical equipment. The purpose is not to cure the condition, but to attain an erection by mechanical and hydrodynamical means even if there is nerve and vascular damage preventing a full natural erection; once the penis is erect, a compression ring is slid on to maintain the erection which will otherwise subside immediately.

A flexible compression ring (or sometimes more than one), commonly called cock rings when used recreationally, must be used. It is fitted on the open end of the cylinder, then an erection is created by pumping. Then the ring is pushed by hand onto the base of the erect penis before releasing the vacuum. This restricts blood flow out of the now erect penis, enabling the erection to be held even in the presence of problems of the vascular or nervous system which would otherwise lead to immediate loss of erection. In the best circumstances erections can be maintained for a considerable time, but manufacturers' literature recommends that, for safety, rings should be removed after no more than 30 minutes. Very prolonged use (hours) will cause permanent harm.

A personal lubricant of a type not harmful to the ring material is used, primarily to make a good seal at the base of the pump to prevent air leakage, in the same way that vacuum grease is used with a laboratory vacuum pump. It also makes it easier to slide the ring off the cylinder, and later to remove the ring.

Pumping must be done very carefully to avoid serious injury: over-enthusiastic pumping can burst blood vessels and form blisters. In some cases the testicles can be unexpectedly pulled into the cylinder, causing discomfort, pain, and possibly injury.[citation needed] It is also believed that the rim of the cylinder can cut into the skin and over time cause damage to the ligaments surrounding the penis. Impatiently pumping without reading explanatory material can produce too much suction (any pressure lower than 10 torr/1,333 Pa)[citation needed] and cause permanent and irreparable injury. Attempts at using vacuum cleaner units for this purpose have resulted in extremely severe injuries because the suction is far too powerful.

Pumps used with rings are virtually always effective, as they operate by a simple mechanical process, in cases of ED, even when pharmaceutical methods fail. They may nonetheless be found unsatisfactory due to the inconvenience and similar factors.

The effectiveness of penis pumps for permanent penis enlargement was examined by Kazem, Hosseini and Alizadeh. They studied 37 men with penis length less than 10 cm and found no significant change in penile length after using pumps for six months, although the follow-up have found 30% satisfaction with the method.[2]

A 31-patient study conducted by the Department of Urology at St Peter's Hospitals and the Institute of Urology in London investigating the usefulness of pumps to correct the penile curvature associated with Peyronie's disease found that "There was a clinically and statistically significant improvement in penile length, angle of curvature and pain after 12 weeks of using the vacuum pump". In this study, subjects with Peyronie's undertook two ten-minute pumping sessions per day for twelve weeks. The additional penis length was an unexpected side effect and not an intended aim of the study, but large enough to be statistically significant.[3]

Stretching consists of attaching a penis stretcher or "extender" device to the penis for set periods of time. The device exerts a constant traction on the penis, which, in theory, lengthens and widens the penis. The traction supposedly causes the cells in the penis to divide and expand. In 2002 a study published in the International Journal of Impotence Research concluded that penis extender devices are effective at elongating the penis and furthermore increases the penis length in correlation with the amount of time the device is worn.[4] A study conducted at the University of Turin and published in 2009 in the British Journal of Urology showed similar results, using a penile extender exerting a continuous and gradually increasing traction force on the penis. The device consists of a plastic ring, where the penis is introduced, with two dynamic metallic rods which produce the traction.[5] After using the device at least four hours daily for six months, the mean gain in length in flaccid state was 2.3 cm, with significantly improved erectile function scores and treatment satisfaction scores of "acceptable" to "good improvement" in all items, except for penile girth, where there was no significant measurable or subjective changes.[5] However, the study population only included patients with inadequate penile dimensions,[5] so it remains uncertain whether the same effects would occur on all subjects.

Jelqing and "jikok" is a penis enlargement method intended to make the penis larger by "exercising" tissues in the penis, with the goal of permanently increasing the maximum erect size of the penis. This technique, also called "milking", involves wrapping the thumb and index finger around the penis while semi-erect and repeatedly drawing them away from one's body to force blood into the glans, thus encouraging more vascularity in the corpus cavernosum and associated tissues.[6]

There are many products (tools, instructions, etc.) that one can buy; however, much of what they offer (instructions) is available on forums and free websites. However, this information is usually not composed or supported by medical professionals, and thus can be inaccurate.

Jelqing is typically preceded by a warm-up with a hot compress on the genitals, and concluded the same way. The reasoning behind the 'warm-up' mimics the normal operation of the biological processes of the penis during the four stages of arousal.[7] The third stage is heat.[7] Jelqing is generally considered the safest method of penis enlargement, with the most common side effect being the dreaded "turkey necking" of the penis, which is harmless but often considered cosmetically undesirable[citation needed].

Clamping is a risky and dangerous technique.[8] The goal of clamping is to increase the girth of the penis. This enlargement technique uses a constricting device, such as a shoe string, cable clamp, or a tight cock ring. The device is firmly tied, clamped, or put, respectively, on the base of the erect penis while "edging" (extended masturbation) with a firmly erect penis. Use of a metal cock ring is not advised because trapped blood engorging the penis can make it impossible to remove without amputation or emergency intervention such as sawing the ring off. Clamping is considered extremely dangerous by both practitioners and the medical community as it can cause permanent catastrophic damage to the penis.

Hanging is perhaps the oldest self-applied method of penis enlargement. Weight hanging consists of attaching a device (usually a rope or a strap) that grips the glans or just behind the glans and allows a weight to be suspended for a specific amount of time. Then a conscious effort is made to exercise the penis by raising the weight in repetitions (lasting no more than 5 to 10 minutes at a time) starting with the smallest and lightest weight 1/16 pound to the heaviest usually 1/4 pound or more, to increase the strength and stamina as well as elongation of the penis.

Weight hanging, however, can also carry serious risks, which include nerve damage, chronic pain, scarring and impotence. The idea behind weight hanging is to stretch the tunica albuginea and other various tissues of the penis. The general effect is to elongate the penis, although widening can also occur, commonly at the base of the penis.[9]

Hanging carries additional health risks due to the restriction of blood flow to the glans, including testicular cancer. Many tribal practitioners of weight hanging are impotent,[citation needed] although urination is unaffected.