Hercules vs. the Moon Men

Hercules vs. the Moon Men 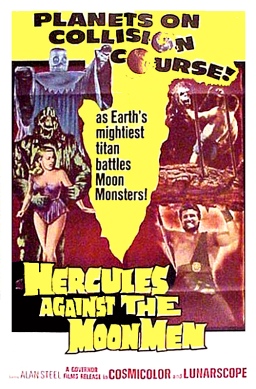 caption = A promotional film poster for "Hercules Vs. the Moonmen."
director =
producer =
writer =

"Hercules Against the Moon Men" (1964) is an Italian/French film. It was directed by and starred Alan Steel (real name ) and .The film runs for 90 minutes and is dubbed.It was also shown on "", making it infamous for its "Deep Hurting" Sequence (the very long sandstorm sequence). This sequence involved many of the cast floundering around pointlessly in a sandstorm for upwards of five minutes of screen time, in which no plot movement or character development is made at all.

In ancient Greece a race of evil aliens from the moon land on earth. For years they've terrorized the nearby city of Samar, demanding children for sacrifice. Now, the queen of Samar has made a pact with the moon men to conquer the world and become the most powerful woman alive. However, the residents of Samar, sick of all the chaos, cheer when the mighty shows up to put a stop to it all.

Strangely, the film "blends" elements from a number of mythologies. Roman, Greek, Ancient Eygptian and Cretan elements are all thrown in.

In the original Italian language version, the hero was not Hercules but , and its original Italian title was "Maciste e la regina di Samar" (Maciste and the Queen of Samar). Its French title was "Maciste contre les hommes de pierre" (Maciste Against the Men of Stone), but the English distributors dubbed him to be Hercules, because Maciste, originally a hero in silent Italian cinema, was not well-known to American audiences.

*The film has received numerous 'bargain box' releases from various studios.
*The MST3K version of the film was released by Rhino Home Video as part of the 'Collection, Volume 7' box set.