The Jersey Evening Post (or JEP, as it is locally called) is a regional newspaper published six days a week in the Bailiwick of Jersey. It was printed in broadsheet format for 87 years, though it is now of compact (tabloid) size. Its motto is: "At the heart of island life".

The Evening Post was founded in 1890 by H.P. Butterworth, although it was acquired only a few weeks after its launch by Walter Guiton, whose business printed it.

The Post was produced sheet by sheet on a flatbed press until 1926, when Guiton oversaw the introduction and operation of the first rotary press. Guiton remained the main proprietor and editor until the following year, when his son-in-law Arthur Harrison took over. The latter stayed in both positions until he was succeeded in 1944 by his son, Arthur G. Harrison. Under the Harrisons, the newspaper, while undergoing little technical change, saw testing times as the island came under German military occupation from 1940 to 1945. Although it was still published during these years, the Post was strictly supervised and censored by the occupying forces.

After the island's liberation in 1945, the newspaper grew and in 1957 became the main asset of a newly formed business entity called W E Guiton and Co Ltd.

Following the closure of the Morning News in 1949, the Evening Post has been without a regular English-language competitor, and the closure of the French-language newspaper Les Chroniques de Jersey at the end of 1959 left the Evening Post as the only newspaper of record in Jersey to publish the Jersey Gazette of official notices and promulgation of laws.

Control of the paper passed in 1973 to Frank Walker, who would later become Jersey's first chief minister. The Guiton Group expanded outwards from newspaper production in the late 1970s into IT, through its subsidiary company Itex. In 1998 it purchased the Guernsey Evening Press and Star. Guiton Group was then itself purchased in 2004 by Claverley Media, publishers of the Wolverhampton Express and Star. 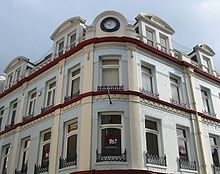 Until the newspaper moved to Saint Saviour in 1977, it was based in Saint Helier. The distinctive façade of the former offices at the corner of Charles Street and Bath Street pictured here is still recalled in the Under the Clock column of miscellany. 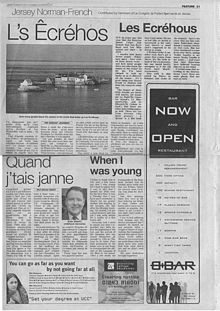 From 14 March 1982[2] until 2007 the Jèrriais articles were accompanied by a parallel translation in English.

The Jèrriais - Jersey's native language column hosts articles written in Jersey's dialect of Norman, Jèrriais, accompanied by a précis and vocabulary in English.

In 1911 Philippe Le Sueur Mourant (1848–1918) launched a new series of stories in the Morning News relating the adventures and opinions of Piteur Pain, supposedly a former country blacksmith turned foreman of the printing shop, and his family. This series of stories moved to the Evening Post between 1915 and 1916.

Following the closure of Les Chroniques de Jersey, the Ph'lip et Merrienne articles started appearing in the Evening Post from 2 January 1960. Written by Edward Le Brocq (1877–1964), who had worked for the Evening Post before becoming editor of the Morning News, they took the form of a letter to the editor supposedly written by an old farming couple from St. Ouen commenting on personalities, events and elections laced with humorous observations on Jersey history and traditions.

Following the death of Edward Le Brocq, George Francis Le Feuvre (1891–1984) contributed a Lettre du Bouonhomme George under the pen name George d'la Forge. Since he had emigrated to North America after the First World War and subsequently taken United States citizenship, most of the letters had either an international flavour, commenting on life and politics in America, or nostalgia for the Jersey of Le Feuvre's boyhood.

Following the death of George d'la Forge, Sir Arthur de la Mare (1914–1994), a retired ambassador, took over the task of contributing regular columns to the newspaper. Written in the Trinity dialect, as distinct from the St. Ouen dialect used by George d'la Forge, Sir Arthur's articles included reminiscences of his life as a diplomat, especially in the Far East, as well as comments on events and politics in Jersey.

Since Sir Arthur's death, a roster of contributors have maintained the tradition of the weekly (or fortnightly) newspaper column. Currently the writer of this feature is Geraint Jennings.