NMR has advantages over the other method for high-resolution nucleic acid structure determination, X-ray crystallography, in that the molecules are being observed in their natural state of being in solution, rather than in a crystal lattice which may affect the molecule's structural properties. It is also possible to investigate dynamics with NMR. This comes at the cost of slightly less accurate and detailed structures than crystallography.[1]

Nucleic acid NMR uses techniques similar to those of protein NMR, but has several differences. Nucleic acids have a smaller percentage of hydrogen atoms, which are the atoms usually observed in NMR, and because nucleic acid double helices are stiff and roughly linear, they do not fold back on themselves to give "long-range" correlations. Nucleic acids also tend to have resonances distributed over a smaller range than proteins, making the spectra potentially more crowded and difficult to interpret.[2]

Nucleic acid NMR is useful for molecules of up to 100 nucleotides. As of 2003, nearly half of all known RNA structures had been determined by NMR spectroscopy.[3]

1H and 31P have near 100% natural abundance, while 13C and 15N have low natural abundances. For these latter two nuclei, there is the capability of isotopically enriching desired atoms within the molecules, either uniformly or in a site-specific manner. Nucleotides uniformly enriched in 13C and/or 15N can be obtained through biochemical methods, by performing polymerase chain reaction using dNTPs or NTPs derived from bacteria grown in an isotopically enriched environment. Site-specific isotope enrichment must be done through chemical synthesis of the labeled nucleoside phosphoramidite monomer and of the full strand; however these are difficult and expensive to synthesize.[3][5]

Because nucleic acids have a relatively large number of protons which are solvent-exchangable, nucleic acid NMR is generally not done in D2O solvent as is common with other types of NMR. This is because the deuterium in the solvent would replace the exchangeable protons and extinguish their signal. H2O is used as a solvent, and other methods are used to eliminate the strong solvent signal, such as saturating the solvent signal before the normal pulse sequence ("presaturation"), which works best a low temperature to prevent exchange of the saturated solvent protons with the nucleic acid protons; or exciting only resonances of interest ("selective excitation"), which has the additional, potentially undesired effect of distorting the peak amplitudes.[1] 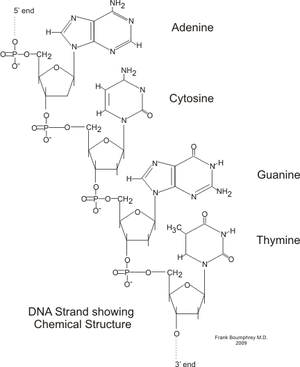 The chemical structure of DNA nucleotides. Nuclear magnetic resonance methods detect couplings between atoms which are either connected by bonds or are close in space to determine the overall three-dimensional structure of a nucleic acid molecule.

The exchangeable and non-exchageable protons are usually assigned to their specific peaks as two independent groups. For exchangeable protons, which are for the most part the protons invilved in base pairing, NOESY can be used to find through-space correlations between on neighboring bases, allowing an entire duplex molecule to be assigned through sequential walking. For nonexchangable protons, many of which are on the sugar moiety of the nucleic acid, COSY and TOCSY are used to identify systems of coupled nuclei, while NOESY is again used to correlate the sugar to the base and each base to its neighboring base. For duplex DNA nonexchangeable protons the H6/H8 protons on the base correlate to their counterparts on neighboring bases and to the H1' proton on the sugar, allowing sequential walking to be done. For RNA, the differences in chemical structure and helix geometry make this assignment more technically difficult, but still possible. The sequential walking methodology is not possible for non-double helical nucleic acid structures, nor for the Z-DNA form, making assignment of resonances more difficult.[1][2]

Parameters taken from the spectrum, mainly NOESY cross-peaks and coupling constants, can be used to determine local structural features such as glycosidic bond angles, dihedral angles (using the Karplus equation), and sugar pucker conformations. The presence or absence of inimo proton resonances, or of coupling between 15N atoms across a hydrogen bond, indicates the presence or absence of basepairing. For large-scale structure, these local parameters must be supplemented with other structural assumptions or models, because errors add up as the double helix is traversed, and unlike with proteins, the double helix does not have a compact interior and does not fold back upon itself. However, long-range orientation information can be obtained through residual dipolar coupling experiments in a medium which imposes a weak alignment on the nucleic acid molecules.[1][3]

NMR is also useful for investigating nonstandard geometries such as bent helices, non-Watson–Crick basepairing, and coaxial stacking. It has been especially useful in probing the structure of natural RNA oligonucleotides, which tend to adopt complex conformations such as stem-loops and pseudoknots. Interactions between RNA and metal ions can be probed by a number of methods, including observing changes in chemical shift upon ion binding, observing line broadening for paramagnetic ion species, and observing intermolecular NOE contacts for organometallic mimics of the metal ions. NMR is also useful for probing the binding of nucleic acid molecules to other molecules, such as proteins or drugs. This can be done by chemical-shift mapping, which is seeing which resonances are shifted upon binding of the other molecule, or by cross-saturation experiments where one of the binding molecules is selectively saturated and, if bound, the saturation transfers to the other molecule in the complex.[1][3]

Dynamic properties such as duplex–single strand equilibria and binding rates of other molecules to duplexes can also be determined by its effect on the spin–lattice relaxation time T1, but these methods are insensitive to intermediate rates of 104–108 s-1, which must be investigated with other methods such as solid-state NMR. Dynamics of mechanical properties of a nucleic acid double helix such as bending and twisting can also be studied using NMR. Pulsed field gradient NMR experiments can be used to measure diffusion constants.[1][3][6]

Early nucleic acid NMR studies were preformed as early as 1971, and focused on using imino proton resonances to probe base pairing interactions, such as in tRNA. With the advent of oligonucleotide synthesis, the first NMR spectrum of double-helical DNA was published in 1982, and methods for sequential assignment of the resonances were published the following year.[2]