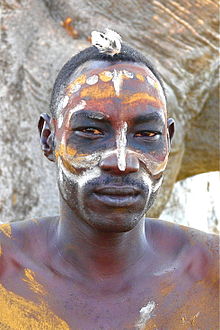 Nuba is a collective term used here for the peoples who inhabit the Nuba Mountains, in Sudan, Africa. Although the term is used to describe them as if they composed a single group, the Nuba are multiple distinct peoples and speak different languages. Estimates of the Nuba population vary widely; the Sudanese government estimated that they numbered 1.07 million in 2003.

Leni Riefenstahl, better known for directing Triumph of the Will and Olympia, published a collection of her photographs of the peoples titled The Last of the Nuba in 1976.

Awarded Australian born photographer Jack Picone also photographically documented the lives of the Nuba people between 1994 - 1998. The series of images called "The Nuba" can be seen online here: http://www.jackpiconeportfolio.com/#a=0&at=0&mi=2&pt=1&pi=10000&s=0&p=2

The Nuba people reside in the foothills of the Nuba mountains. Villages consist of family compounds, and the men's house (Holua) in which unmarried men sleep. A family compound consisting of a rectangular compound enclosing two round mud huts thatched with sorghum stalks facing each other called a shal. The shal was fenced with wooden posts interwoven with straw. Two benches ran down the each side of the shal with a fire in the middle were families will tell stories and oral traditions. Around the shal was the much larger yard, the tog placed in front. The fence of the tog was made of strong tree branches as high as the roof of the huts. Small livestock like goats and chickens and donkeys were kept in the tog. Each compound had tall conical granaries called durs which stood on one side of the tog. At the back of the compound was a small yard were maize and vegetables like pumpkin, beans and peanuts were grown. For families that were small a compound was not needed and a mud hut with a fence would be enough. The entrance was as large as a man so people had to climb the ladder and dive in to get grain. Inside the houses there was very little furniture, only a bamboo bed frame with a baobab rope mat on top and the hearth in the middle with firewood. Possessions and tools were hung or leaned against the wall. A small garden behind the house was used to grow vegetables like beans and pumpkin while sorghum and peanuts were grown away in the hills. A mans wealth is measured by cattle so they are kept in a enclosure called a coh for cows and a cohnih for calves. The Nuba people eat sorghum as their staple. It is boiled with water or milk to make kal eaten with meat stew called waj. Corn is also roasted and eaten with home made butter. The main religion of the Nuba is islam although the old shamanistic beliefs still prevail. Men wear a sarong and occasionally a skull cap. Young men remained naked while children even girls wore only a string of beads. Older women and young women wore beads and wrap a sarong over their legs and sometimes a cloak tie on the shoulder. Both sexes practise scarification and circumcision. Men shave their heads, older men wear beards, women and girls braid their hair in strands and string it with beads. The Nuba speak a language related to Dinka and other Nilo-Saharan languages.

The Nuba people are primarily farmers, as well as herders who keep cattle, goats, chickens, and other domestic animals. They often maintain three different farms: a garden near their house where vegetables needing constant attention, such as onions, peppers and beans, are grown; fields further up the hills where quick growing crops such as red millet can be cultivated without irrigation; and farms farther away, where white millet and other crops are planted. A distinctive characteristic of the Nubas is their passion for athletic competition, particularly traditional wrestling. The strongest young men of a community compete with athletes from other villages for the chance to promote their personal and their village’s pride and strength. In some villages, older men participate in club- or spear-fighting contests. The Nubas’ passion for physical excellence is also displayed through the young men’s vanity—they often spend hours painting their bodies with complex patterns and decorations. This vanity reflects the basic Nuba belief in the power and importance of strength and beauty.

The majority of the Nuba—those living in the east, west and northern parts of the mountains—are Muslims, while those living to the south are either Christians or practice traditional animistic religions. In those areas of the Nuba mountains where Islam has not deeply penetrated, ritual specialists and priests hold as much control as the clan elders, for it is they who are responsible for rain control, keeping the peace, and rituals to insure successful crops. Many are guardians of the shrines where items are kept to insure positive outcomes of the rituals (such as rain stones for the rain magic), and some also undergo spiritual possession.

In the 1986 elections, the Umma Party lost several seats to the Nuba Mountains General Union and to the Sudan National Party, due to the reduced level of support from the Nuba Mountains region. There is reason to believe that attacks by the government-supported militia, the Popular Defense Force (P.D.F.), on several Nuba villages were meant to be in retaliation for this drop in support, which was seen as signaling increased support of the S.P.L.A. The P.D.F. attacks were particularly violent, and have been cited as examples of crimes against humanity that took place during the Second Sudanese Civil War (Salih 1999).

The Nuba Mountain People of Sudan

The Nuba people reside in one of the most remote and inaccessible places in all of Sudan, the foothills of the Nuba Mountains in central Sudan. At one time the area was considered a place of refuge, bringing together people of many different tongues and backgrounds who were fleeing oppressive governments and slave traders. As a result, over one hundred languages are spoken in the area and are considered Nuba languages, although many of the Nuba also speak Sudanese Arabic, the official language of Sudan.

The Nuba Mountains mark the southern border of the sands of the desert and the northern limit of good soils washed down by the Nile River. Many Nubas, however, have migrated to the Sudanese capital of Khartoum to escape persecution and the effects of Sudan’s civil war. Most of the rest of the 1,000,000 Nuba people live in villages of between 1,000 and 50,000 inhabitants in areas in and surrounding the Nuba mountains. Nuba villages are often built where valleys run from the hills out on to the surrounding plains, because water is easier to find at such points and wells can be used all year long. There is no political unity among the various Nuba groups who live on the hills. Often the villages do not have chiefs but are instead organized into clans or extended family groups with village authority left in the hands of clan elders.

The War in the Mountains

After some earlier incursions by the SPLA, the Sudanese civil war started full scale in the Nuba Mountains when the Volcano Battalion of the SPLA under the command of the Nuba Yousif Kuwa Mekki and Abdel Aziz Adam al-Hillu entered the Nuba Mountains and began to recruit Nuba volunteers and send them to SPLA training facilities in Ethiopia.The volunteers walked to Ethiopia and back and many of them perished on the way.
During the war, the SPLA generally held the Mountains, while the Sudanese Army held the towns and fertile lands at the feet of the Mountains, but was generally unable to dislodge the SPLA, even though the latter was usually very badly supplied. The Governments of Sudan under Sadiq al-Mahdi and Omar al-Bashir also armed militias of Baggara Arabs to fight the Nuba and transferred many Nuba forcibly to camps.

In early 2002 the Government and the SPLA agreed on an internationally supervised ceasefire. International observers and advisors were quickly dispatched to Kadugli base camp and several deployed into the mountains to co-located with SPLA command elements. The base camp at Kauda for several observers included Swiss African advisor, French diplomat, an Italian and an American former US Army officer.

At that time, Abdel Aziz Adam al-Hillu was the governor of Nuba Mountains. During the course of the following months, relief supplies from the UN were air dropped to stem the starvation of many in Nuba Mountains.

The ceasefire in Nuba Mountains was the foundation for the Comprehensive Peace Agreement (CPA) signed in January 2005. This fragile peace remains in force, but infighting in the south, plus the Government of Sudan involvement in Darfur have resulted in issues which may break the peace agreement.

The south will vote on whether to secede from Sudan and form its own country in 2011. This provision was agreed to in the Comprehensive Peace Agreement (CPA). 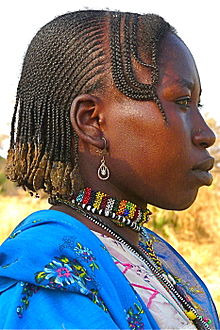