Novy Vzglyad, (which literally translates as New Look or New View, in Russian: "Новый Взгляд") is a weekly newspaper published in Moscow, Russia. It used to be well known for its commentaries on politics and social issues[4][5][6] in 1990s.

It was founded in early 1992 by VID (originally created as a voice for the TV show with the same name). Later Kirsan Ilyumzhinov bought the newspaper and merged it with the another journal. It is currently owned by him and former TV host (of Vzglyad show) Yevgeny Dodolev.

Starting as a weekly, the Novy Vzglyad is now published 45 times per year, with seven of these issues covering two-week spans.

The newspaper is in financial straights.

Although the Novy Vzglyad never lost its touches of humor, it soon established itself as a pre-eminent forum for serious journalism. On issues of civil rights and individual liberties, it is consistently liberal. The most prominent Russian writers wrote for the publication, including Vitaly Korotich, Alexander Prokhanov, Valeriya Novodvorskaya, Eduard Limonov[7][8][9][10] and his spouse Natalya Medvedeva (which introduced herself as Novy Vzglyad representative in Paris).[11][12][13][14][15][16][17][18] 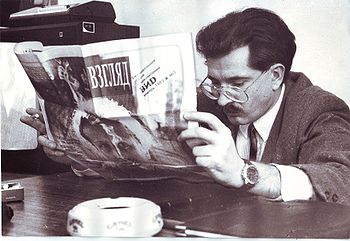 Novy Vzglyad has a long track record of creating scandals, earning itself the moniker "Dirtdigger" (in Russian, Грязекопатель). Printing some comments were deemed "hooliganism" by the Moscow deputy prosecutor, who, despite Dodolev's independence from state bureaucracies tried to pressure the newspaper out of business in 1993 and 1994.

In 1993, Yaroslav Mogutin, one of the country’s few openly gay journalists, was arrested, held overnight in jail, and charged with "hooliganism" for using profane language in an interview with a prominent gay dancer that was published in Novy Vzglyad, a weekly nationalist newspaper distributed as a supplement to Moskovskaya Pravda. Charges were also filed against the weekly, even though the use of profane language had become quite common in many papers, including the high-circulation Moskovskij Komsomolets. The case was eventually dropped, but not before Mogutin and his partner were harassed by local policemen who would repeatedly come to their apartment in the middle of the night to extort money, threatening the couple with criminal prosecution if they did not comply.

... from alcohol: Don't you think so?" Yanayev told the newspaper Novy Vzglyad. Yanayev and 11 others are to go on trial on April 14 ... prepared in the KGB, and that the current Russian Defense Minister, Pavel Grachev, took part in drafting it.

Zhirinovsky complained to an interviewer from the Moscow journal Novy Vzglyad: Where was I born now? In a foreign country, it seems.

In 1995, after Mogutin published an article on the war in Chechnya in the January issue of Novy Vzglyad, the Judicial Chamber held two hearings on his writings and accused Mogutin of violating Article 74-1 of the Penal Code, which calls for a prison term of up to 7 years for "incitement of ethnic hatred, corruption of public morals and defamation of the Motherland." The Chamber recommended that the state shut down Novy Vzglyad, revoke its publishing license, and launch a criminal case against Mogutin. Based on this recommendation, the prosecutor’s office opened an investigation against him in April 1995. As a result of the continuing harassment, Mogutin went to the United States to seek asylum.[27]

Russian media have depicted the Chechen nation as thugs and bandits responsible for organized crime and street violence in Russia. Russian "journalist" Mogutin wrote in the journal Novy Vzglyad (A New Glance) of the Chechen nation "that it had given the world absolutely nothing except international terrorism and drugs business" and he remarked also "that any Russian feels towards the Chechens a zoological, genetic, animal hatred."

After this publication its author (Slava Mogutin) forced to leave Russia.[29][30][31][32][33][34][35][36] Mogutin was granted political asylum in the US with the support of Amnesty International and PEN American Center. Upon his arrival in New York City, he shifted his focus to visual art and became an active member of the downtown art scene. Since 1999, his photography has been exhibited internationally and featured in a wide range of publications including BUTT, The New York Times, The Village Voice, i-D, Visionaire, and L’Uomo Vogue.

In 1995 the weekly newspaper grown into publishing house (publishing company). During 1995-1999 Novy Vzglyad Publishing House published nine magazines and periodicals (print and online) in Russia and CIS countries. It ended its four-year print run for magazines, due to economic difficulties of 1998 Russian financial crisis.

Its headquarters and printing plant are located in Moskovskaya Pravda building (Moscow). Since 2000 NVPH’s portfolio includes only three newspaper including Muzykaljnaya Pravda weekly.[38]

Valeriya Novodvorskaya has released few books that are supplemented with the publications from the Novy Vzglyad newspaper[39] (ISBN 978-5-8159-0893-2).