JSC PO Sevmash (Russian: ОАО «ПО „Севмаш“», Севмаш, СМП) is a shipbuilding company based in Severodvinsk, a port city on Russia's White Sea. The name Sevmash is an abbreviation of Severnoye Mashinostroitelnoye Predpriyatie (Северное Машиностроительное Предприятие), i.e. "Northern Machine-Building Enterprise". Sevmash is the largest shipbuilding enterprise in Russia and today the country's only nuclear submarine producer. In 2009, the company employed 26,951 people and its revenue from military production was $533.02 million.[1] 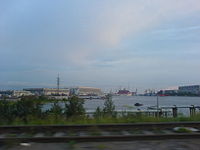 The shipyad's main specialization is manufacturing of ships, submarines and military equipment for the Russian Navy. Sevmash is the only shipyard in Russia producing nuclear submarines.[2] The next to last nuclear submarine produced at the shipyard is the nuclear powered attack submarine Severodvinsk, which was launched in 2010 and is currently fitting out.[3] Its completion had been delayed due to financial issues. The second Borei class submarine Aleksandr Nevskiy was launched later in 2010. There is one other Yasen class submarine Kazan and one Borei class submarine Vladimir Monomakh currently under construction at the shipyard.[2] In 2003—2005, Sevmash delivered two Project 636 (Kilo class) diesel-electric submarines to foreign customers.[4] As of 2009, the company has an order for a further two Project 636 vessels.[5]

Under a contract for Rosoboronexport, Sevmash is completing repair and modification work on the former Soviet heavy aircraft carrying cruiser Admiral Gorshkov, transforming it into a modern aircraft carrier named INS Vikramaditya for the Indian Navy.[6] The project has been hit by delays and increasing costs, and is expected to be completed in 2012.[7]

President Dmitry Medvedev with a model of the Shtokman platform in July, 2009

An increasingly important product line for the shipyard is production for oil and gas fields projects on the Arctic shelf,[3] including oil platforms.[8] The Prirazlomnaya ice-resistant stationary platform designed by the Rubin Marine Equipment Design Bureau and being built at the shipyard is the first of its kind in Russia. It is due to start operations in the Pechora Sea. Sevmash has also delivered platforms for foreign companies, such as the marine semi-submerged MOSS CS-50 platform for the Norwegian Moss Mosvold Platforms AS company, which was finished in February 2006.[4] Sevmash has received orders for 3 further platforms of this type.[4] Sevmash is also building a platform for the mid-Barents Sea Shtokman gas field.[8]

The enterprise is also engaged in commercial shipbuilding, and has during the last decade built over 100 vessels, including sea and harbor tugs, mini-bulkers, pontoons, barges and fish farms.[2] It also produces metallurgical equipment and rail transportation items.[2]

Sevmash has a work force of 26,951 people.[1] Based in the city of Severodvinsk in Arkhangelsk Oblast on the White Sea, its facilities occupy an area of more than 300 hectares and it has more than 100 subdivisions.[9] It is the largest shipbuilding enterprise in Russia.[8] Since August, 2007, Sevmash has been headed by Nikolai Yakovlevich Kalistratov.[10]

The company's revenue from military production in 2009 was estimated to be $533.02 million, up from $431.04 million in 2008. Civilian production amounted to 20% of the company's total revenue, and export share of total production was 10%, according to figures published by Centre for Analysis of Strategies and Technologies.[1] The centre ranked Sevmash as the 7th most successful enterprise of the Russian defense industry in 2009, based on a comparison of key financial and operational indicators.[1]

The construction of the enterprise had its origins in the first 5-year plan when the decision was made to significantly expand shipbuilding capacity. The building of what became SEVMASH began in 1936. The shipyard was developed as part of Stalin's industrialization program and a forced labor camp, part of gulag archipelago, was responsible for the initial construction of its facilities along the left bank of the Nikolskiy Estuary at the mouth of the Severnaya Dvina River[11]. The official establishment date is 21 December 1939, when the hull of its first ship, the battleship Sovetskaya Belorussiya was laid down. [12]. The enterprise was initially known in Soviet times as Shipyard Number 402.[13] During World War II, the company was involved in repairing battleships and producing turret artillery units and mine-sweeping equipment.[14] Also during the war years the enterprise built large mine hunters, destroyers, diesel-electric submarines, ferries, lighters, floating repair barges, while repairing both Northern Fleet surface ships as well as vessels delivering supplies via the Arctic Convoys. By 1950 the shipyard had repaired 139 ships and vessels.[15] In the early 1950s, large-scale production of submarines was launched.[14] In 1969, the company produced world's first nuclear submarine with a titanium alloy body, Project 661. In the mid 1970s, its facilities underwent major reconstruction; its industrial capacity was doubled and it had Russia's largest covered slipway installed. Nuclear submarine cruiser Project 941, built in 1981, entered the Guinness World Records as the world's biggest submarine at the time.[14] During its history, the company has built 45 surface ships and 163 submarines, including 128 nuclear submarines.[3]