The Nizam's Guaranteed State Railway was a Railway Company in India between 1879 to 1950, and was owned by the Dominion of Nizam or better known as the Hyderabad State.

The full style of the system was His Exalted Highness, The Nizam's Guaranteed State Railway (NGSR) which had its beginnings in a line built privately by the Nizam, to the dismay of the British authorities. It was owned and worked by a company under a guarantee from the Hyderabad State, and the same company works the metre-gauge line, capital for which was raised by the issue of redeemable mortgage debentures.

The Nizam Railway was built 1879. It was categorized under Indian States Railways were those built or promoted, often on similar terms to those above, by the various Princely States as by the British India. Its presence was observed in the Nizam State and the Madras Presidency of British India. From Wadi on the Great Indian Peninsula Railway, the Nizam's Guaranteed State Railway runs east to Warangal and then south-east towards Bezwada on the East Coast section of the Madras Railway. The total length of the main line is 310 miles, while two branches from Husain Sagar to Hyderabad and from Dornakal to the Singareni coalfields add 20 miles. Hyderabad-Godavari Valley Railways (metre gauge) runs for 391 miles north-west from Hyderabad city to Manmad on the north-eastern section of the Great Indian Peninsula Railway. The State thus contains 467 miles on the broad gauge, all built before 1891, and 391 miles on the narrow gauge, opened between 1899 and 1901.

The Singareni coal fields were served by branch line from Dornakal Junction, a distance of 30 km.

Beginning in 1932 scheduled bus services – under the auspices of the railway administration – began over 450 km with 27 vehicles. Within a decade, at a total expenses of 7½ million HRs. this was extended to nearly 500 vehicles, servicing 7200 km.[2] 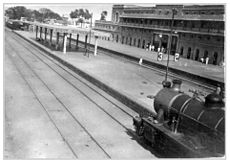 A locomotive at the Secunderabad Station (circa 1928)

Being one of the largest princely states of India, the Nizam of the Hyderabad State wanted to build a railway line to connect the Hyderabad with the rest of the British India (now India). This Railway line was to be built from Secunderabad Railway Station, Hyderabad, India. The Nizam bore all the expenses for the construction of the line.

The south-western corner of the State is crossed for 137 miles by the broad-gauge line from Bombay to Madras. About 120 miles of this line belong to the south-eastern section of the Great Indian Peninsula, while the remainder is part of the north-western branch of the Madras Railway, the junction being at Raichur. 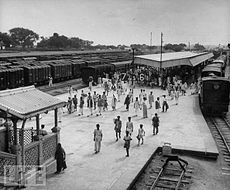 The proposed line was to built between Secunderabad Railway Station-Wadi initially. The earliest sections of the NGSR were commenced during the 1870s, variously financed, constructed and operated. The construction commenced in 1870. After four years of construction works, in 1874, the Secunderabad-Wadi Line was built with financing. Later in 1879, the Nizam took over this railway line and was managed by the state owned Nizam's Guaranteed State Railway under the Nizam.

In 1883, a management company was formed to gradually take over these lines, under the provision of a guarantee from the Government of HEH the Nizam of Hyderabad State..Later in 1889,this line was extended to Vijayawada Junction as Vijayawada-Wadi line.In 1899, BG connection between Bezwada (Vijayawada) and Madras (Chennai Central) opens making rail travel between Hyderabad and Chennai possible.

In 1916, another railway termini, Kachiguda Railway Station was built to serve the railway as its headquarter. In 1930, the State of Hyderabad assumed operational control of the system.In 1950, the NGSR was nationalised and in 1951 became part of Central Railway, a zone of Indian Railways.

The District is well favoured as regards railways. The Nizam's State Railway crosses it from east to west, with six stations, and the Hyderabad-Godavari Valley line starting from Hyderabad has one station within its limits. The total length of railways is about 98 miles.

The Hyderabad-Godavari Valley Railway traverses the Railways. District from the north-west to the south for 80 miles, with ten railway stations within its limits.

The Nizam's Guaranteed State Railway enters Medak from the west at Gullaguda and passes out at Lingampalli in the east, a distance of 22 miles. The Hyderabad-Godavari Valley Railway runs almost due north and south through Manoharabad, Masaipet, and Mirzapalli on the eastern border of the District.

The Great Indian Peninsula Railway passes through the south-western portion of the Makhtal taluk, with one station.

The Nizam's Guaranteed State Railway traverses the Bhonglr taluk from west-south-west to east-north-east for a distance of 21 miles, with five stations in the District.

The Nizam's Guaranteed State Railway traverses the District from Jangaon in the west, through Kazipett and Warangal, to Yerrupalayam in the east, a distance of 146 miles, with 17 stations within the District, besides the mineral line, 16 miles long, from Dornakal to Yellandlapad, making a total of 162 miles.

The Hyderabad-Godavari Valley Railway traverses Aurangabad from west to east, for no miles, with eleven railway stations within the District.

The Hyderabad-Godavari Valley Railway traverses the District from east to west for a distance of 63 miles, and has 9 stations within its limits.

The Hyderabad-Godavari Valley Railway traverses the District from east to west for 40 miles, with six stations.

The Great Indian Peninsula Railway line enters the District at Dudneh in the west and leaves it near Wadi junction, with a length of 50 miles. The Nizam's Guaranteed State Railway, starting from Wadi junction, runs north-east and east for 115 miles.

The south-west corner of the District is crossed by the Southern Mahratta Railway.

The Great Indian Peninsula Railway line passes through a minute portion of the taluk of Tuljapur. Barsi, in the Bombay District of Sholapur, on the Barsi Light Railway, is the nearest station to the District head-quarters, from which it is 32 miles distant. There are two stations on the same line at the villages of Sendri and Uptai in the Parenda taluk.

The town of Raichur is the junction of the Great Indian Peninsula and the Madras Railways, which cross the District from north to south for 62 miles, with eight stations in the District.

There is no mention of railways under Karimnagar, Adilabad, Bhir and Bidar districts; obviously they had no railways through them as in 1909.

Tramways were depicted in many maps of those days, including that of Hyderabad in the Imperial Gazetteer of India, 1909.[3]

Both, 20–25 km long, one in Adilabad district and the other in Karimnagar and Warangal districts, close to rivers, obviously carried forest produce (timber?) and were closed before/during World War II.