Nitrogen generators and stations are stationary or mobile air-to-nitrogen production complexes. In advanced economies, membrane nitrogen plants have almost ousted alternative processes of nitrogen generation in all cases where nitrogen is not required in commercial volumes. 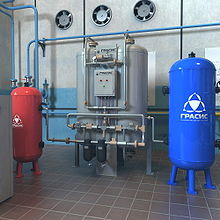 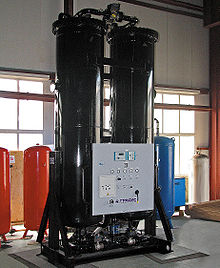 The adsorption gas separation process in nitrogen generators is based on the phenomenon of fixing various gas mixture components by a solid substance called an adsorbent. This phenomenon is brought about by the gas and adsorbent molecules' interaction.

The technology of air-to-nitrogen production with the use of adsorption processes in nitrogen generators is well studied and widely applied at industrial facilities for the recovery of high-purity nitrogen.

The operating principle of a nitrogen generator utilizing the adsorption technology is based on the dependence of the adsorption rates featured by various gas mixture components upon pressure and temperature factors. Among nitrogen adsorption plants of various types, pressure swing adsorption (PSA) plants have found the broadest application world-wide.

The system's design is based on the regulation of gas adsorption and adsorbent regeneration by means of changing pressures in two adsorber–adsorbent-containing vessels. This process requires constant temperature, close to ambient. With this process, nitrogen is produced by the plant at the above-atmospheric pressure, while the adsorbent regeneration is accomplished at below-atmospheric pressure.

Adsorption nitrogen generator plants allow production of high-purity nitrogen from air, which membrane systems are unable to provide – up to 99.9995% nitrogen. This nitrogen purity may also be ensured by cryogenic systems, but they are considerably more complex and justified only by large consumption volumes. The nitrogen generators use CMS (carbon molecular sieve) technology to produce a continuous supply of ultra high purity nitrogen and are available with internal compressors or without. 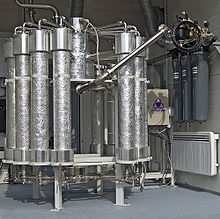 The operation of membrane systems is based on the principle of differential velocity with which various gas mixture components permeate membrane substance. The driving force in the gas separation process is the difference in partial pressures on different membrane sides. 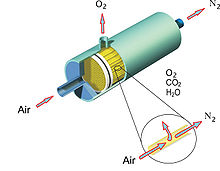 Flux distribution inside the fiber

Structurally, a hollow-fiber membrane represents a cylindrical cartridge functioning as a spool with specifically reeled polymer fibers. Gas flow is supplied under pressure into a bundle of membrane fibers. Due to the difference in partial pressures on the external and internal membrane surface gas flow separation is accomplished.

With respect to the simplicity of the system, a nitrogen generator can be split into modules. This is in direct contrast to classical systems where the equipment is designed for a certain stage of the separation process. Using a modular system, the generation facility may be built from a selection of preexisting equipment and where necessary, the output capacity of a plant may be increased at the minimum cost. This option appears all the more useful where a project envisages a subsequent increase in enterprise capacity, or where demand may simply require on site production of nitrogen by employing equipment that is already present.

Gas separation units have no moving component parts, thus ensuring the exceptional reliability of Company plants. Membranes are highly resistant to vibration and shocks, chemically inert to greases, moisture-insensitive, and capable of operating over a wide temperature range of –40°С to +60°С. With appropriate maintenance, membrane unit useful life ranges between 130,000 and 180,000 hours (15 to 20 years of continuous operation).

In the petroleum industry, nitrogen is an indispensable component in a number of processes. Most commonly, nitrogen is used to create an inert environment for preventing explosions and for fire safety and to support transportation and transfer of hydrocarbons. Additionally, nitrogen is used for pipeline testing and purging, cleaning technological vessels and cleaning liquefied gas carriers and hydrocarbon storage facilities.

The primary and very important application of nitrogen in chemical and petrochemical industries is the provision of inert environment aimed at ensuring general industrial safety during cleaning and protection of process vessels. Besides, nitrogen is used for pipelines pressure testing, chemical agents transportation, and regeneration of used catalysts in technological processes.

Paint and varnish production uses nitrogen for the creation of an inert environment in process vessels to ensure safety, as well as for oxygen displacement during packing in order to prevent polymerization of drying oils.

In pharmaceutical industry, nitrogen finds application in pharmaceuticals packaging, and ensuring against explosion and fire safety in activities where fine dispersed substances are used.

In electronics, nitrogen serves as an antioxidant in the manufacture of semi-conductors and electric circuits, heat treatment of finished products, as well as in blowing and cleaning.

In the glass production, nitrogen proves efficient as a cooling agent for bow oven electrodes, oxidation inhibitor during process procedures, as well as air cooler.