Nautilus-X (Non-Atmospheric Universal Transport Intended for Lengthy United States eXploration) is a multi-mission space exploration vehicle imagined by the Technology Applications Assessment Team by NASA. The spacecraft was designed for long duration (one to twenty four months) exo-atmospheric space journeys for a six people crew. In order to limit the effects of microgravity on human health, the spacecraft is to be equipped with a centrifuge.

The spacecraft itself is relatively cheap by space system standards[3] as it is projected to only cost US$3.7 billion. In addition, it may only need 64 months of work.[4]

The original goal of Nautilus-X is to be a stopover to long term missions for the Moon or Mars. To ease route planning of the whole mission, the station would be placed at the Lagrange point L1 or L3 of the Moon or Mars, depending on which location is to be visited.

It would also serve in case of emergency station and hospital for current mission crews[1][4].

The spacecraft is composed of a 6.5 by 14 metre main corridor. The spacecraft has a modular design, enabling it to be accommodated for any of a number of mission specific propulsion modules, manipulator arms, Orion or SpaceX Dragon docking ports and landing craft for destination worlds. In theory the engines and fuel can be swapped out depending on the mission. [5] The spacecraft is also composed of an industrial slide-out airlock unit and the command, control and observation deck.

On the other end of the docking port is the spacecraft's centrifuge which is equipped with an external dynamic ring-flywheel. Behind the centrifuge are water and dihydrogen-slush tanks, storage units, which serve as radiation mitigating for the crew in the centrifuge, by creating safe zones.[3][4] In the aft of the craft are the communication and propulsion systems. 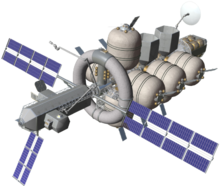 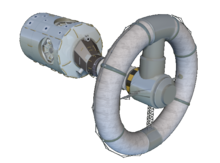 In order to deploy this huge spacecraft easily, it will consist of a variety of rigid and inflatable modules and solar dynamic arrays. The expandable modules are based on the technology used by the inflatable living quarters proposed by Bigelow Aerospace.[5]

Other innovations include facilities for a hydroponic farm and hangers for landing craft.

In order to assess and characterize influences and effects of the centrifuge relative to human reactions, mechanical dynamic responses and influences, the demonstration of a similar centrifuge is to be tested on the ISS. This demonstrator also utilizes Hoberman sphere inflatable and expandable structures.

If produced, this centrifuge will be the first in-space demonstration of sufficient scale centrifuge for artificial partial-g effects.[1] The demo would be sent using a single Delta IV or Atlas V launcher. The full cost of such demo would be between US$83 million and US$143 million. It should be operational in less than 39 months, i.e. as soon as 2013.[3]

The dimension of the demonstrator is for further study, but the two dimensions in debate are 9.1 metres (30 ft.) and 12.2 metres (40 ft.). The following table shows the partial-g gravity created by the centrifuge depending on its rotations per minute.

A kick motor (similar to the Hughes 376 spin-stabilizers used on ComSats) would be used to get the centrifuge to start and maintain the centrifuge's rotations. It will be designed to become a sleep module for the ISS crew.[1]