"Mr. Yin Presents" (stylized as "Mr. Yin Presents...") is the sixteenth and final episode of the fourth season of Psych, and the 63rd episode in the series overall. It premiered on March 10, 2010 on USA Network in the United States. The episode serves as the season 4 finale and is the sequel to the third season's finale, "An Evening with Mr. Yang". It is an important installment in one of the series' few story arcs. A third and final installment of the Yin/Yang series, entitled "Yang 3 in 2D", aired as the fifth season finale.

Shawn and Gus are attending a triple-feature of famous Alfred Hitchcock films, including (according to a playbill) The Birds, The Man Who Knew Too Much, and Psycho. After squeezing down a row of other patrons, Shawn finally is able to sit down, 20 minutes into Psycho. After finally finishing the films, they exit the theater and bump into Mary Lightly (Jimmi Simpson), one of the key figures in capturing Mr. Yang a year earlier. He takes them to a diner, where they discuss a new book written by Yang. Mary insists that, according to Yang's account of the events leading up to her capture, it was impossible that she was working alone. There had to have been a Yin. Shawn and Gus are skeptical, and leave the diner. Shawn rereads Yang's book but falls asleep. The next morning he and Gus are called to a crime scene. The waitress who had served them their pie at the diner had been found dead. Shawn notices that her body was arranged into a Yin/Yang symbol.

Shawn, Gus, Detective Lassiter, Detective O'Hara, and Mary arrive at the diner, where they find a pie marked with the Yin/Yang sign. Inside is a crossword clue, decoded by Officer McNab (Sage Brocklebank) to mean "Find Me." Mary insists that the events of the past day are the work of Yin. Shawn, Gus, and Mary visit Yang (Ally Sheedy) in prison. She reveals that she did have a partner, and that her partner is even more psychopathic than she is.

If you think I'm sick, you ain't seen nothing yet.
—Yang 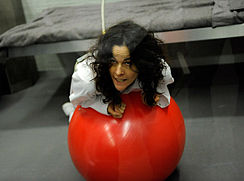 Shawn leads the group back to the theater, using the crossword to find a specific seat. Shawn remembers that the person who had sat in that seat was one of the people he had been forced to squeeze by when trying to get to his seat during the showing of Psycho. After discovering a note, Mary concludes that Yin is working alone, and that, being the opposite of Yang, represents chaos. After realizing that Yin must be basing his devious activities off of Hitchcock films, Gus proposes that they each take several Hitchcock films and watch them all so as to get a better idea what Yin will do next. The others agree, and split up. While watching Vertigo, Shawn falls asleep. During a dream, he sees Juliet, Lassiter, Chief Vick, and his father in classic Hitchcock situations encouraging him to find something. Finally, he sees the person in the theater. He remembers that the person in theater was wearing ankle weights, leading him to believe that Mary is Yin. When he is awakened by Gus, Shawn discovers that, while he was sleeping, someone had vandalized the "Psych" logo on the window to read "Psycho." Shawn believes it was Yin.

Shawn reveals his theory to the police. He urges them to keep Mary on the case and allow him to incriminate himself. When Mary suspiciously arrives with a note from Yin that was left on his doorstep, Lassiter and Juliet trace the clue to a fountain in the park. Meanwhile, Shawn and Gus take a detour to Mary's house. They find a ticket stub proving he had been in the theater and a closet that appears to be a shrine to Yang. At the park, Lassiter and Juliet reach the 39th stair (a reference to Hitchcock's The 39 Steps), but Mary stays behind, blaming his ankle weights. Lassiter notices Mary is gone, but Juliet sees Yin boarding a nearby bus. After failing to stop the bus, Mary appears, claiming to have tried to stop the bus. At Mary's house, Shawn and Gus discover a notebook with several rough drafts of what appears to be Yin's next clue. To Shawn, this confirms his suspicions.

When the police and the Psych duo stake out a location referenced in Yin's rough draft, they see Mary entering the building alone. It appears as if he is preparing for something. Lassiter and Juliet go around the building to catch him, ordering Shawn and Gus to stay in the car. However, they disobey, and enter the building. They find themselves in a studio with surveillance monitors, all covering a staircase. They watch as Mary enters and begins walking up the stairs. They realize that they were wrong about Mary: he is playing the part of Martin Balsam in Psycho. They realize that he is about to be killed. Shawn and Gus try hopelessly to escape the room and save Mary; by the time they find him, he has been stabbed by the real Yin. As he is dying, Mary reveals that he had come alone in an effort to be heroic. Gus notices Yin nearby but he escapes before the police catch him.

Shawn and Gus return to Yang. She tells them to look in her book. Gus protests that he had read the book cover-to-cover. Shawn realizes that the clue might actually be in the cover. He holds the book up to the light as sees a crude drawing of a girl standing near water. Vick calls, and tells them that Yin has left another clue. When they arrive, she tells them that Yin cast each of them as "archetypal characters from Hitchcock's canon." Not even Henry can escape from the deathly casting call, being cast as Sean Connery in Marnie. That night, they arrive at the designated location, where Yin has recreated various sets from Hitchcock films. The five "actors" split up: Henry with Lassiter, Gus with Juliet, and Shawn by himself. Juliet and Gus are lured to a bar, which contains a clue for Juliet. She follows the instructions, but falls through a trapdoor in the floor and is kidnapped. 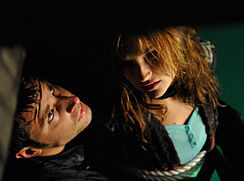 Shawn saves Abigail, who was hidden underneath the pier

At the police station, Shawn blames himself. Lassiter asks Shawn to account for all of his friends and family. Henry is safe, and Shawn's mother, Madeleine, is at a conference in New York, where she is safe. However, Abigail, Shawn's girlfriend, is waiting for him at the airport, arriving back temporarily from a six-month trip to Uganda. McNab is designated to pick her up, as Vick deems it is safest that way. As Abigail (Rachael Leigh Cook) sits in his squad car, he turns his head sideways. He slumps forward, unconscious. Yin sprays her with knockout gas and kidnaps her. Shawn receives a phone call from Yin, who tells him that he must choose who he loves more (Juliet or Abigail), and that there is no way to save them both. 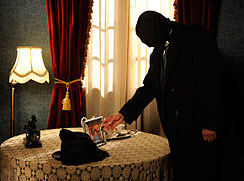 Yin strokes the picture of Shawn and Yang

Juliet is bound, gagged and dangled from a clock tower. Mr. Yin is there and activates the trap and leaves. Gus and Lassiter deduce her location and go to save her with Vick. Shawn figures out that the picture in the book is a clue to Abigail's location. He goes with Henry to the pier to find Abigail. When Shawn arrives, he surprises Yin, who is just leaving. Yin darts away. Shawn finds Abigail tied up under the pier. He and Henry save her with moments to spare. Meanwhile, Gus and Lassiter make their way to the top of the tower to rescue Juliet. Realizing that the line that is holding Juliet up is about to be severed, Gus grabs the blade and holds it back long enough for Lassiter to jam the gears with his gun. Back at the pier, Henry talks to the police while Shawn speaks with Abigail. She tells him that she can no longer date him if that kind of danger follows him around. Meanwhile, Lassiter goes to talk to Juliet, who is getting frustrated with everyone asking if she's okay. Lassiter tells her that "it's okay to not be fine" and Juliet, overcome with the fear that she was very close to being killed, starts sobbing as Lassiter hugs her. Henry scrapes the painted "O" off of the Psych window. Shawn and Gus attend Mary's racquetball-themed funeral. Yang sits in her cell, staring at a wall. In closing, we see Yin, who takes off his hat and sighs. He looks at a picture of Yang, standing next to a young Shawn Spencer.

The episode was well liked by critics, including IGN writer Jonah Krakow, who rated it 9.4 out of 10 and awarded it the IGN.com Editor's Choice Award. He particularly praised the red herrings of the episode, including the filmmakers making the audience momentarily believe that Mary and McNabb could be possible Yins. Krakow in particular made note that the episode managed to stay true to the series formula while offering up a nail-biter of an episode: "...at the same time, I love how they can completely switch gears and offer up a legitimately suspenseful episode and still remain true to the premise of the show."

Krakow also speculated on Juliet's breakdown in the epilogue and its ambiguous nature: "It makes sense that she was scared out of her mind, staring death in the eye and needed a shoulder to cry on (in this case, Det. Lassiter), but part of me thinks knowing that Shawn chose to save Abigail instead of her was another reason why she was so upset. Hopefully we'll get some closure to this relationship in the upcoming season." Krakow finished the review with the following:

Gerald So also praised the episode, but stated that the tone seemed a little too serious compared to the rest of the series. He particularly complimented how the characters worked together to save both Juliet and Abigail in the climax.[2] However, viewership for the episode was down from previous weeks to only 2.95 million viewers.[3]

The episode received an Emmy Award nomination for Outstanding Music Composition For a Series (Original Dramatic Score). The music was composed by Adam Cohen and John Robert Wood.[4]

The entire episode was based upon several themes and iconic scenes from Alfred Hitchcock's canon.

The final installment of the Psych Yin/Yang trilogy, entitled "Yang 3 in 2D", aired on December 22, 2010 as the fifth season finale. The episode follows Shawn and Gus as they, along with Yang (Ally Sheedy) and the rest of the SBPD, attempt to track down and arrest Yin one final time.