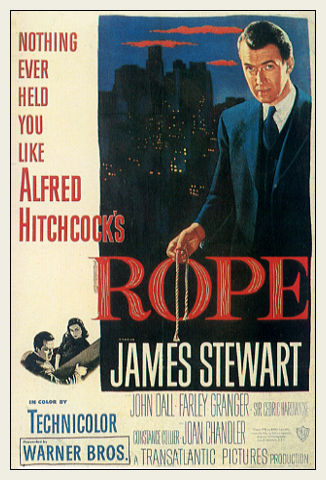 "Rope" (1948) is an classic film notable for its single location, edited so as to appear as a single continuous shot, taking place in real time. It is the first of Hitchcock's films that was made in .

The film was based on the play "Rope" by Patrick Hamilton, which was said to be inspired by the real-life murder of a young boy in 1924 by two students named . Hamilton, though, always denied the link between his play and the case.

Hitchcock was the producer and director of the film. "Rope" is the first movie for which Hitchcock received a credit as both producer and director (he was the uncredited producer on "Number 13", "Suspicion" and "Notorious"). The rights to the film are now owned by , which bought the rights from the Hitchcock estate in 1983. The rights had reverted to the Hitchcock estate from , which at that time held rights to the pre-1948 Warner Bros. films. At present, UA continues to hold the film's copyright.

Brandon's and Phillip's idea for the murder was inspired years earlier by conversations with their erstwhile prep-school housemaster, publisher Rupert Cadell (James Stewart). While at school, Rupert had discussed with them, in an apparently approving way, the intellectual concepts of the and the , a means of showing one's superiority over others.

After committing the murder and hiding the body in a large antique wooden chest, Brandon and Phillip host a dinner party at the Shaw apartment which has a beautiful panoramic view of the city skyline (in what appears to be ). The guests include the victim’s father () and aunt () (his mother is not able to attend), as well as his fiancee, Janet Walker () and her former lover Kenneth Lawrence (), who was once a close friend of David's. The chest containing the body is used as a buffet for the food.

Rupert Cadell also turns up since Brandon in particular feels that he would very likely approve of their so-called work of art. "Now the fun begins," Brandon says when the first of the guests arrives.Brandon subtly drops hints throughout the party about David's absence, beginning a discussion on the art of murder. He manages to appear calm and in control, although when he first speaks to Rupert, he is nervously excited, stammering. Phillip on the other hand is visibly upset and morose. He does not conceal it well and starts to drink too much. When David's aunt, Mrs. Atwater, who fancies herself as a fortune-teller, tells him that his hands will bring him fame, she is talking about his skill at the piano, but he appears to think that it will be a different kind of fame.

Much of the conversation, however, focuses on David and his strange absence, which worries the guests. A suspicious Rupert quizzes a fidgety Phillip about this and about some of the inconsistencies that have been raised in conversation. For example, Phillip had vehemently denied ever strangling a chicken at the Shaws’ farm, but Rupert had personally seen Phillip strangle several.

Phillip later complains to Brandon about having had a "rotten evening", not because of the murder of David but over Rupert's questioning.

Emotions run high. David's father and fiancee are disturbed, wondering why he has neither arrived nor phoned. When his wife calls, overwrought because she has not heard a word from David herself, Mr. Kentley decides to leave. He takes with him some books Brandon has given him, tied together with the very rope Brandon and Phillip used to strangle his son; Brandon's icing on the cake.

About to leave, Rupert is handed another man’s hat by mistake. In it he sees the initials "D.K." (as in David Kentley). Now certain something is wrong, Rupert returns to the apartment a short while after everyone else has departed, pretending that he has absentmindedly left his cigarette case behind. He "plants" the case, asks for a drink and then stays to theorize about the disappearance of David, encouraged by Brandon, who seems eager to have Rupert discover the crime. A tipsy Phillip can't stand it any more, throwing a glass and saying: "Cat and mouse, cat and mouse. But which is the cat and which is the mouse?"

Rupert lifts the lid of the chest and finds the body inside. His two former students have indeed committed murder. He is horrified, but also deeply ashamed since it was his own rhetoric which led them to carry out an actual killing as an intellectual exercise. Rupert seizes Brandon’s gun and fires several shots into the night in order to attract the police.

As the sky outside the apartment darkens into night, we hear the sirens of police cars heading their way.

The film is Hitchcock’s most experimental, abandoning many standard film techniques to allow for the long unbroken scenes. Each shot ran continuously for up to ten minutes without interruption. It was shot on a single set, aside from the opening street scene. Camera moves were planned in advance and there was almost no editing.

The walls of the set were on rollers and could silently be moved out of the way to make way for the camera, and then replaced when they were to come back into shot. Prop men also had to constantly move the furniture and other props out of the way of the large camera, and then ensure they were replaced in the correct location. A team of soundmen and camera operators kept the camera and mics in constant motion, as the actors kept to a carefully choreographed set of cues.

The extraordinary cyclorama in the background was the largest backing ever used on a . It included models of the Empire State and the Chrysler buildings. Numerous chimneys smoke, lights come on in buildings, neon signs light up, and the sunset slowly unfolds as the movie progressed. Within the course of nine reels, the clouds, which were made of spun glass, change position and shape a total of eight times.

Hitchcock filmed each scene in segments lasting up to ten minutes (the length of a reel of film at the time), each segment continuously panning from character to character in real time. Several segments end by panning against or zooming into an object (a man’s jacket, or the back of a piece of furniture, for example) or by having an actor move in front of the camera, blocking the entire screen; each scene after that starts a static shot of that same object. In this way Hitchcock effectively masked many of the cuts in the film, a technique that has frequently been used since to hide edits.

Hitchcock ended up re-shooting the last 4-5 segments because he was dissatisfied with the colour of the sunset. He shot about one segment a day.

Hitchcock used this long-take approach again on his next film, "".

Alfred Hitchcock's cameo is a signature occurrence in most of his films. In this film, Hitchcock is thought by some to make two appearances. [Interview with in the making-of documentary, "Rope Unleashed"] In the opening scene some feel he plays one of the men walking down the street. Later on in the film, Hitchcock’s caricature is on a neon sign visible from the apartment window. Below his caricature is the word "Reduco," recalling Hitch’s cameo in a newspaper ad for "Reduco" in "Lifeboat", made four years before.

Much of the film is based on the idea that one might murder someone just to prove that one could. Some film scholarship has found links between this idea and literature and philosophy. Suggestions have been made that "" and its protagonist form a subtext to the film — whereby the film parallels the idea of murdering just for the sake of performing the act. References to abound throughout the film — particularly to his idea of the superman.

* "R.S.V.P.", a film which borrowed several key elements from "Rope", and in which the film is discussed.