Modified stock car racing, also known as Modified racing or simply Modified, is one of the oldest types of racing in the United States, dating back to the days of the post-World War II coupes. The name for modified racing cars come from the fact that they are not stock but, rather, modified passenger cars. This differentiated them from Stock cars, that were based on production vehicles, in the early history of NASCAR. There are as many different sanctioning bodies for modifieds with each sanctioning body having different body styles and engine sizes.

Vintage racers from Wisconsin. The original NASCAR modifieds looked quite a bit like these cars.

Modified racing began as race drivers modified their cars to gain a competitive advantage over their fellow competitors. What started out as minor modifications to the cars has now grown to the point that some modified classes are no longer based on any current production vehicles. NASCAR was instrumental in modified racing's beginnings. Some of NASCAR's pioneers were veteran modified racers long before NASCAR's inception in 1949. As time progressed, modifieds grew away from "Strictly Stock" or "Stock Cars," and became akin to both stock cars, and open-wheel cars. Today's SuperModifieds have more in common with Indy cars than they do stock cars.

NASCAR Modifieds getting ready for a race at Stafford Springs, CT.

These modifieds are found mostly in the Eastern half of the US. Both of the sanctioning bodies (NASCAR and ASA) listed here use the same rules, but do not race on the same tracks. The cars are easy to identify. These modifieds sit on large slick tires that are exposed on all four corners of the car. The roofs of these cars are more rounded than the other types of modifieds listed in this article, their bodies look somewhat squashed, and have large, 8-inch-high (200 mm), Lexan spoilers on the rear of the cars. The driver sits on the left side of the car, and most of the time will have some type of small plastic windshield in front of him/her. All of these cars will sport small NASCAR or ASA stickers on the doors.

The largest builder of modifieds in the U.S. is former driver Maynard Troyer, who (after retiring in 1982) set up shop and in the 1980s was turning out 100 asphalt modifieds annually.[1]

The NASCAR Whelen Modified series is the only remaining NASCAR series remaining from the sanctioning body's original season in 1948. The original style of NASCAR modifieds actually pre-dates NASCAR's existence by many years.[2] Though it is now known as an asphalt-oval-only series, this was not always the case. The series originally started on dirt, and as more and more asphalt tracks opened, the series migrated to racing on the newer tracks. The series also had previously made forays into road racing with stops at Watkins Glen International in New York.[3] Many NASCAR Sprint Cup drivers have come from this series, including Jimmy Spencer, Geoff Bodine and Steve Park.

Dirt modifieds are probably the most popular type of racing in the US. Almost every dirt sanctioning body has a class of modifieds. Identifying these cars gets a little tricky at times.

The Super DIRTcar Series modifieds are the easiest to identify. The driver sits in the middle of the car, with high-downforce, wind-channeling tunnels on either side of him. The roofs are very flat, and tilted to catch additional air. The front suspension is usually a coil-over setup, with a torsion-bar set-up for the rear suspension. They utilize full tube chassis, which to the untrained eye, looks to be a sprint car chassis, but is much different in reality.

The IMCA-style modifieds are easy to identify as a whole, but distinguishing between the sanctioning bodies is all but impossible. The bodies are very flat on the sides, and lack the downforce generating tunnels the DIRTcar modifies sport. The driver sits on the left side. One of the most notable differences between the IMCA-style modifieds and other modified series cars, is the use of stock production car frame sections as part of the racing chassis. These cars also race on smaller tires than the other types of modifieds, with most sanctioning bodies specifying the same tire. The IMCA Sportmods appear very similar to their brethren, but have distinctly different engines. The Afco KidModz appear the same as the others, but sport full tube chassis, and by rules, have to have Ford 2300 cc inline 4 cylinder engines.

Founded in 1976, the Driver's Independent Race Tracks (DIRT) was acquired by Boundless Racing in June 2004 which had purchased the World of Outlaws in February of that year. In November 2004, Boundless Racing changed its name to DIRT Motorsports. In December of the same year, DIRT Motorsports bought Midwestern sanctioning body UMP.[5] The former DIRT big-block (and small block) modified series has seen many changes in their car designs since the 1970s, but the competition and will to win has remained the same. The ultra-fast, super nimble cars race primarily in the Northeastern US and in Canada, but have had a race added in the Midwest on the 2007 and the 2008 schedules. NASCAR and World of Outlaws Late Model driver Tim McCreadie came from this series, as did World of Outlaws Late Model drivers Tim Fuller and Vic Coffey. All of those drivers still race in the series on a part-time basis, between 10-30 times a year. Notable drivers having competed in DIRT modifieds include Tony Stewart, Andrew Ranger, Dave Blaney, Carl Edwards, JJ Yeley and David Reutimann.[citation needed]

Organized in 1915, the International Motor Contest Association (IMCA) is the oldest racing sanctioning body in the US. IMCA invented the "E-Mod" (or Economy Modified) in 1979.[6] It has become one of the most popular dirt racing classes due to its simple design, light-weight, high power, and ability to adapt to varying track conditions easily. Most IMCA-style classes also boast a "claim rule," wherein a racer may buy a competitors engine for a small amount of money (usually around $500). This rule was intended to keep engine prices from skyrocketing.[7] Sanctioning bodies WISSOTA and United Midwestern Promoters (UMP) also have classes that are almost identical to IMCA's modifieds, with a few small exceptions. The AMRA, or American Motor Racing Association also follows this popular formula for modifieds.[8] NASCAR drivers Ken Schrader and Kenny Wallace own and race UMP Modifieds on off weekends from NASCAR. Some tracks sanction modifieds with IMCA-like specifications, such as Slinger Super Speedway.

This relatively inexpensive (when compared to their "adult" counterparts) racing series is aimed at getting children into racing. It closely follows UMP's Modified rules, with the exception of a few areas. The engine must be a 2300 cc Ford inline 4 cylinder, and the drivers can be no younger than 12, nor older than 18. Some tracks will allow kids 10 or 11 to race, if the track's insurance will allow. The KidModz are also allowed to run tubular chassis, whereas the IMCA/WISSOTA/UMP Modifieds have to have sections of frames from stock production automobiles, with other sections being steel tubing. These cars are offered for sale completely assembled and ready-to-race for under $20,000. The unassembled price is lower.[10]

Found throughout the Midwest, the Great Lakes Outlaw Modifieds (GLOM) are a cross between IMCA Modifieds, and UMP Late Models.[11] These cars have nearly the same hand-made aluminum bodies as their UMP Late Model counterparts (without front fenders), feature tubular chassis, and sport unrestricted engines with aluminum engine blocks and heads. They also are allowed to utilize quick-change rear ends and aluminum wheels, whereas the IMCA modifieds are forced to race with heavier cast-iron engines, partial stock frames, steel wheels and Ford 9-inch (230 mm) rear ends.[12]

One type of Outlaw Modified can be found in the Arkansas, Louisiana, and Texas area. Oddly enough, they are called Ark-La-Tex Winged Modifieds. These outlaw modifieds sport full tube chassis, and bodies that look like the Advanced Auto Parts Super DIRTcar racers, with the exception of the sprint car-like wing affixed to the roofs of the cars.[13]

One type of outlaw modified in Alberta, Canada, races on both dirt and asphalt, with the same cars. Started in the mid 1980s, the Alberta Outlaw Modified Racing Association (AOMRA) races in Alberta, British Columbia, and Saskatchewan. They look like a cross between IMCA modifieds, and old NASCAR modifieds.[14]

Organized in Florida in the 1970s, these Outlaw Modifieds are fairly unique. They are built on tube chassis with coil over shocks. 10-inch-wide (250 mm) tires and a 76-inch (1,900 mm) track make these cars are fast and nimble. 2300 cc, Four cylinder power plants from Fords, Toyotas and even an odd Nissan are common, however the Ford 2300's are the favored motor. Motor rules have stayed very stable over the last 10 years with the only rule change coming in 2008 which allowed the Esslinger aluminum d-port head, due to the declining availability of the cast iron cylinder heads. One thing that sets these cars apart from most modified racing series, is that these cars do not utilize roofs on the cars.[15] 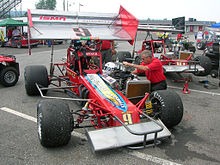 ISMA SuperModified. Note the extreme offset to the driver's side, and the engine mounted outside of the frame rails.
Main article: Supermodified racing

Another type of modified popular in the Southwestern, and Northeastern parts of the US, is the "SuperModified." Super Mods are low-slung, almost body-less modifieds that utilize wings to achieve enough downforce to take turns at extremely high speeds. They also feature engines that are offset to the driver's side, also, to aid in taking turns at high speed. There are 4 sanctioning bodies in the US that sanction supermodified racing. The New York-based International SuperModified Association, or ISMA, is the largest of the four and a true touring series. The Western States Supermodified Racing League (WSSRL) is ISMA's west coast counterpart.[16] The ISMA SuperMods are a bit more technologically advanced, in that the wings attached to the roofs of the cars move. When racing down the straightaways, the wings are almost level. When the car gets to the corners, the back of wing tilts upward, adding downforce to the car.[17]

US Legend Cars International of Charlotte, North Carolina created the Legends series (while they were named 600 Motorsports) as a way of getting more and younger people into racing with affordable cars. The cars were designed to be 5/8-scale 1930s and 1940s coupes and sedans cars raced in the past in the NASCAR Modified Tour. They all feature a tube chassis, and spec 1250 cc Yamaha Motorcycle engines. They are the largest mass producer of race cars in the world.[18]

Dwarf cars are similar to the Legends cars, in that they are scale replicas of vintage race cars. The similarity ends there, as Dwarf cars are true open "modified-style" cars without fenders, and have a 1,250 cc (76 cu in) limitation on the engine size.The Western States Dwarf Car Association, began in 1993, has become one of the most successful racing organizations in history, boasting an average of 80-100 Dwarf Cars at 4 National, and several regional, events a year.[19] There is also a class of Dwarf Cars that race on dirt called the Vintage Lite Series. They race a mixed field of cars that resemble the vintage cars and some that resemble a scaled down version of the current dirt modified (these cars are often referred to as the MiniMods).