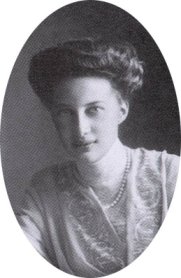 Princess Tatiana Konstantinovna of Russia ("Княжна Татьяна Константиовна") (, &ndash;, ) was the third child and oldest daughter of HIH the by his wife Elisaveta Mavrikievna née HH .

Princess Tatiana (not to be confused with her namesake, Grand Duchess Tatiana Nikolayevna, second daughter of Nicholas II, 1897&ndash;1918) had eight brothers and sisters.

On July 14, 1886 Emperor modified the s by restricting the of grand duke and grand duchess to children and grandchildren in the male line of a Russian . More distant agnatic descendants would henceforth bear the title of prince or princess of the Blood Imperial. Thus, Tatiana, being a great-granddaughter of Nicholas I of the so-called "Konstantinovich" branch of the s was only a from birth, entitled to be addressed as rather than .

In the spring of 1911, Tatiana Konstantinovna became engaged to Prince Konstantin Alexandrovich Bagration-Mukhransky (, , , - , , ), a Georgian by birth who was serving in a s regiment, and died in . She was to be the first daughter of the Romanovs to openly marry a Russian subject or non- prince since the ascended the throne in 1613. Her anxious father approached the Emperor and Empress for approval. On November 30, 1910 he noted in one of his posthumously published journals ("From the Diaries of Grand Duke Konstantin Konstantinovich", Moscow, February 1994), that he received assurances that "they would never look upon her marriage to a Bagration as morganatic, because this House, like the House of Orléans, is descended from a once ruling dynasty."

Previously, the morganatic wives of Romanov grand dukes had been ed from Russia along with their disgraced husbands (for example, Countess Sophia de Torby and Grand Duke Michael Mikhailovich of Russia, or Princess Olga Paley and ). Female Romanovs had only dared marry morganatically in secret, and the couples’ relationships had been kept as open secrets (examples include, Empress and and the second marriage of Grand Duchess Maria Nikolayevna of Russia and Count Grigory Stroganov).

Nonetheless, legallyFact|date=February 2007 Tatiana Konstantinovna's marriage was morganatic. [cite book| others = "emphasis added"| title = Almanach de Gotha| edition = 1944| year = 1944| publisher = | location = Gotha, Germany| language = French| pages = P. 107| quote = Psse "Tatiana-Constantinovna", née à St-Pétersbourg 11 janv. 1890 v.s.; m.: 1. morg. à Pavlosk 24 août 1911 v.s. à Constantin Alexandrovitch pr. Bagration-Moukhransky, † (tué au combat) près de Jarosvavel, arrondt de Lwow, 19 mai 1915 v.s.] It was, in fact, the first marriage in the dynasty conducted in complianceFact|date=February 2007 with the Emperor’s formal decision "not" to accept as dynastic the marriages of even the most junior Romanovs&mdash;those that bore only the title of prince/princess&mdash;with non-royal partners. According to "Always A Grand Duke", the 1933 memoir of Nicholas II’s brother-in-law, Grand Duke Alexander Mikhailovich of Russia (published in New York, by Farrar and Rinehart, Inc.), concern about the eventual marriages of Romanovs so troubled the senior grand dukes that Alexander approached the Emperor about relaxing the requirement that dynasts marry partners "possessing corresponding rank" enshrined in article 188 of the Fundamental Laws (the so-called "Pauline Laws"), but was rebuffed. The grand dukes officially petitioned the Emperor through a commission chaired by , requesting that a new category of dynastic marriages be recognized, to consist of Imperial princes and princesses entitled, with specific Imperial consent, to marry persons of non-royal blood and to transmit to the issue thereof eligibility to inherit the throne. The Emperor’s response was issued formally on June 14, 1911 in the form of a from the Imperial court minister, Baron (Frederiks) (State Archives of the Russian Federation, Series 601, {"The Emperor Nicholas II"}, Inventory {register} 1, File 2143, pages 58-59):

As promised in this communiqué, the Emperor proceeded to legalize "authorized" marriages of imperial Romanovs below grand ducal rank to persons who lacked "corresponding rank". Such marriages had been altogether banned, rather than deemed morganatic, by Alexander III’s "ukase" #5868 on March 23, 1889. But "ukase" #35731/1489, issued on August 11, 1911, amended the 1889 ban with the words, "Henceforth no grand duke or grand duchess may contract a marriage with a person not possessing corresponding rank, that is, not belonging to a Royal or Ruling house."

Both the 1889 and 1911 decrees were addenda to article 188 of the Pauline laws (re-codified as article 63 of the Imperial Family Statute). Left intact, however, was that original statute: "A person of the Imperial family who has entered into a marriage alliance with a person not possessing corresponding rank, that is, not belonging to a Royal or Ruling House, cannot pass on to that person, or to any posterity that may issue from such a marriage, the rights which belong to the Members of the Imperial family."

Also remaining unrepealed was article 36 ("Children born of a marriage between a member of the Imperial Family and a person not of corresponding rank, that is, not belonging to a Royal or Ruling House, shall have no right of succession to the Throne"). Aside from article 188, article 36 applied to prevent Tatiana Konstantinovna'sFact|date=February 2007 issue from claiming succession rights.

Her contemplated marriage having been rendered legal, Tatiana Konstantinovna renounced her dynastic rights, as required. Nicholas II acknowledged this in a "ukase" addressed to the Imperial Senate on February 9, 1914 (Collection of Statutes and Decrees of the Government, 1914, #441): "Her Highness the Princess Tatiana Konstantinovna has presented to Us over Her own sign manual, a renunciation of the right to succession to the Imperial Throne of belonging to Her as a member of the Imperial House," receiving in return Nicholas II’s authorization to marry Bagration-Mukhransky.

Finally, Tatiana Konstantinovna and her Georgian prince were married, at her father's estate at , on September 3, 1911. The Emperor was present at the wedding and, according to a family tradition subsequently repeated by the bride’s son, Nicholas II is reported to have suggested that the bridegroom sign the wedding register as "Prince " (i.e. "Prince of Georgia"), perhaps a courteous acknowledgement of the fact that, although for the preceding century the Bagrations might only rank as nobles who bore the fairly common title of "" (prince) in Russia, historically the Mukhranskys were a branch of a deposed royal dynasty that had ruled on both sides of the for hundreds of years longer than the Romanovs. By changing the law, granting unprecedentedFact|date=February 2007 permission for the marriage, and personally attending it, Nicholas II was not, in fact, treating this marriage as an act of rebellion, nor as a disgrace to the Romanovs. Yet his acceptance was conditioned upon the marriage being deemed legally morganaticFact|date=February 2007, reflecting the non-dynastic status that the Bagration-Mukhranskys held in Russia in 1911.

After the outbreak of , Konstantin enlisted in Russia’s armed forces, and was killed in action in 1915. Her brother Oleg was wounded in action, and subsequently died on at Vitebsk Hospital in . Three other brothers, Ioann, Konstantin and Igor, were murdered by Bolsheviks in 1918.

Tatiana Konstantinovna is reported to have become especially close to her uncle, during her widowhood. After the , she stayed with him in his palace, where she fell in love with his , Alexander Korochenzov ( - ). Urged by her uncle, she left Russia with Korochenzov and her young children. They were fortunate enough to escape, as Dmitri Konstantinovich was executed in in January 1919.

Tatiana Konstantinovna and Korochenzov at first fled to and later to . In November 1921, they married in . Not quite three years later, however, Tatiana became a widow for the second time when Alexander died in . Tatiana raised her children alone, and, after both were grown and married, she took the veil. She died as Mother Tamara (named so after the medieval Georgian queen Tamar, a remote ancestor of Tatiana’s husband) [ru icon Пчелов, Евгений Владимирович (Pchyolov, Evgeny Vladimirovich) (2003), Монархи России ("Monarchs of Russia"), p. 620. Olma Media Group, ISBN 5224043433.] , of the Convent on in .

In post-monarchy debates over which has the strongest claim to Russia’s throne under the dynastic laws, the marriage of Tatiana Konstantinovna is often cited in support of rival claimants. Some cite it as evidence that marriage to a member of the Bagration family cannot be considered any more "equal" than marriage to any other of Russia’s , since the marriage was morganaticFact|date=February 2007 and she was only able to obtain the Emperor’s approval by first renouncing her succession rights. According to this argument, Maria Vladimirovna Romanov and her son, George Mikhailovich, cannot be rightful claimants to the throne because Maria Vladimirovna’s mother is Princess Leonida Bagration-Mukhransky, belonging to the same family previously permitted to inter-marry with the Romanovs on morganatic termsFact|date=February 2007. An oft-heard rebuttal isFact|date=February 2007 that the Bagrations fall into the same "grey area" as the 1856 marriage of Grand Duchess Maria Nikolayevna to Duke Maximilian of Leuchtenberg, who was notFact|date=February 2007 a member of a "royal or ruling family", despite his historical dynastic connections, yet Emperor Nicholas I exercised Imperial authority to rule in favor of Duke Maximilien’s dynasticity for marital purposes.

Other monarchists argue that the circumstances of Tatiana Konstantinovna’s marriage confirm Maria Vladimirovna’s claim on two counts. First, they maintainFact|date=February 2007 that Nicholas II’s acceptance of Tatiana Konstantinovna’s renunciation prior to marriage explicitly confirms that she had succession rights despite being born of a mother who never converted to the , sometimes alleged to be a prerequisite for successors to Russia’s throne. A rebuttal is that article 185 of the Pauline laws is explicit: "The marriage of a male member of the Imperial House who might succeed to the Throne to a person of another faith may not take place until she embraces Orthodoxy."

The second relevant claim in support of Maria Vladimirovna is that Tatiana Konstantinovna’s mandated renunciation proves that Romanov princes were required to marry "equally" in order to transmit succession rights to their descendantsFact|date=February 2007, an interpretation denied by Nicholas Romanovich Romanoff, president of the Romanoff Family Association, in an interview with the royalty magazine, "Point de Vue", published February 14, 1991, who stated, "Let’s take the example of the Princess Tatiana who, in 1911, married a prince of a very great family of Georgia, but which was not reigning. Before giving his authorization, Czar Nicholas requested that the princess renounce her rights of succession in advance. That argument is very important since, although her mother was Lutheran, the princess only renounced upon her marriage, whereas there was a law stating that children born of a non-Orthodox marriage had no right to succeed as czar. Nonetheless, Nicholas II requested her renunciation."

The counter-claim has been that the wording of the August 1911 "ukase" restricting the ban on morganatic marriages to grand dukes was silent on imperial princes, therefore the Frederiks memorandum was not given full legal effectFact|date=February 2007.