The golden hamster or Syrian hamster, Mesocricetus auratus, is a very well known member of the rodent subfamily Cricetinae, the hamsters. In the wild they are now considered vulnerable. Their numbers have been in decline due to loss of habitat (caused by agriculture) and deliberate destruction by humans.[1] However, they are popular as pets and scientific research animals. Adults grow from 5 to 7 inches (13 to 18 cm) in length, and have an average lifespan of 1000 days or 2 to 3 years.[2] The golden hamster is a crepuscular animal. Hamsters sleep during the day in the deepest part of their burrow to avoid predators. They tend to wake up just after sunset, late at night and at dawn, which leads some to falsely describe them as nocturnal. 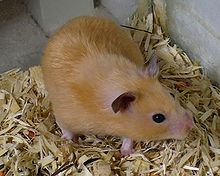 Like most members of the subfamily, the golden hamster has expandable cheek pouches, which extend from its cheeks to its shoulders. In the wild, hamsters are larder hoarders; they use their cheek pouches to transport food to their burrows. Their name in the local Arabic dialect where they were found translates to "mister saddlebags" (Arabic: أبو جراب) due to the amount of storage space in their cheek pouches.[citation needed] If food is plentiful, they store it in large amounts—it has been reported that 25 kilograms (55 lb) of grain was found in the burrow of a single hamster.[citation needed] 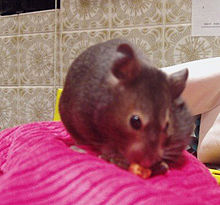 Sexually mature female hamsters come into season (oestrus) every four days. Golden hamsters have the shortest gestation period in any known placental mammal at only 16 days. Gestation has been known to last up to 18 days but this is rare and almost always includes complications. They can produce large litters of 20 or more young, although the average litter size is between 8 to 10 pups. If a mother hamster is inexperienced or feels threatened, she may abandon or even eat her pups. A female hamster will come into season almost immediately after giving birth, and can become pregnant despite already having a litter. This puts a lot of stress on the mother's body and often results in very weak and undernourished young.

A mother with her two babies, which are less than 1 week old.

Hamsters are very territorial and may attack others. Exceptions do occur, usually when a female and male come together when the female is in heat, and even so the female may attack the male after mating. Even brothers and sisters, once mature, may attack one another. In captivity, babies are separated from their mother and by gender after 4 weeks as they sexually mature at 4–5 weeks old. Same sex groups of siblings can stay with each other until they're approximately 8 weeks old, at which point they will begin to become territorial and will fight with each other, sometimes to the death. Infanticide is not uncommon with female golden hamsters. They will eat their dead young in the wild to prevent predators detecting them. Some females, however, have been known to kill and eat healthy young, usually as a result of the pups interacting with humans as any foreign scent is treated as a threat.

Golden hamsters mark their burrow with secretions from special scent glands on their hips. Male hamsters in particular lick their body near the glands, creating damp spots on the fur, then drag their sides along objects to mark their territory. Females will often use bodily secretions and feces. The female and the male can have scent glands in different places. The female's is on the hip, and the male's can sometimes be found around the stomach area.

Golden hamsters originate from Syria and were found in 1839 by British zoologist George Robert Waterhouse. Their natural condition is a dry, hot desert climate. The widespread notion that the name 'Hamster' derives from the German for 'hoarding (food)' is wrong: rather, the German verb hamstern derives from the name of the animal, owing to their respective behavior. 'Hamster' probably derives from the proto-slavic chomẽstar (compare also with Russian 'хомячок', 'hohmyachok' or Polish 'chomik').[3]

Waterhouse's original specimen was a female hamster—he named it Cricetus auratus or the "golden hamster". The skin of the specimen is kept at the British Museum of Natural History.[4]

In 1930, Israel Aharoni, a zoologist and professor at the Hebrew University of Jerusalem, captured a mother hamster and her litter of pups in Aleppo, Syria. The hamsters were bred in Jerusalem as laboratory animals. Some escaped from the cage through a hole in the floor, and most of the wild golden hamsters in Israel today are believed to be descended from this litter.[4]

Descendants of the captive hamsters were shipped to Britain in 1931, where they came under the care of the Wellcome Bureau of Scientific Research. They bred well and two more pair were given to the Zoological Society of London in 1932. The descendants of these were passed on to private breeders in 1937. A separate stock of hamsters was exported from Syria to the USA in 1971, but it appears that none of today's North American pets are descended from these (at least in the female line), because recent mitochondrial DNA studies have established that all domestic golden hamsters are descended from one female – probably the one captured in 1930 in Syria.[4]

Since the species was named, the genus Cricetus has been subdivided and this species (together with several others) was separated into the genus Mesocricetus, leading to the currently accepted scientific name for the golden hamster of Mesocricetus auratus.[6][Full citation needed]

Surviving in the wild

Following Professor Aharoni's collection in 1930, only infrequent sightings and captures were reported in the wild. Finally, to confirm the current existence of the wild golden hamster in northern Syria and southern Turkey, two expeditions were carried out during September 1997 and March 1999. The researchers found and mapped 30 burrows. None of the inhabited burrows contained more than one adult. The team caught six females and seven males. One female was pregnant and gave birth to six pups. All these 19 caught golden hamsters, together with three wild individuals from the University of Aleppo, were shipped to Germany to form a new breeding stock.[5]

Observations of females in this wild population have revealed that contrary to laboratory populations, activity patterns are crepuscular rather than nocturnal, possibly to avoid nocturnal predators such as owls.[6]

In captivity, golden hamsters follow well defined daily routines of wheel-running activity, which has made them popular subjects in circadian rhythms research. They have a number of fixed action patterns that are readily observed, including scent-marking and body grooming, which is of interest in ethology (the study of animal behaviour).

But by far the greatest use of hamsters is in biomedical research. Among other things, because captive golden hamsters are highly inbred (being descended from only a few captured individuals) they have a high incidence of a genetic heart condition causing dilated cardiomyopathy. Several inbred strains of hamsters have been developed as animal models for human forms of dilated cardiomyopathy. The gene responsible for hamster cardiomyopathy in a widely studied inbred hamster strain, BIO14.6, has been identified as being delta-sarcoglycan.[8] Pet hamsters are also potentially prone to cardiomyopathy, which is a not infrequent cause of unexpected sudden death in adolescent or young adult hamsters.

Scientific studies of animal welfare concerning captive golden hamsters have shown that they prefer to use running wheels of large diameters (35 cm diameter was preferred over 23 cm), and that they prefer bedding material which allows them to build nests, if nesting material is not already available.[9]

The golden hamster can contract contagious reticulum cell sarcoma[10] which can be transmitted from one golden hamster to another by means of the bite of the mosquito Aedes aegypti.[11]

Golden hamsters are popular as house pets due to their docile, inquisitive nature and small size. However, these animals have some special requirements that must be met in order for them to be happy and healthy. Although some people mistakenly think of them as a pet for young children, the American Society for the Prevention of Cruelty to Animals recommends hamsters as pets only for people 10 years or older and the child should be supervised by an adult.[citation needed]

Most hamsters in American and British pet stores are golden hamsters. Originally, golden hamsters came in just one color — the mixture of brown, black, and gold which gave them their "golden" name — but they have since developed a myriad of color and pattern mutations such as cream, white, blonde, cinnamon, tortoiseshell, black, three different shades of gray, dominant spot, banded and dilute, just to name a few. The Humane Society of the United States states there is no such thing as a habitat that is too big for a hamster. The hamster will spend the majority of its time in the cage, so it should be as big as possible, safe, comfortable and interesting. Golden hamsters are energetic and need space to exercise.[citation needed]

"Angora" hamsters are commonly known as "Teddy Bear" hamsters. Female Teddy Bear hamsters have short, velvety fur that comes in many different colors. Male teddy bear hamsters usually have much longer fur than the female variety, culminating in a "skirt" of longer fur around their backsides.

Black Bears are a recent off-shoot of teddy bear hamsters (mutation discovered in 1985), the major difference being their black-colored fur. It can be argued[who?] that black bears are just black teddy bears rather than their own breed; on the other hand, black bears were originally selectively bred for their larger size and more docile nature as well as their color. However, in current stock, this is no longer the case.[citation needed]