Martin Johansson (born September 26, 1984) is a Swedish orienteering and ski-orienteering competitor, medallist from the orienteering world championships, and a 2004 Junior World Champion in relay. He received bronze medals in sprint at the World Orienteering Championships in Kiev in 2007 and in Olomouc in 2008.[1][2]

Johansson was born on September 26, 1984 in Avesta, a locality of 15,000 people in Dalarna province of Sweden. He had broken a clavicle at birth, a minor defect which he still carries. Johansson participated in various sports as a child, including hockey, track and field athletics, skiing and table tennis. Hockey was his favorite sport, but as he was small and skinny (just over 50 kg at the age of 16), he had to abandon it at the age of 13-14. He switched to skiing in winter and running in summer, combining both with orienteering and training in the club IFK Mora. Extensive training gradually his built muscles and success in local competitions, both in ski and foot orienteering.[3] Overtraining put him out of competitions for 6 month before the 2004 season. However, he recovered and won silver in ski relay in Vuokatti 2004 Junior World Orienteering Championship, as well as gold in relay and silver in long distance at the Gdansk 2004 Junior World foot Orienteering Championship.[2] 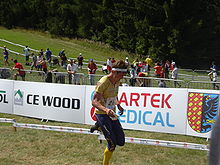 In 2005, Johansson debuted in adult competitions. Although he was a Swedish champion in sprint, he was not included into the Swedish team for the 2005 World Orienteering Championship (WOC), however he was competing for the team in other events. At the Kiev 2007 WOC he had collapsed on the long distance run, but amazingly recovered to win bronze medal in the sprint just a few days after that. Before the next WOC in Olomouc, 2008 he had a serious toe injury, but recovered and again won a bronze medal in sprint.[2]

His injuries did not stop and the most serious one came during the 2009 WOC in Miskolc, Hungary. He finished 5th in sprint and his next discipline was relay on August 21. The Swedish team was battling for the victory with France and Norway, and each team put the strongest runner on the last leg. French Thierry Gueorgiou was a favorite and was leading the race, but made an orienting mistake and fell behind Johansson. At the end of the race, Johansson got injured in an event witnessed by nobody, including Johansson himself. He described it as he was running downhill and suddenly something hit him in a quadriceps. He made a few steps, but had to stop and found a big tree branch sticking out of his leg. He fell and panicked anticipating a splash of blood, but saw Gueorgiou coming and yelled for help. Gueorgiou stopped and was soon joined by Norwegian Anders Nordberg and Czech Michal Smola. Johansson told them to keep running, but they refused and started working as a team. Nordberg ran to the finish line for help, whereas Gueorgiou and Smola removed the branch, which pierced the leg to a 12-cm depth,[4] and harnessed the wound using Gueorgiou's shirt and the straps of his GPS device. Then they carried Johansson, who passed out several times in the meantime, to the road where an ambulance car was waiting.[5][6][7] After Johansson was on his way to the hospital, Smola, Gueorgiou and Nordberg continued the course. They jogged together finishing at 25th, 26th, and 27th places. 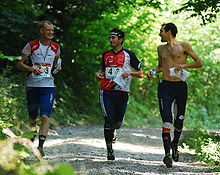 Nordberg, Smola, and Gueorgiou finishing the race after aiding Johansson; Gueorgiou has the stick in his pocket

All of this was witnessed by spectators worldwide who were following the men's relay race, via GPS tracking shown live on the Internet.[8] Foot orienteering races are cross-country, off-rail races and the preferred route choice often is through forests. Thus spectators have limited access on course. Spectators who were watching a map of the race in progress witnessed the strange behavior of the four leaders' GPS tracks – the tracks stopped. Soon Nordberg’s track started moving again, but it went to the road and then to the finish area.[9] Viewer-controlled replays of the race are available for analysis, in a RouteGadget web tool.[8]

Interpretation of International Orienteering Federation (IOF) competition rules was at issue: rule 26.13 states "The organiser must void a competition if at any point it becomes clear that circumstances have arisen which make the competition unfair or dangerous for the competitors. After much deliberation on whether or not to void the relay, the organizers declared that it stood.[10][11] IOF president Åke Jacobson told Gueorgiou, Nordberg and Smola "What you did today is a great example of extreme sportsmanship and fair play. You are an inspiration for all of us!"[10] As an orienteering relay team has 3 runners, orienteers have dubbed Gueorgiou, Nordberg and Smola "Team Fairplay".[12][13]

Johansson underwent an operation to clean the infection in his wound. The operation went successfully and already on August 26, 2009 he returned home, praising Hungarian doctors.[5]

At the Junior World Ski Orienteering Championships in Vuokatti, Finland in 2004, apart from the silver in relay, Johansson also finished 5th in the long distance and 6th in the short distance disciplines. As a strong cross-country skier, he participated in the 2006 Vasaloppet – a 90-km race held annually in northwestern Dalarna, Sweden, the oldest and one of the biggest cross-country ski marathon in the world. He was in the front group, but finished around 50th place. He also represented Sweden at the cross-country skiing World Championship in 2007.[2]

As of August 28, 2009, Johansson was placed 7th at the World foot-orienteering ranking qualification. His best results were achieved at the World Cups – two bronze medals in sprint and long run in 2007 and a gold medal the long run in Oslo 2009. His best WOC results are two bronze medals in sprint, and his best WOC achievements in other disciplines are more modest – 9th in the long run and 8th in relay, both in Olomouc 2008. He did not compete in the WOC middle run. Johansson participated in the European Orienteering Championship (foot) in Ventspils Latvia (2008) and was 5th in the long distance, 12th in sprint and 6th in relay. When free from sport, Johansson is studying construction engineering. He has two sisters and one brother.[2]