The Martel is an Anglo-French anti-radiation missile (ARM). The name Martel is a contraction of Missile, Anti-Radiation, Television, referring to the guidance options. There are two variants, the passive radar guided (AS 37) and the video guided (AJ 168). 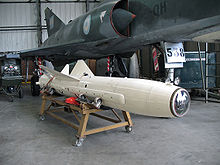 Martel AJ 168 TV-guided missile display round
Although displayed alongside a Mirage, the Mirage only carried the AS.37

The aircraft that used these missiles were the Blackburn Buccaneer (up to three TV or four ARM variant), the SEPECAT Jaguar (two) and the Mirage III/F1 (one or two). The task of the Martel was quite oriented to anti-ship attacks with its long range and heavy warhead. There was not, at the time, a small radar homing missile like the AGM-84 Harpoon with an active radar, so the only viable solution was a TV or ARM sensor. With a relatively long range, a heavy payload, and a subsonic speed, this missile compares more to an anti-ship weapon like the Exocet or the AS.34 Kormoran than an anti-radar missile. It weighs three times as much as the AGM-45 Shrike, with half the speed but much greater range and explosive power.

It was possible to adapt the Martel ARM to be used against different wavelength radars. It was an improvement compared to the early Standard ARM missiles, that had only one narrow-band homing sensor. But the ARM sensor was only selectable on the ground, not in flight and so before taking-off it was necessary to know what kind of radar should be attacked.

The UK has used both types, the French only the radar-equipped variant. The Martel fuselage forms the basis for the Sea Eagle anti-ship missile with a turbojet to improve range, while the French used it to develop ARMAT, an advanced ARM missile in the '80s[1]. For ARM functions, the RAF adopted a totally new missile, much smaller, the ALARM.

The Martel was probably used by the Iraqi army against Iran, and was used by France against Libya during the Epervier military operation, supporting Chad. On January 7, 1987 four French Jaguars took off carrying one Martel each. Three failed to launch their missiles for technical reasons, but the last one hit an SA-6 radar, destroying it completely[2].