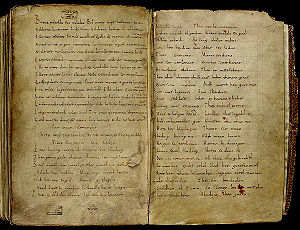 The Manifesto for Walloon Culture (Manifeste pour la culture wallonne), was published in Liège on 15 September 1983 and signed ‘by seventy-five key figures in artistic, journalistic and university circles’[2] of Wallonia.

For years, Francophone Belgian elites defended the principle that there wre no difference between French culture in Belgium and in France. Confronted with a unified Flemish community, the idea of a unified French culture, still referring to the big partner in the south thouh stressing the Belgian context now, had to be valid for both Walloons and Francophone Bruxellois, so excluding a separate Walloon culture. [4]. On the political plan, the Belgian Constitution revised in 1971 was a compromise between federalism with two (Flanders-Wallonia) and federalism with three (Flanders-Wallonia-Brussels). The former was more a response to the Flemings' wishes (two major cultural communities); the latter corresponded more to the Walloons' wishes (three economic regions). Flemings would rapidly merge the two institutions, Community and Region. It was easier for them because there are more or less two hundred thousand Flemings in Brussels in front of six million Flemings in Flanders. But there are almost one million French-speaking inhabitants in Brussels in front of only 3,5 million Walloons.

Such bicephalous institutions (Community and Region), which should contribute to the construction of Wallonia, in fact do it ill service. The territories and interests of these two institutions do not entirely overlap and their interests are not always convergent. To undertake an economic recovery, the Walloon region can neither use cultural leverage nor count on symbolic capital. Its institutional duality is not suited to clarify the symbolic landscape of a Wallonia suffering from a failure to understand itself. In 1983 and 2003, two Walloon Manifestos put their finger on the problem... unsuccessfully, for the French Community of Belgium benefits from the support of the French-speaking Belgian cultural establishment.
—[5]

The Flemish Journalist Guido Fonteyn described it as a Walloon awakening [6].

For Dimitrios Karmis and Alain Gagnon, on the road to cultural self-assertion this manifesto has marked a powerful moment[7].

For Emmanuelle Labeau, the Arthur Masson's novels before the period of the Manifesto (Masson died in 1970), are located in Wallonia,

not only a provincial region, it is also a different country from one that possesses linguistic legitimacy : France. It is worth noting that a positive image -relying on affective and non linguistic qualities – is given of this peripheral region. On the other hand, the novels are intended to obtain literary recognition by exploiting the exoticism of this milieu [...] In his writings, Masson manages to convey the ambivalent attitude of educated Francophone Belgium: regional varieties of French are felt to have positive affective features but lack sophistication. By dividing his writings between two areas – his character's language which unshamefully uses regional features and his own language, which aims at neutrality – Masson tried to resolve the tensions of a national linguistic inferiority complex.
—[8]

The regional varieties of French are not necessarily the Walloon dialect but Philip Mosley wrote:

Walloon dialect has carried neither official status as a language in administrative, ecclesiastical, or political affairs, nor sufficient weight to act as a popular and influential vehicle for the expression of Walloon cultural identity. This latter task has fallend instead in the last thirty years to politically conscious writers in French who published for instance a Manifesto for Walloon culture
—[9]

This Manifesto was violently criticized in Brussels:

In Brussels, despite the federalization process the unitary vision historically characteristic of the Franco-Bruxellois still seems to have some hold. In the eyes of many Franco-Bruxellois, the country is far from the picture proposed by the Manifeste pour la culture wallonne. Home of the EU Commission, Capital of Belgium and bastion of pan-Belgian nationalism since 1830, Brussels tends to be contemptuous of Walloon and Flemish identities, which are considered too particularistic in the context of the European integration. Brussels pan-Belgian nationalism has professed moral superiority and has often conceivend itself as the path toward a more universal belonging, in a perspective similar to Trudeau's vision...
—[10]

Successful or not? Now, sympathy from Brussels

According Michael Keating, John Loughlin, Kris Deschouwer in 2003: The "single French culture" is still the official discourse, and is defended by the French community authorities (...) The Walloon movement of today, supported by a small number of intellectual elites, defends very much the typical Walloon difference, but has not been able to moblise for it. [11]

In December 2006, a Brussels manifesto was published partly in the same spirit as the Walloon manifesto, claiming a regionalisation (in favour of Brussels as well in favour of Wallonia), of the French Community [12]. It was also signed by key figures of Brussels as for instance the philosophers Philippe van Parijs and Jean-Marc Ferry, so that the Brussels manifesto has given the Walloon “regionalists" an opportunity to remind everyone that they have been calling for an end to the French-speaking Community and the transfer of its powers, especially its responsibilities for education and culture, to the Walloon Region since their 1983 "Manifesto for Walloon culture" [13]

Although the cultural aspect was already present in the “renardisme”, it was with the Manifeste pour la culture wallonne that culture truly became a priority within the Walloon culture. Conversely, some defenders of the French-speaking community have supported the idea of a fusion between the Walloon Region and the French-speaking Community. It’s the argument of the “French-speaking Nation” defended at the time by the president of the PRL, Jean Gol, and others who blamed the regionalists of “falling back on" a Walloon identity. Recently a Brussels regionalism has arisen, in particular through the association “Manifesto” which advocates the development of educational and cultural policies adapted to the needs of the Brussels Region. The Walloon and Brussels regionalists privilege an institutional system based on three Regions with equal levels of autonomy and power. The Flemish movement has always preferred a system composed of two main regions, Flanders and Wallonia, for the joint rule of the Brussels Region.
—[14]

The conclusion of the Manifesto for Wallon culture was: All those who live and work in the Walloon region are undeniably part of Wallonia. All respectable human ideas and beliefs are also part of Wallonia (...) Being a straightforward community of human beings, Wallonia wishes to emerge as an appropriate entity which opens itself to the entire world. [15]

The Walloon Minister President started a debate about the Walloon identity on 1 March 2010 in the newspaper La Meuse. He will make the proposal to his government to rename 'Walloon Region' as 'Wallonia'. The director of the Institut Destrée commented this initiative the day after on the RTBF. He linked this initiative and the Manifesto for Walloon culture together:

Everybody who is an inhabitant of Wallonia is a Walloon and that's the spirit of the Manifesto for Walloon Culture of 1983. That's the great difference between the debate in France about the national identity and our debate.
—[16]

Le Figaro (4 March 2010) reminds the last sentences of the Manifesto for Walloon Culture : 'All those who live and work in the Walloon region are undeniably part of Wallonia.' These sentences are hopefully a reason to hope a peaceful debate...' [17]

Criticism about this new debate appears both in Wallonia and Brussels. But perhaps mainly in the Brussels' Newspapers. For instance Pascal Lorent in Le Soir 4 March 2010 writes: 'The Walloon identity doesn't exist'. And Pierre Bouillon wrote in Le Soir 6 March 2010 that the Walloon identity refers mainly to tourism, unemployment and bribery in Charleroi.[18] It seems that the dispute between Brussels and Wallonia about this issue remains as for instance Europe since 1945: an encyclopedia, Tome I wrote it for some years: 'A Walloon identity is also emerging that exhibits at the political level the still mainly hidden tension between French-speaking Brussels and Wallonia' [19] On the contrary, it seems to Paul Piret, journalist at La Libre Belgique, a debate on the concept 'Identity' is good about political citizenship, roots, collective project and even pride.[20]