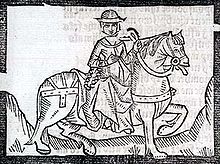 The Man of Law (or lawyer) from The Canterbury Tales

The Man of Law's Tale (also called The Lawyer's Tale) is the fifth of the Canterbury Tales by Geoffrey Chaucer, written around 1387.

The Man of Law, also known as The Sergeant at Law, tells a Romance tale of a Christian princess named Custance (the modern form would be Constance) who is betrothed to the Syrian Sultan on condition that he convert to Christianity. The Sultan's mother connives to prevent this and has Constance set adrift on the sea. Her adventures and trials continue after she is shipwrecked on the Northumberland coast.

Northumberland is a pagan country where the King, Alla (based on Chaucer's understanding of the historical Ælla of Northumbria) eventually converted to Christianity. Alla's evil mother intercepts and falsifies a letter between the couple, which results in Constance's being banished. Constance is forced to go to sea again and is found by a Senator of Rome. The Senator takes Constance (and her child) back to Italy to serve as a household servant. King Alla, still heartbroken over the loss of Constance, goes to Rome on a pilgrimage, and fortunately finds Constance. In the end the couple return to Northumberland. Alla dies a year later, and the baby boy becomes the King.

The tale is based on a story within the Chronicles of Nicholas Trivet but the major theme in the tale, of an exiled princess uncorrupted by her suffering, was common in the literature of the time.[1] Her tale is also told in John Gower's Confessio Amantis, and both are similar to the verse Romance Emaré, and the cycle is generally known as the "Constance" cycle.[1] The oldest known variant of this particular type is Vitae duorum Offarum.[2] More distantly related forms of the persecuted heroine include Le Bone Florence of Rome, and Griselda.[3]

An incident where Constance is framed for murder by a bloody dagger appears to be a direct borrowing from Crescentia.[4]

The tale is meant as a morally uplifting story and is similar to hagiography, or stories of the saints' lives, which were common popular literature of the time. Custance, as her name suggests, is constant to her Christian religion despite the attacks and testing it receives from the pagans and heathens she meets on her travels.

The Man of Law tells his story in a pompous over-blown style as if he is defending Custance in a court of law. He also uses many rhetorical figures, taken straight from the manuals of rhetoric of the day, to emphasize Custance's noble character—as well as the teller's lawyerly skills—and state her case.

Although Chaucer receives some praise and also criticism from his own character with favourable mentions of The Book of the Duchess and The Legend of Good Women; in the Man of Law's prologue he seems to spare most of his opprobrium for John Gower.[original research?] Two of the tales which he dislikes, Canace and Apollonius of Tyre, involve incest, as did the some versions of the story. Chaucer based this tale on the Nicholas Trivet story from his Chronicle. Gower though had recorded all these stories. Chaucer is, perhaps, with friendly banter, trying to goad his friend and fellow writer into a storytelling challenge.

But certeinly no word ne writeth he
Of thilke wikke [wicked] ensample of Canacee,
That loved hir owene brother synfully --
Of swiche cursed stories I sey fy! --
Or ellis of Tyro Appollonius,
How that the cursed kyng Antiochus
Birafte his doghter of hir maydenhede,
That is so horrible a tale for to rede,
Whan he hir threw upon the pavement.

Sequence with other tales

The various manuscripts of the tales differ on the structure of the tales with some containing the Man of Law's epilogue and others not. In the epilogue, the host invites the Parson but he is interrupted before he can begin and a different speaker tells the next tale. The Summoner, the Squire and the Shipman are listed as interrupters in the different manuscripts but it is the Shipman whose character best matches the rude remarks although the mention of his "joly body" sounds closer to something the wife of Bath may say. What it probably shows is that Chaucer had not fixed his overall plan. There are also hints, with his claim he will talk in prose despite rhyming throughout, that the Man of Law originally told the Tale of Melibee before he was assigned Custance's tale late in the composition of the tales.