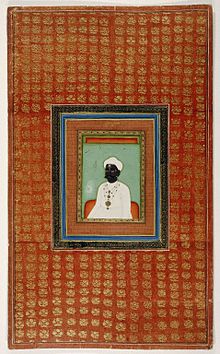 Mahadaji Shinde (1730–February 12, 1794) (Marathi: महादजी शिंदे), was a Maratha ruler of the state of Gwalior in central India. Mahadaji was instrumental in resurrecting Maratha power after the debacle of the Third Battle of Panipat in 1761, and rose to become a trusted lieutenant of the Peshwa, leader of the Maratha Confederacy, as well as the Mughal emperor Shah Alam II. During his reign, Gwalior became the leading state in the Maratha Confederacy and one of the foremost military powers in India.

Ranoji Shinde was the son of Jankojirao Shinde, the Patil of Kanherkhed in Maharashtra. Ranoji was put in charge of the Maratha armies in Malwa by the Peshwa. He conquered much of Malwa from the Mughal Empire, and fixed his headquarters in the ancient city of Ujjain, which ultimately became the capital of the Shinde dominion, which was known after its later capital of Gwalior. Ranoji died in 1745 and left three legitimate sons, Jayapa, Dattaji, and Jotiba, and two illegitimate, Tukaji and Mahadji. He was succeeded by Jayappa Shinde who expanded their territories up to the River Yamuna.

Mahadji's mother was a Rajput woman named Chimabai. From an early age, he was given a thorough military education. He first went to war at the age of 10.

In 1740, the Marathas were successful in defeating the Nizam of Hyderabad. Mahadji (who was then aged 10) accompanied Dattajirao Shinde and Trimbak Kinnad on this campaign.

In 1742, the Marathas were attacked by the Nizam of Hyderabad at Berar and Belur. Mahadji accompanied the forces sent by Peshwa Balaji Baji Rao who drove away the invaders.

The army of Malharrao Holkar joined the Shinde army to bring all the Rajput states under Maratha control and force them to accept Maratha suzerainty, as directed by the Peshwa. Under this campaign, several city states were added to the Maratha Empire such as Medtya, Ratangarh, Lalgarh, Bikaner, Laswari, Lachhmangarh, Kumher and Deeg and the states with territory of Jaipur and Jodhpur agreed to become vassals of the Maratha Empire. All the Jat states except Bharatpur and Vijaynagar too were conquered.

Mathura which was under Mughal rule was conquered by Mahadji in 1755 where he reconstructed various old temples and established a centre for Sanskrit learning. In January 1758, Mahadji established Gwalior as his headquarters.

Jayappa Shinde, the head of the Shinde family was murdered in his own house and was succeeded by his son Jankoji. In 1761, the Shindes joined the Peshwa's army led by Sadashivrao Bhau against the Afghan forces of Ahmad Shah Abdali at the Third Battle of Panipat. In this battle, Jankoji was taken prisoner and put to death. Dattaji, brother of Jayappa had also been killed previous year in a battle wth Abdali's forces at Buradi Ghat in 1760 and so Mahadji being the next successor in line ascended as the ruler of the Gwalior state.

Mahadji too had fought at Panipat, and made a hair-breadth escape from the rout of the Maratha army. He suffered a serious wound in his leg, which left him with a limp for the rest of his life.

Besides his military training, Mahadji was also literate in Persian and Sanskrit. He used to read all his audits himself, unlike other rulers of later medieval India who employed scribes.

When the Maratha army crossed the Narmada in February 1770, the Jat king Nawal Singh of Bharatpur opposed them. However, in the battle on 6 April 1770 Mahadji defeated him and Maratha supremacy over the North was re-established.

In 1777, Mahadji provided military assistance to the Peshwas against the Maratha army of Kolhapur. Mahadji besieged and attacked the town of Karvir in Kolhapur.

In 1773, Peshwa Narayanrao was murdered in a conspiracy involving his uncle Raghunathrao who placed himself as the next Peshwa although he was not a legal heir. Meanwhile, a group of twelve Maratha chiefs known as the Barbhai council made Narayanrao's infant son Sawai Madhavrao the legal Peshwa. The Barbhai council included Mahadji Shinde and Nana Phadnis, who was acted as the Peshwa's regent. Raghunathrao, unwilling to give up his position of power, sought help from the British East India Company at Bombay.

In 1777 Nana Phadnis violated his treaty with the Calcutta Council by granting the French a port on the west coast. The British replied by sending a force towards Pune. Mahadji Shinde joined forces with other Maratha generals to fight the British army supported by Raghunathrao.

In January 1779, the forces of British troops consisting of about 3,900 men under command of Col. Egerton marched towards Pune. They were joined on the way by Raghunath's forces, adding several thousand more soldiers, and more artillery. The Maratha army was commanded by Mahadji Shinde and Tukojirao Holkar. Mahadji slowed down the British march by firing from above a hill and sent forces under Jiwbadada Bakshi and Lakhbaji to cut off its supply lines by burning food and fodder. When they found out about this, the British halted at Talegaon near Pune. The Maratha cavalry harassed the British from all sides and applying a scorched earth policy, burnt farmland and poisoned wells. The British began to withdraw from Talegaon in the middle of the night, but the Marathas attacked, forcing them to halt at Wadgaon, where the British force was surrounded on 12 January 1779.

On 16 January, the British signed the Treaty of Wadgaon that forced the Bombay government to relinquish all territories acquired by East India Company in western India since 1773 which included Sashti (Salsette), Thane, and the entire Gujarat region. The British were also made to pay Rs. 41,000 as an indemnity to the army of Mahadji. It was agreed that Raghunathrao would be handed to the Marathas. On 18 January 1779 Mahadji captured Raghunathrao and his forces. He also defeated and arrested Sakharam Bapu and imprisoned him in the jail of Sinhagad.

The British Governor-General in Bengal, Warren Hastings, rejected the Treaty of Wadgaon on the grounds that the Bombay officials had no legal power to sign it, and ordered Colonel Goddard to secure British interests in the area. Goddard's 6,000 troops captured Ahmedabad in February 1779, and Bassein in December 1780. Another Bengal detachment led by Captain Popham captured Gwalior in August 1780. Hastings sent yet another force commanded by Major Camac to harass Mahadji Shinde. In February 1781, the British beat Mahadji at the town of Sipri, but every move they made after that was shadowed by his much larger army, and their supplies were cut off, until they made a desperate night raid in late March, capturing not only supplies, but even guns and elephants. Thereafter, the military threat from Shinde's forces to the British was much reduced.

After Mahadji's defeat, he proposed a new treaty, known as the Treaty of Salbai, between the Peshwa and the British that would recognize Sawai Madhavrao as the Peshwa and grant Raghunathrao a pension. The treaty also returned to Shinde all his territories west of the Yamuna and so was made to withdraw to Ujjain. Mahadji was recognized as an independent chief and not as a vassal of the Peshwa. A resident, Mr. Anderson (who had negotiated the treaty) was at the same time appointed to Mahadji's court.

Mahadji took full advantage of the system of neutrality pursued by the British to resurrect Maratha power over Northern India. In this he was assisted by Benoît de Boigne who increased Sindhia's regular forces to three brigades. With these troops Sindhia became a power in northern India.

After the growth in power of feudal lords like Malwa sardars, landlords of Bundelkhand and Rajput kingdoms of Rajasthan, they refused to pay tribute to Mahadji. So he sent his army conquer the states such as Bhopal, Datiya, Chanderi (1782), Narwar, Salbai and Gohad. He launched an expedition against the Raja of Jaipur, but withdrew after the inconclusive Battle of Lalsot in 1787.

The strong fort of Gwalior was then in the hands of Chhatar Singh, the Jat ruler of Gohad. In 1783, Mahadji besieged the fort of Gwalior and conquered it. He delegated the administration of Gwalior to Khanderao Hari Bhalerao. After celebrating the conquest of Gwalior, Mahadji Shinde turned his attention to Delhi.

On June 17, 1788 Mahadji's armies defeated Ismail Beg, a Mughal noble who resisted the Marathas. The Rohilla chief Ghulam Kadir, Ismail Beg's ally, took over Delhi, capital of the Mughal Empire, and deposed and blinded the Emperor Shah Alam II, placing a puppet on the Delhi throne. Mahadji intervened, taking possession of Delhi on October 2, restoring Shah Alam to the throne and acting as his protector. Mahadji sent de Boigne to crush the forces of Jaipur at Patan (June 20, 1790) and the armies of Marwar at Merta on September 10, 1790.

Mahadji reinstated the Mughal emperor Shah Alam II on his throne at Delhi, receiving in return the title of deputy Vakil-ul-Mutlak or vice-regent of the Empire and that of Vakil-ul-Mutlak being at his request conferred on the Peshwa.

Another achievement of Mahadji was his victory over the Nizam of Hyderabad’s army in a battle. The Nizam ceased be a factor in the north Indian politics after this battle and it generally confined itself in the Deccan afterwards. After the peace made with Tipu Sultan of Mysore in 1792, Mahadji successfully exerted his influence to prevent the completion of a treaty between the British, the Nizam of Hyderabad, and the Peshwa, directed against Tipu.

By 1790 he had re-established Maratha power over North India.

De Boigne defeated the forces of Tukaji Holkar at Lakheri on 1 June 1793. Mahadji was now at the zenith of his power, when he died on February 12, 1794 at Wanowri near Pune. He left no heir, and was succeeded by Daulatrao Sindhia, a grandson of his brother Tukaram Shinde, who was scarcely 15 years of age at the time.