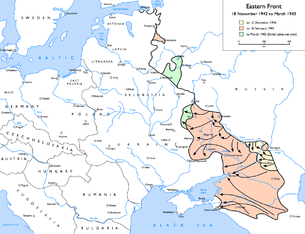 Operation Saturn, revised as Operation Little Saturn, was a Red Army operation on the Eastern Front of World War II that led to battles in the northern Caucasus and Donets Basin regions of the Soviet Union from December 1942 to February 1943.

On 17 May 1942, German Army Groups A and B launched a counteroffensive against advancing Soviet armies around the city of Kharkov, resulting in the Second Battle of Kharkov;[1] this would ultimately be expanded on 28 June into Case Blue, which aimed for the capture of the Caucasus oil fields.[2] By 6 July, General Hermann Hoth's Fourth Panzer Army had taken the city of Voronezh, threatening to collapse the Red Army's resistance.[3] By early August, General Paul Ludwig Ewald von Kleist's First Panzer Army had reached the oil center of Maykop, 500 kilometres (310 mi) south of the city of Rostov,[4] which had been taken by the Fourth Panzer Army on 23 July.[5] The rapid German advance threatened to cut the Soviet Union off from its southern territories, while also threatening to cut the lend-lease supply lines from Persia.[6] However, the offensive began to peter out, as the offensive's supply train struggled to keep up with the advance and spearhead units began to run low on fuel and manpower;[7] for example, some panzer divisions were down to 54 tanks.[8]

Operation Uranus was the codename of the Soviet strategic operation in World War II which led to the encirclement of the German Sixth Army, Third and Fourth Romanian armies, and portions of the German Fourth Panzer Army. The operation formed part of the ongoing Battle of Stalingrad, and was aimed at destroying German forces in and around Stalingrad. Planning for Operation Uranus had commenced as early as September 1942, and was developed simultaneously with plans to envelop and destroy German Army Group Center and German forces in the Caucasus. The Red Army took advantage of the fact that German forces in the southern Soviet Union were overstretched, using weaker Romanian and Italian armies to guard their flanks; the offensive's starting points were established along the section of the front directly opposite Romanian forces. These Axis armies lacked heavy equipment to deal with Soviet armor.

Operation Winter Storm (Unternehmen Wintergewitter), undertaken between 12–23 December 1942, was the German Fourth Panzer Army's attempt to relieve encircled Axis forces during the Battle of Stalingrad. In late November, the Red Army completed Operation Uranus, which resulted in the encirclement of Axis personnel in and around the city of Stalingrad. German forces within the Stalingrad Pocket and directly outside were reorganized under Army Group Don, under the command of Field Marshal Erich von Manstein. As the Red Army continued to build strength, in an effort to allocate as many resources as possible to the eventual launch of the planned Operation Saturn, which aimed to isolate Army Group A from the rest of the German Army, the Luftwaffe had begun an attempt to supply German forces in Stalingrad through an air bridge. However, as the Luftwaffe proved incapable of carrying out its mission and it became more obvious that a successful breakout could only occur if it was launched as early as possible, Manstein decided to plan and launch a dedicated relief effort.

The first stage — an attempt to cut off the German Army Group A in the Caucasus — had to be rapidly revised when General Erich von Manstein launched Operation Winter Storm on 12 December in an attempt to relieve the trapped armies at Stalingrad. While General Rodion Malinovsky's Soviet 2nd Guards Army blocked the German advance on Stalingrad, the modified plan Operation Little Saturn was launched on 16 December.

This operation consisted of a pincer movement which threatened to cut off the relieving forces. General Fyodor Isidorovich Kuznetsov's 1st Guards Army and General Dmitri Danilovich Lelyushenko's 3rd Guards Army attacked from the north, encircling 130,000 soldiers of the Italian 8th Army on the Don and advancing to Millerovo. (Manstein sent the 6th Panzer Division to the Italians' aid — of the 130,000 encircled troops, 45,000 survived to join the Panzers at Chertkovo on 17 January). To the south the advance of General Gerasimenko's 28th Army threatened to encircle the 1st Panzer Army and General Trufanov's 51st Army attacked the relief column directly. In a daring raid, by 24 December tanks of the 24th Tank Corps had reached Tatskinskaya, the air base closest to Stalingrad from which the Luftwaffe had been supplying the besieged troops. The Soviet tanks drove through snowstorms onto the airfield and roamed about for hours, destroying the German transport planes at their leisure. (see main article Tatsinskaya Raid)

With the relief column under threat of encirclement, Manstein had no choice but to retreat back to Kotelnikovo on 29 December, leaving the encircled Germans at Stalingrad to their fate. Of the 200,000 - 250,000 soldiers encircled 90,000 survived to be taken prisoner. Only 5,000 lived to return to Germany. The limited scope of the Soviet offensive also gave General Ewald von Kleist time to withdraw his Army Group A in the direction of the Kuban, with the exception of 1st Panzer Army which joined Army Group Don via Rostov.