The Settlers of Catan

The Settlers of Catan

The Settlers of Catan is a multiplayer board game designed by Klaus Teuber and first published in 1995 in Germany by Franckh-Kosmos Verlag (Kosmos) as Die Siedler von Catan. Players assume the roles of settlers, each attempting to build and develop their settlement while trading and acquiring resources. Players are rewarded points as their settlements grow; the first to reach a set number of points is the winner.

The Settlers of Catan was one of the first German-style board games to achieve popularity outside of Europe.[1] Over 15 million games in the Catan series have been sold,[2] and the game has been translated into thirty languages from the original German.[2] It has been called "the board game of our time" by the Washington Post.[3]

The game is well suited for family play,[citation needed] since at no point in the game is any player eliminated.

The standard game and its many expansions are published by Kosmos, Mayfair Games, Filosofia, Capcom, 999 Games, Κάισσα, and Devir.

The players in the game represent settlers establishing colonies on the island of Catan. Players build settlements, cities, and roads to connect them as they settle the island. The game board representing the island is composed of hexagonal tiles (hexes) of different land types which are laid out randomly at the beginning of each game;[4] new editions of the game also depict a fixed layout in their manual, which has been proven to be fairly even-handed by computer simulations, and recommend this to be used by beginners.

Players build by spending resources (brick, lumber, wool, grain, and ore), represented by resource cards; each land type, with the exception of the unproductive desert, produces a specific resource. On each player's turn, he or she rolls the two six-sided dice, determining which hexes produce resources. Any players with settlements or cities adjacent to hexes marked with the number rolled receive resource cards of the appropriate type. There is also a robber token on the board; if a player rolls 7, the robber must be moved to any hex (except the desert space), which will no longer produce resources until the robber is moved again; the player may also steal a resource card from another player. In addition, when a 7 is rolled, all players with more than 7 resource cards must discard half. 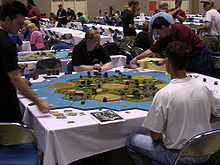 A giant game of Settlers being played at Gen Con Indy 2003. This is one of many Settlers of Catan custom extra-large boards seen during demonstrations and tournaments at Gen Con.

Players are allowed to trade resource cards among each other if both parties to the trade agree on the terms; players may also trade off-island (in effect, with the non-player bank) at a ratio of four of one resource for one of any other. By building settlements in certain spots on the edge of the board (ports), players may trade with the bank at three-to-one or two-to-one ratios.

The goal of the game is to reach ten victory points on one's turn. Players score one point for each settlement they own and two for each city. Various other achievements, such as establishing the longest road and largest armies, grant a player additional victory points.

Teuber's original design was for a large game of exploration and development in a new land.[5] Between 1993 and 1995 Teuber and Kosmos refined and simplified the game into its current form. Unused mechanics from that design went on to be used in Teuber's following games, Entdecker and Löwenherz. The game's first expansion, Seafarers of Catan, adds the concept of exploration, and the combined game (sometimes known as "New Shores") is probably the closest game to Teuber's original intentions.[1]

The Settlers of Catan series

The enduring popularity of The Settlers of Catan has led to the creation of a great many spinoff games and products, starting in 1996 with The Settlers of Catan card game (later renamed to Catan Card Game), and including a novel, Die Siedler von Catan, by Rebecca Gablé (ISBN 3-431-03019-X) set on the island of Catan.

After releasing the card game, Teuber began to publish expansions for the base game. The first, Seafarers of Catan, was released in 1997; it was later retitled Catan: Seafarers. Seafarers adds ships which allow players to cross sea hexes, and includes scenarios in which players explore an archipelago of islands. It also adds gold-producing hexes which allow players to take the resource of their choice.

In 1998, the first historical scenario pack was released, which allows players to reenact the building of the pyramids of Egypt or the expansion of Alexander the Great's empire using Settlers game mechanics.

In 1999, expansions to allow fifth and sixth players were released for both Settlers and Seafarers. As well as extra components to accommodate more players, the expansions add an extra building phase to the turn, so that players can participate in the game during each others' turns.

A second scenario pack for Settlers concerning the building of the Great Wall of China and the Trojan war was released in 2001, and in 2002 a travel edition of Settlers was published, featuring playing pieces which slot into a fixed-layout board. Atlantis: Scenarios and Variants was published in 2005. Atlantis is a boxed set which collected a number of scenarios and variants published in gaming magazines and at conventions, such as The Volcano and The Great River. The set also includes a deck of event cards which replace the dice in the main game, giving it a less random spread of resource production.

A deck of event cards which replaces the dice in the base game, released in 2005, won the 2007 Origins Award for Game Accessory of the Year.

The third large expansion, Traders & Barbarians, was announced for release in 2007. It was released in 2008. Traders & Barbarians collects together a number of smaller scenarios, some of which have previously been published elsewhere. The set includes an official two-player variant.

Two special editions of the game were released in 2005: a collector's edition of the base game and Cities and Knights, with hand-painted 3D tiles and playing pieces, and a 10th anniversary edition with detailed plastic pieces.

Mayfair Games released a fourth edition of The Settlers of Catan in 2007. Aside from one minor rule change, the only differences were new artwork, a locking frame, a deeper box, and an insert tray to hold the components. Soon after its release, two changes were made to the fourth edition. The robber playing piece was changed from a black to a grey color and the soldier development card was renamed a knight. Fourth-edition versions of Cities & Knights, Seafarers, and the 5-6 player expansions were also released.[6]

Since the game's release, a number of computer games have been published based on Catan and its spinoffs. The first officially sanctioned English-language release was Catan: The Computer Game developed for the PC by Castle Hill Studios and published by Big Fish Games.[citation needed] This off-line game was available from MSN,[7] as it was acquired by Microsoft who also released Catan Online in August 2005 on MSN Games, the game now requiring an internet connection. On June 1, 2009 the MSN version of Catan was discontinued. The same game later became available on other online services. Teuber and Big Huge Games recently worked together to produce Catan, a version of Settlers for the Xbox Live Arcade. It was released on May 2, 2007.

An official Nintendo DS version of Catan has been developed by exozet games in collaboration with Klaus Teuber. The game can be played against computer opponents, and includes Nintendo WiFi online play. It has yet to be released, though it was announced in 2008.[8]

An official The Settlers of Catan online game was announced on Dec. 16, 2002.[9] Catan Online World allows players to download a Java application that serves as a portal for the online world and allows online play with other members. The original board game may be played for free, while expansions require a subscription membership.

There have also been several unauthorized video game implementations of Settlers. One of these unauthorized versions, called "Java Settlers", was developed by Robert S. Thomas as part of his Ph.D. research at Northwestern University. His dissertation is available from the abandoned project home page.[10] The source code for Thomas' Settlers of Catan implementation along with the AI code was released under the GNU General Public License.

Catan and some of its expansions are also available in various languages for mobile phones, iPhone, iPad, iPod Touch, BlackBerry and Android smartphones.

Mayfair Games announced a version of Catan is coming to Facebook.[13]

Catan is available for download and play from Xbox Live Arcade and Playstation Network.[14][15]

In 2010 Vectorform showcased a Microsoft Surface game for Settlers of Catan.[16]