David Fisher is an award-winning English artist and designer based in Midsomer Norton, Somerset. He was a prolific designer and painter of pub signs before securing a unique commission to create vast murals to improve UK service stations. He has won many awards including the Holburne Museum of Art's portrait award. His work has been praised by Victoria Glendinning, Humphrey Ocean RA and John Leighton, Director of the National Galleries of Scotland.[1]

From 1961 – 1966 he served an apprenticeship as a signwriter and decorator for F.Speed and Sons in Midsomer Norton.[2] From 1966–1970 he attended the West of England College of Art,[3] now the School of Creative Arts, Bristol. He then went self-employed as a freelance artist and designer.

After leaving West of England College of Art he started a business at his home at the Hole in the Wall, Church Square, Midsomer Norton, painting pictorial pub signs for Courage Brewery and Butcombe Brewery. In this role he designed and created signs for pubs in Somerset, Wiltshire, South Gloucestershire and South Wales. He completed almost 400 signs in a fifteen year period.[4]

In the 1980s he commenced a ten-year period producing large scale murals for Trusthouse Forte's Welcome Break service areas on the country's motorway network.[5] Fourteen were created, some measuring over sixty feet in length and eight feet high, setting a decorative theme for each site depending on its location. Some depicted local historical events, others recorded local battles, while some just informed travellers of attractions in that part of the country. These were placed in the following service station locations:[6]

It is even possible to purchase prints of some of the service station murals.[7]

During this period, he also undertook a number of notable commissions, including working for RoadChef, Saudi Arabia Air Force, The Personalised Plates website, Qaboos bin Said al Said, the Sultan of Oman, National Giro and the Property Services Agency.

After working for 25 years in the corporate field, he moved towards more personal choices for his art, specialising in detailed landscapes, seascapes and portraits in both oil and watercolour.[8][9] 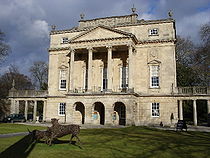 In 2008 he won the Holburne Museum of Art's biennial portrait competition for Dead Man Posing, a portrait of Philip Ledbury from Frome, an artist who had been diagnosed with leukaemia. The prize was a commission of £5,000 for a portrait to be added to the Holburne’s collection of portraiture. The panel of judges included the author Victoria Glendinning, John Leighton, Director of the National Galleries of Scotland and the artist Humphrey Ocean RA. They presented the award to him at a ceremony on 17 October.[10]

He regulatly exhibits his work, and belongs to the Old Bakery Artists group that has been meeting monthly in Radstock[11] since 2000.[12] 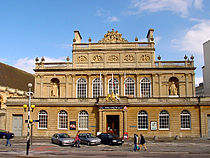