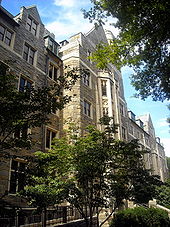 Copley Hall is a sophomore dormitory.

A majority of undergraduates, seventy-two percent, live on-campus.[1] The remainder live off-campus, mostly in the Georgetown, Burleith, and Foxhall neighborhoods.[2] On-campus housing is not available for main campus graduate students.[3] On-campus housing at Georgetown is the second most expensive in the country as of 2010.[4] 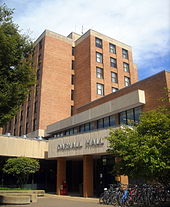 Darnall Hall provides housing first-year students. It was built as a women-only dorm, and together with its male counterpart, Harbin Hall, cost $5.6 million.[5] At the time Darnell opened in 1965, women were only in the school of Nursing, the School of Foreign Service and the Institute of Languages and Linguistics.[5] It is the only Georgetown dormitory named for a woman, Eleanor Darnall, who was the mother of Georgetown University founder John Carroll and an early supporter of Catholic education in America.[6][7] Darnall is one of two Georgetown dormitories located within ANC District 2E04. As a result, it has been the focus of efforts to recruit Georgetown students to run for election to this District of Columbia position.[8][9]

Darnall Hall was the home of one of two cafeterias on campus operated by Marriott International until Darnall Café, known for its milkshake machines, was shut down after the 2004-2005 academic year. Restaurateur C.W. Chon negotiated a lease for the former cafeteria space, which reopened as a sit-down restaurant in April 2008 named Epicurean.[10] Chon had been chosen in 2006 based on his success with other Washington, D.C. establishments.[11]

Darnall was last renovated in 1996. There are six floors with double-occupancy rooms, two common bathrooms, and a common room with a kitchen. The average room is 16.5 feet by 10.5 feet.[12] A popular myth states that Cornell University or Playboy Magazine named Darnall as one of the most sexually active in the United States, however no such study by either institution exists.[13] In addition, the building houses the Office of Affirmative Action Programs, Auxiliary Services, Counseling and Psychiatric Services, GOCard Services, Learning and Disability Services, Off-Campus Housing Resource Services, and the Student Health Center.[6]

Harbin Hall was opened in 1965 and is a dorm for first-year students. Its name comes from George F. Harbin, a professor at Georgetown. It underwent renovations in 2000, opening in the fall to new students.

Former President Bill Clinton was a resident of Harbin Hall during his undergraduate career at Georgetown.[14] 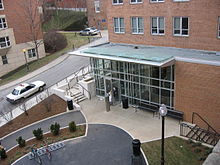 New South Hall is a first-year student dorm. It opened in 1959, and its name is due to its placement as the southern most building on the main campus at the time of its completion. The building was renovated in 2004.

The name reflects the oldest Georgetown building, which had been called "Old South," and was located near New South's location. Old South was replaced by Ryan Hall in 1903. When New South was completed in September 1959, it was the southernmost building on campus.[15][16] Money for the dormitory was made available by the federal government largely because of the 1957 launch of Sputnik 1, which galvanized the government to fund educational initiatives. However this required that a "no-frills" building be built. Since then, renovation to the exterior has been prevented by the United States Commission of Fine Arts, which considers it a "part of the historic skyline of Georgetown."[17] Its monolithic appearance has been criticized by many from students to President Lyndon B. Johnson.[15] In addition to student housing, New South also houses the office of the University Architect, University Facilities, Facilities Planning, and the MSB Technology Center.

New South's cafeteria was completed in February 1960, and at the time was the "biggest non-military food service in the Washington area."[15] In 2003 the dining hall was closed and replaced by neighboring Leo J. O'Donovan, S.J. Dining Hall. In 2004, the building underwent a $21 million dollar interior renovation, and a new entrance was created.[18] The old cafeteria space was converted into room for dance classes called "Deep South," first opened in February 2004, though many proposals for its use were made.[19] The dormatory was formally rededicated in November 2004.[20] Further plans to build a student center in the building have been stymied by general opposition to construction from Georgetown residence and the Advisory Neighborhood Commission.[21] Amenities added during renovations were named as the reason why Georgetown was listed in the top ten priciest college dormitories according to U.S. News & World Report.[22]

The four floors are co-ed and contain roughly one-hundred students, and each double room in New South contains a sink.[23] Each floor has two resident resident assistants and a Chaplain-in-Residence.[24] The dormatory has a certain reputation, due in part to its long corridors, of being more social but also being prone to vandalism. However, New South was recognized as the Georgetown Hall of the Year for the 2005-2006 academic year and recognized by The Voice as the Best Dorm to Live in 2006-2007. Current university president John J. DeGioia lived in New South while a student.[20] The University mascot, Jack the Bulldog, lives on the 4th floor with Jesuit-in-Residence Father Steck.[25] 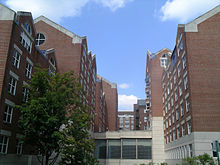 Village C is divided between East and West wings.

Village C opened in 1986 and has an East and West wing. The West wing is exclusively available to first-year students and is split into an X and Y wing. Every room in Village C has its own bathroom.

Alumni Square is located just outside the University main gates. The building complex was completed in 1980, and comprises four buildings: Groves, Beh, McBride and McCahill, named after Georgetown alumni. The complex is constructed around a grassy courtyard with shade trees, park benches and a brick walkway from O Street to N Street.

These buildings were comprise the Southwest Quad, which was completed in 2003. 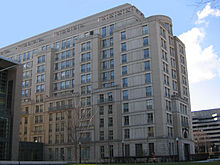 The Gewirz Student Center is the only housing on the Law Center campus.

The Gewirz Student Center is a dorm for first year law students and houses approximately 300 people. It has 8 floor plans for rooms, and common areas and a health center.[26]