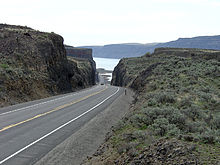 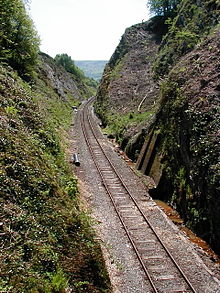 Talerddig Cutting in 2001. Having a depth of 120 feet, this cutting was the deepest in the world at the time of its opening in the early 1860s. The original near-vertical sides have since been trimmed back

In civil engineering, a cut or cutting is where soil or rock material from a hill or mountain is cut out to make way for a canal, road or railway line.

In cut and fill construction it keeps the route straight and/or flat, where the comparative cost or practicality of alternate solutions (such as diversion) is too prohibitive. Contrary to the general meaning of cutting, a cutting in construction is mechanically excavated or blasted out with carefully placed explosives. The cut may only be on one side of a slope, or directly through the middle or top of a hill. Generally, a cut is open at the top (otherwise it is a tunnel). A cut is (in a sense) the opposite of an embankment.

When used in reference to transportation routes, it reduces the grade of the route.

Cuts can be created by multiple passes of a grader, scraper or excavator, or by blasting.[1] One unusual means of creating a cut is to remove the roof of a tunnel through daylighting. Material removed from cuts is ideally balanced by material needed for fills along the same route, but this is not always the case when cut material is unsuitable for use as fill.

The word is also used in the same sense in mining, as in an open cut mine.

The term cutting appears in the 19th century literature to designate rock cuts developed to moderate grades of railway lines.[2] Railway Age's Comprehensive Railroad Dictionary defines a cut as "a passage cut for the roadway through an obstacle of rock or dirt."[3]

There are at least two types of cut, sidehill cut and through cut. The former permits passage of a transportation route alongside of or around a hill, where the slope is transverse to the roadway. A sidehill cut can be formed through removal only, cutting on the high side balanced by filling on the low side, or less commonly, by building up fill to achieve a flat surface for the route. In contrast, through cuts require removal of material where the adjacent grade is higher on both sides of the route. In this case, "little or no material can be excavated by sidecasting", i.e., removed material cannot be dumped alongside the route.[4]