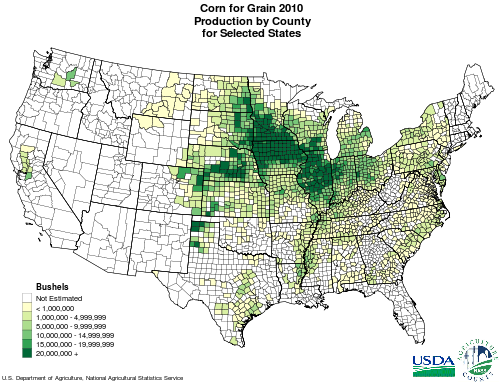 Production of corn in the United States.

The Corn Belt is a region of the Midwestern United States where corn has, since the 1850s, been the predominant crop, replacing the native tall grasses. By 1950, 99% of the corn was grown from hybrids. Most corn is fed to livestock, especially hogs and poultry. In recent decades soybeans have grown in importance. The U.S. produces 40% of the world crop.[1]

Geographic definitions of the region vary. Typically it is defined to include Iowa, Illinois, Indiana, Michigan, and eastern Nebraska, eastern Kansas, southern Minnesota and parts of Missouri.[2] As of 2008, the top four corn-producing states were Iowa, Illinois, Nebraska, and Minnesota, together accounting for more than half of the corn grown in the United States.[3] The Corn Belt also sometimes is defined to include parts of South Dakota, North Dakota, Ohio, Wisconsin, Michigan, and Kentucky.[4] The region is characterized by relatively level land and deep, fertile soils, high in organic matter.[5]

More generally "Corn Belt" represents the most intensively agricultural region of the Midwest, connoting a lifestyle based on ownership of family farms, with supporting small towns and powerful farm organizations that lobbied to obtain higher prices.[6][7]

In the era from 1860 to 1982, new agricultural technology transformed the Corn Belt from a mixed crop-and-livestock farming area to a highly specialized cash-grain farming area. While the landscape was greatly modified, the family farm remained the normal form. Its acreage doubled, as farmers bought out their neighbors (who then moved to nearby towns). After 1970 increased crop and meat production required an export outlet, but global recession and a strong dollar reduced exports, depressed prices below costs of production, and created serious problems even for the best farm managers.[2]

Vice President Henry A. Wallace, a politician and pioneer of hybrid seeds, declared in 1956 that the Corn Belt developed the "most productive agricultural civilization the world has ever seen."[8]

Over the past few years farming of genetically modified crops, especially corn has dramatically increased. In only less than four years millions of acres have been planted. These new crops feature resistance to pests and the ability to tolerate herbicides. The increased farming of these crops has been encouraged by the potential cost savings, including reductions in input use. Genetic modifications have included input traits such as pest resistance and herbicide tolerance, providing advantages to farmers in the production phase without changing the final product. The input traits may increase farmers' net profits through savings in production costs, reducing chemical use, increased flexibility in crops planted, and in some cases, increased crop yield. It also gains improved nutritional characteristics. Genetically modified crops currently on the market are approved by the Food and Drug Administration (FDA), the Environmental Protection Agency (EPA), and USDA's Animal and Plant Health Inspection Service (APHIS) and are a result of very sizable investments, largely by private sector firms. GM corn is designed to resist damage from the European Corn Borer (ECB), a major insect pest in the Corn Belt. The impact of this insect is generally not seen until the damage has occurred because the borer tunnels inside the stalk. Benefits of genetically modified crops will vary from year to year and over different locations depending on environmental factors. The environmental benefits of herbicide-tolerant crops derive from the reduction in the number of chemical applications, reduction in energy use due to fewer passes across the fields, and reduction in the need for tillage. Runoff of chemicals into groundwater could be minimized and no-till operations can reduce the erosion of top-soil.[9] The potential risk is the currently the main limiting factor in the expansion of GM corn and its use in the Corn Belt, mostly because the technology is still relatively new and the repercussions are yet to be seen.