Contra: Hard Corps, released in Japan as Contra: The Hard Corps (魂斗羅 ザ・ハードコア?)[1] and in Europe and Australia as Probotector, is a side-scrolling run and gun-style shoot-'em-up video game released by Konami for the Sega Genesis/Mega Drive in 1994. It is part of the Contra series and serves as a follow-up to Contra III: The Alien Wars.

Set five years after the events of Contra III: The Alien Wars, an elite team of commandos called the "Unified Military Special Mobile Task Force K-X", also known as the "Contra Hard Corps", has been assembled to combat the rapid spread of crime and illegal activities following the war. When an unknown hacker infiltrates the city's security system and reprograms a group of unmanned robots to cause havoc, the Hard Corps are deployed to handle the situation.[2][3] As the game progresses, the player will uncover a plot involving Colonel Bahamut, a former war hero, who seeks to overthrow the Government by developing new types of weapon using a stolen alien cell.[4] 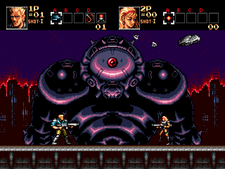 Ray and Sheena confront the "Maximum Jumbo", a giant robot sub-boss in Stage 1.

Contra: Hard Corps follows the same gameplay as its predecessors. The objective is to walk through the end of each stage, shoot at every enemy that gets in the way, and fight the boss awaiting at the end. Unlike previous Contra games, such as Contra III, which featured overhead segments in addition to the regular side-view stages, all the stages in Hard Corps use the standard side-view perspective. Another difference is the player can now choose between one of four unique player characters.[8] Like in previous Contra games, up to two players can play simultaneously, but they're not allowed to choose the same character.[8]

The controls are similar to Contra III, but has been adapted to work with the Genesis' three-button controller. The three buttons are used for shooting, jumping, and switching between weapons. While firing their gun, the player can switch between two shooting styles: one which allows for movement while shooting, and another that keeps the character still, allowing only to change their aim.[9] The player can also jump down from certain platforms, as well as move on walls and ceilings like in Contra III. A new ability added to the game is a sliding technique performed by holding the direction-pad diagonally downwards while pressing the jump button. The character will be invulnerable while sliding and can even harm certain enemies.[10] When controlling Browny, the player can also hover in the air by pressing the jump again during mid-air.[11]

The multiple weapon system from Contra III has been revamped. The player can now carry up to four different weapons, as well as a supply of bombs. Like in previous games, weapons are obtained from flying capsule pods. This time the weapon items are now labeled "A", "B", "C", and "D", which will vary depending on the character controlled by the player. Each player begins with a standard semi-automatic machine gun, which will be replaced by the character's A-type weapon whenever it's picked. When the player loses a life, their current weapon will be lost. Unlike Contra III, the player's supply of bombs will remain the same when a life is lost.[12]

Another unique feature to Contra: Hard Corps is the addition of branching paths that allows the player to play through a different set of stages depending on key decisions made during key moments of the game's story. There are four possible paths in the game, each with its own final boss and ending, as well as hidden bonus stage for a total of five different endings.[13] A sixth possible outcome also exists when the player sides with Colonel Bahamut when asked to, but the game will count this as a "game over" and not as a proper ending.

The Japanese version, titled Contra: The Hard Corps, was made significantly easier than its North American counterpart due to the addition of a life gauge that allows the player to take three hits from an enemy before losing a life. The Japanese version also features unlimited continues, in contrast with the American, which only provides five chances. The Japanese cover features an illustration drawn by animator Yasuomi Umetsu, who also provided some of the character art in the game's manual.

The PAL version of the game is titled Probotector and like the European localizations of previous Contra games for home consoles, the main characters and some of the enemies were renamed and replaced with robotic counterparts (Browny was left unchanged, with only his name changed). The plot was also rewritten, with Colonel Bahamut and Dead-Eye Joe being redesigned as humanoid aliens, and the alien cell was replaced with a computer device called the "X-Drive". The gameplay is the same as the North American version, but the player only has four continues in the European version, instead of five like in the North American release.

Some cutscenes were also altered. For example, the player character no longer identifies the boss of Stage 1, a robot previously thought unmanned, to be piloted by a man, or Dr. Geo Mandrake being eaten by a monster created in his merger machine. It is also impossible to side with the Alien General in this version, thus eliminating one of the endings[14].

The tune "Simon 1994 RD" is a remix of "Vampire Killer", a recurring theme music in the Castlevania series. The track is played in the secret Battle Stadium stage against the first enemy, an afro-haired cyborg who fights the player with a whip, as well as fishes thrown like a boomerang. His design is a pastiche of Castlevania protagonist Simon Belmont, as well as of Japanese singer Masato Shimon.

Developed by Arc System Works, Hard Corps: Uprising is a direct prequel to Contra: Hard Corps. The player will play the role of a young Colonel Bahamut, the main antagonist from Contra: Hard Corps. Although it has been announced that the game will only have two different characters to choose from (as opposed to four like in Contra: Hard Corps,) Konami is looking into adding additional characters via DLC. This is the first Contra game without the Contra brand name in the title, released on both Xbox Live Arcade (February 16, 2011) and PlayStation Network (March 15, 2011).[15]