Construction of One World Trade Center

Construction of One World Trade Center

Construction of One World Trade Center was deferred until 2006 because of disputes between port authority and the developer. Tishman Realty & Construction,[1] is the selected builder. The building reached ground level on May 17, 2008 and is scheduled to be completed by the end of 2012 and will open in January 2013.

The symbolic cornerstone of One World Trade Center was laid down in a ceremony on July 4, 2004,[2] but further construction of the tower was stalled until 2006. The cornerstone was temporarily removed from the site on June 23, 2006.[3] The project was delayed due to acrimonious disputes over money, security and design but the last major issues were resolved on April 26, 2006 with a deal between developer Larry Silverstein and the Port Authority of New York and New Jersey. During the summer of 2006, explosives were detonated at the World Trade Center construction site, testing the use of charges to clear bedrock for the building's foundation. Controlled explosions continued for approximately two months thereafter. 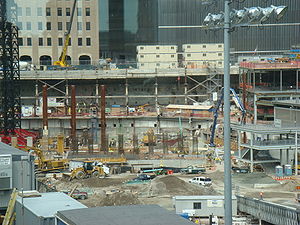 One World Trade Center tower construction as of August 7, 2007.

On January 9, 2007, a second set of beams was welded to the top of the first set. February 2007 estimates put the cost for construction of 1 WTC at $3 billion, or $1,150 per square foot ($12,380 per square meter).[6] Approximately $1 billion of insurance money recouped by Silverstein in connection with the September 11 attacks is being used for construction of the new One World Trade Center.[6] The State of New York is expected to provide $250 million toward construction costs, and the Port Authority agreed to finance another $1 billion through bonds.[7] In 2007, Tishman Construction Corporation of New York completed a row of steel columns at the perimeter of the construction site. Two tower crane bases were erected, each base containing a functioning luffing-jib tower crane. By the end of 2007, the tower’s footings and foundations were nearly complete.[8]

In January 2008, two construction cranes were moved into the construction site. The tower's concrete core began rising in the first months of 2008.[8] By February 22, 2008, 9,400 of the nearly 50,000 short tons (45,000 t) of steel necessary had been ordered.[9] By March 13, 2008, the steel for the tower had reached 70 feet (21 m) high, 10 feet (3 m) below street level.[10][11] From late March through early April, a 40-foot (12 m) tall mockup of a section of the tower's wall with twenty-four windows was tested by Construction Consulting Laboratory West in Ontario, California. The purpose of the testing was to ensure that the all-glass exterior of the tower will be able to withstand earthquakes and extreme weather conditions.[12] Testing also took place on another full-scale mockup south of Albuquerque, New Mexico. Both mockups passed the tests.[13] In mid-April, a batch of concrete had to be replaced after it failed a stress test.[14]

On May 17, 2008, the tower's steel breached street level when new sections were bolted to two of the twenty-four jumbo steel columns marking the building's footprint. The new column sections brought the height of the structure up to 15 feet (4.6 m) above street level.[15] In June, the chamfered steel skeleton of the tower's concrete base had begun to take shape.[16] By the end of the month, the concrete had been poured for the floor of the tower's basement level B3.[17] In his June 30, 2008 World Trade Center Rebuilding Assessment to New York Governor David Paterson, Port Authority executive director Chris Ward noted that roughly 90 percent of the construction contracts had been bid.[18] 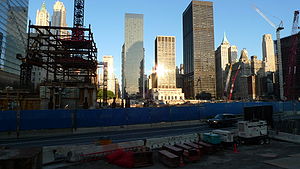 By August, 1 WTC had reached 25 feet (7.6 m) above street level.[19] During its September 16 meeting, the Port Authority board approved contracts for security and building management systems,[20] and 95% of the contracts needed to complete the tower had been signed.[21] The $20 million security contract includes sophisticated video analysis in which computers would alert security personnel to abnormal situations automatically.[22] On October 10, Collavino Construction poured an additional 520 cubic yards (400 m3) of concrete for the tower's concrete core, raising it to just above street level.[23]

By November 1, 2009, the twenty-four perimeter columns of 1 WTC were all erected, and construction of the second floor (the first floor above ground level) was nearly complete. In addition, The Port Authority of New York and New Jersey reported in their 2009 Q3 Annual Report that steel erection should commence by January 2010, and that the typical floor construction could begin.[26]

Steel and concrete installation continued in 2010, where two cranes were on site. The fifth floor was finished on January 16. In February, construction began on the sixth floor, the last floor of 1 WTC's base, and the Port Authority announced that the tower's steel superstructure had reached 200 feet (61 m) above street level.[27] By the end of March 2010, steel beams began to be erected for the second office floor. In April, the 45-degree octagon was installed, the building's steel frame had reached 26 floors, and concrete was completed on the base structure in the latter part of the month.[28]

In May 2010, the Port Authority stated that they were building close to one floor per week, and was projected that One World Trade Center would reach 55 stories by the end of 2010.[29] The cocoon system was also installed, marking the first time a cocoon safety system has been installed on a steel superstructure in the city.[30]

On July 13, 2010, workers found remains of an 18th century sailing ship at the World Trade Center site while excavating for the underground vehicle security center for One World Trade Center.[31] The remains of a 32-foot (9.8 m) section of the ship's hull and a 100-pound (45 kg) anchor were found. The hull had been truncated and the beams sawed.[32] The ship was likely used as landfill material during the early 19th century to help expand Manhattan. Timbers from the ship were removed and sent to a laboratory to try to date the vessel.[33] An additional section of the ship was found on the site in August 2011, giving historians more information about the vessel, which was active around the 1770s.[34]

By October 2010, the tower's steel superstructure reached 44 stories.[35][36] In November, stainless steel and glass facade panels were being prepared for later installation, with the panels scheduled to be assembled between the 20th and 24th floors.[37] On November 13, the first glass facade panels were installed on the 20th floor. Steven Coleman, spokesman for the Port Authority, stated, "Once they get rolling, they'll be able to install glass panels at a rate of one floor per week."[38] By November 17, the tower's steel had reached 48 stories.[39]

By June 15, 2011, One World Trade Center had reached the 70th floor, the glass facade installation had reached the 45th floor, and concrete flooring had been installed up to the 63rd.[44] On August 1, 2011, concrete workers and carpenters at the tower walked off the job one month after their labor contract had expired; the workers returned to work on August 3.[45][46]

As of November 21st, 2011, One World Trade Center's steel structure reached the 90th floor, concrete reached the 81st floor, and its glass has reached the 64th floor. [47]

One WTC was originally expected to be completed and opened by 2011,[48][49] but an October 2008 report by the PANYNJ pushed back the estimated completion of the tower to the second quarter of 2012, with the total estimated budget growing slightly from the 2007 estimate to $3.1 billion.[50] As of July 2011, the building remains scheduled to be completed by the end of 2013, according to the Port Authority.[51]