Sigismund's Column (Polish: kolumna Zygmunta III Wazy), erected in 1644, is located in Castle Square, Warsaw, Poland. It is one of Warsaw's most famous landmarks and one of the oldest secular monuments in northern Europe. The column and statue commemorate King Sigismund III Vasa, who in 1596 had moved Poland's capital from Kraków to Warsaw.

On the Corinthian column (which used to be of red marble), 8.5 m high, a sculpture of the King, 2.75-metres high, in archaistic armour is placed.[1] Sigismund's Column now stands at 22 metres and is adorned by four eagles. The king is dressed in armor and carries a cross in one hand and wields a sword in the other.[2] 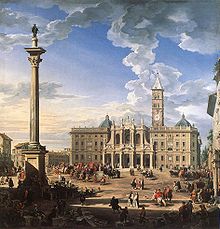 Erected between 1643 and 1644, the column was constructed on the orders of Sigismund's son and successor, King Władysław IV Vasa. It was designed by the Italian-born architect Constantino Tencalla and the sculptor Clemente Molli, and cast by Daniel Tym.[3][4] The Zygmunt's Column was modelled on the Italian columns in front of Basilica di Santa Maria Maggiore (erected in 1614 to designs of Carlo Maderno), and the Column of Phocas in Rome[3] (Władysław Vasa seen both of them during his visit to Rome in 1625).

In 1681 the monument was surrounded with a wooden fence, which was later replaced with a permanent iron fence.

The marble column itself was renovated several times in the next few centuries, most notably in 1743, 1810, 1821 and 1828. In 1854 the monument was surrounded with a fountain featuring marble tritons sculpted by the German, August Kiss.[3]

In 1863 the column was renovated somewhat again, but still needed work, and between 1885 and 1887 it was replaced with a new column of granite.[3] Between 1927 and 1930, the monument was again renovated, and was restored to its original appearance when the fountain and the fence around it were removed.

On 1 September 1944, during the Warsaw Uprising, the monument was demolished by the Germans, and its bronze statue was badly damaged.[3][2] After the war the statue was repaired, and in 1949 it was set up on a new column, made of granite from the Strzegom mine, a couple of metres from the original site.[1] The original broken pieces of the column can still be seen lying next to the Royal Castle.

On the side of the pedestal facing the Krakowskie Przedmieście is a plaque bearing the words in finest lettering reads[5]: