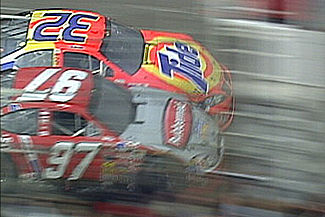 NASCAR's premiere racing division, the Sprint Cup Series, has seen many close finishes since the electronic scoring system was instituted in May during the 1993 season. To date the closest finish in the Sprint Cup Series is 0.002 seconds, happening twice. The first occurred during the 2003 Carolina Dodge Dealers 400. Ricky Craven won the race in a stunning, side panel rubbing battle to the checkers with Kurt Busch at Darlington Raceway. At the start/finish line, Craven edged out Busch by mere inches.[1] In 2011, this was matched at the 2011 Aaron's 499 at the Talladega Superspeedway, where Jimmie Johnson beat out Clint Bowyer by mere inches with racecars four abreast at the start-finish line.

Close finishes have been a part of the sport since the beginning of stock-car racing. One notable photo finish occurred in the inaugural Daytona 500 in 1959. Initially, NASCAR declared the race won by Johnny Beauchamp, but many fans felt that Lee Petty had won. It took 61 hours before the win was finally awarded to Petty.

Before margins of victory were scored in laps, car lengths or feet. Geoffrey Bodine defeated Ernie Irvan by 0.53 seconds in the 1993 Save Mart Supermarkets 300K. It was the first race utilizing electronic scoring. Now scoring can be measured down to seconds, or fractions of a second.

Close finishes are not limited to the Cup series. There have also been some photo finishes in the lower divisions. On October 30, 2010, in the Mountain Dew 250 at Talladega Superspeedway, Kyle Busch beat out Aric Almirola by 0.002 seconds, tying the record set by Terry Labonte over Joe Nemechek in the 1999 Touchstone Energy 300. The closest finish in the history of NASCAR's top three divisions (since 1993) occurred in the 1995 SuperTruck Total Petroleum 200 at Colorado National Raceway. Butch Miller beat Mike Skinner by only 0.001 second.