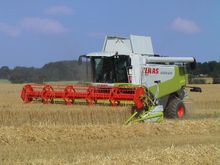 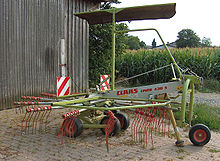 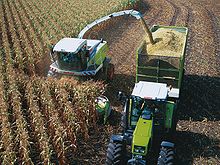 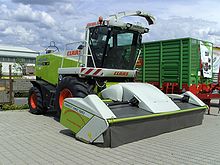 Claas is an agricultural machinery manufacturer founded in 1913, now based in Harsewinkel, Germany, in the state of North Rhine Westphalia. Their agricultural products are usually sold under the Claas name, except in North America where combines are distributed under the Lexion brand by Caterpillar dealers. The product range includes combine harvesters, forage harvesters, balers, mowers, rakes, tedders and other harvesting machines. In 2004, Claas purchased the Renault Agriculture tractor division from the Renault company of France, becoming 100% owned by Claas in 2008.[2]

The start of the Claas group took place in 1913, when August Claas developed the company in Clarholz, Germany. In 1919, the business was transferred to Harsewinkel, Germany, where the company focused on the production of reapers. Two years later the company obtained their first patent – for a knotter to efficiently bind straw. In 1930, the first Harvester was developed with the European market in mind with the first Pick-up Baler following in 1934. In 1936 Claas starts to market the first combine harvester built in Europe, as opposed to imported machines previously available. They then go on to off trailed combine harvester (reaper-binder) to the European market.

In 1946, following the war, Claas introduce self-propelled combine harvesters. By the mid 50s they open a new factory in Paderborn, Germany, and their first outside Germany – in Metz, France in 1962. Claas took over Josef Bautz, (agricultural machinery factory) in 1969 and expanded the product range to include green harvest machinery.

The Claas Museum is located in the Claas Technoparc in Harsewinkel, Germany, and features a display of history harvesting machines and agriculture equipment. Visitation is during working days only.