Hawaiian League
For other Committees of Safety, see Committee of Safety (disambiguation). 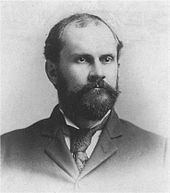 Lorrin A. Thurston long advocated annexation by the United States

The Committee of Safety, formally the Citizen's Committee of Public Safety, was a 13-member group of the Hawaiian League also known as the Annexation Club. The group was composed of American, Hawaiian, and European citizens who were members of the Missionary Party, as well as American and European residents in the Kingdom of Hawaiʻi that planned and carried out the overthrow of the Kingdom of Hawaiʻi on January 17, 1893. The goal of this group was to achieve annexation of Hawaiʻi to the United States. The new independent Republic of Hawaiʻi government was thwarted in this goal by the administration of President Grover Cleveland, and it was not until 1898 that the United States Congress approved a joint resolution of annexation creating the U.S. Territory of Hawaiʻi.

In January 1887 the Committee of Thirteen formed a secret society called the Hawaiian League. No official records were kept, but Lorrin A. Thurston (the grandson of American missionaries Asa Thurston and Lorrin Andrews) drafted the group's constitution. The group was headed by an executive committee of lawyers and businessmen mostly of American descent. Membership grew through the year, including some German and British citizens, and a few part-Hawaiians. Although the politicians changed the name of their party from "Missionary" to "Reform", many wanted to become part of the United States, not just reform the monarchy.[1]:347–350 This was why the Hawaiian League was also called the Annexation Club, although not often in public.

The Hawaiian League came into control of the Honolulu Rifles. Made of about 200 armed local (non-native) men, who fought under the command of enthusiastic annexationist Volney V. Ashford.[1]:352–353 In June 1887 the Hawaiian League used the Rifles to force King Kalākaua to enact the Bayonet Constitution which limited his power. After Queen Liliʻuokalani came to power in 1891, she attempted to restore power to the throne. This caused the group to act again.

See also: Overthrow of the Kingdom of Hawaii

The precipitating event[1]:582 leading to the overthrow was the attempt by Queen Liliʻuokalani to promulgate a new constitution which would have strengthened the power of the monarch relative to the legislature in which Euro-American business elites held disproportionate power, a political situation that was a direct result of the 1887 constitution. The conspirators' stated goals were to depose the queen, overthrow the monarchy, and seek Hawaii's annexation to the United States.[1]:353,587–88

On January 16, the Marshal of the Kingdom Charles B. Wilson was tipped off to the imminent planned coup. Wilson requested warrants to arrest the 13 member Committee of Safety, and put the Kingdom under martial law. Because the members had strong political ties with United States Government Minister John L. Stevens, the requests were repeatedly denied, fearing if approved, the arrests would escalate the situation. After a failed negotiation with Thurston,[2] Wilson began to collect his men for the confrontation. Wilson and Captain of the Royal Household Guard, Samuel Nowlein, had rallied a force of 496 men who were kept at hand to protect the Queen.

The Revolution ignited on January 17 when a policeman was shot and wounded while trying to stop a wagon carrying weapons to the Honolulu Rifles. The Committee of Safety feared the shooting would bring government forces to rout out the conspirators and stop the coup before it could begin. The Rifles garrisoned Ali'iolani Hale across the street from ʻIolani Palace and waited for the queen’s response.

As these events were unfolding, the Committee of Safety expressed concern for the safety and property of American residents in Honolulu. United States Government Minister John L. Stevens, advised about these supposed threats to non-combatant American lives and property[3] by the Committee of Safety, obliged their request and summoned a company of uniformed U.S. Marines from the USS Boston and two companies of U.S. sailors to land on the Kingdom and take up positions at the U.S. Legation, Consulate, and Arion Hall on the afternoon of January 16, 1893. 162 sailors and Marines aboard the USS Boston in Honolulu Harbor came ashore well-armed but under orders of neutrality. The sailors and Marines did not enter the Palace grounds or take over any buildings, and never fired a shot, but their presence served effectively in intimidating royalist defenders. Historian William Russ states, "the injunction to prevent fighting of any kind made it impossible for the monarchy to protect itself."[4] Due to the Queen's desire "to avoid any collision of armed forces, and perhaps the loss of life" for her subjects and after some deliberation, at the urging of advisers and friends, the Queen ordered her forces to surrender. The Honolulu Rifles took over government buildings, disarmed the Royal Guard, and declared a Provisional Government. 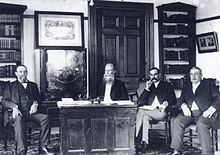 The Hawaiian League unofficially adopted the American Flag to appeal to the US and promote annexation. The flag was raised over ʻIolani Palace by Stevens on January 17, 1893. The flag was eventually lowered by James H. Blount that April for spreading a false presumption that the US had taken control.

Every government with a diplomatic presence in Hawaii recognized the Provisional Government within 48 hours of the overthrow, including the United States, although the recognition by the United States government and its further response is detailed in the section above on "American Response". Countries recognizing the new Provisional Government included Chile, Austria-Hungary, Mexico, Russia, the Netherlands, Germany, Sweden, Spain, Japan, Italy, Portugal, Great Britain, Denmark, Belgium, China, Peru, and France.[6] When the Republic of Hawaii was declared on July 4, 1894, immediate recognition was given by every nation with diplomatic relations with Hawaii, except for Britain, whose response came in November 1894.[7]

Members of the committees

Signatories of the January 16 letter:

Others who assisted in the overthrow: