In video games, strafing is the technique of moving the player's character from side to side, rather than forward and backward. In the context of first-person shooters, it refers to the movement alone, even when no weapon is being fired. Sidestepping is an integral part of any first-person or third-person shooter as it allows the player to dodge incoming fire while keeping their view aimed at their target.

The blue player circle strafes counterclockwise around his red adversary, while firing continually. Red, unable to keep track of the moving blue, misses his shots.

Particularly in first-person shooters (FPSs), circle strafing is the technique of moving around a target in a circle while facing it. Circle strafing allows a player to fire continuously at an opponent while dodging counterattacks. By rapidly circling the opponent, the player evades the opponent's sights. Circle strafing is most useful in close-quarters combat, where the apparent motion of the attacking player is the greatest, and thus the chance of disorienting the opponent by making him lose track of the attacker is higher. The effectiveness of the circle strafing maneuver is mitigated when the opponent's weapon fires projectiles that travel instantaneously, or fires a large number in a machine gun-like fashion[1], although this effect can also be countered by employing firing techniques such as deflection, also known as 'target-leading'. 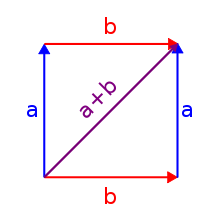 A diagrammatical explanation of straferunning.

Particularly in first-person shooters (FPSs), straferunning (known as speed-strafing among players of GoldenEye 007 and Perfect Dark, and as trichording among players of the Descent series) is a technique that allows a player to run or fly faster through levels by moving forwards and sideways (strafing) at the same time. The game combines these actions and the player achieves roughly 1.4 (square root of 2) times greater speed compared to moving in a single direction. The method used by the game can be demonstrated using vector addition. Pathways Into Darkness was one of the first games to allow straferunning.

The games in which straferunning can be employed treat forward motion independently of sideways (strafing) motion. If, for each update of the player's location, the game moves the player forward one unit and then moves the player to the side by one unit, the overall distance moved is

. Thus, in games with such behavior, moving sideways while simultaneously moving forward will give an overall higher speed than just moving forward, although the player will move in a direction diagonal to the direction being faced. This feature is even more enhanced if moving along three axes (e.g. forward + left + up), providing

(roughly 1.73) times greater speed, in games such as Descent.