Cholesterol-Dependent Cytolysins (CDC) are a family of β-barrel pore-forming exotoxins that are secreted by Gram-positive bacteria. CDC are secreted as water-soluble monomers of 50-70 kDa, that once bound to the target cell, will form a circular homo-oligomeric complex containing up to 50 monomers.[1] Through multiple conformational changes, the β-barrel transmembrane structure (~250Ǻ in diameter depending on the toxin) is formed and inserted into the target cell membrane. The presence of cholesterol in the target membrane is required for pore formation, though presence of cholesterol is not required by all CDC for binding. Intermedilysin (ILY) secreted by Streptococcus intermedius will bind only to target membranes containing a specific protein receptor, but cholesterol is required by intermedilysin (ILY) for pore formation. The distribution of cholesterol in the membrane can affect toxin binding, though the exact molecular mechanism that cholesterol regulates the cytolytic activity of the CDC is not totally understood.

Once the pore is formed within the target cell membrane, the regulation of the intracellular environment and what enters and leaves the cell is lost. The pore being ~250Ǻ in diameter is large enough to allow the loss of amino acids, nucleotides, small proteins as well as ions (Ca2+,Na+, K+, etc.). The loss of calcium in particular, which is involved in multiple molecular pathways will have a large impact on cell survival. The pore will also lead to an influx of water, which may lead to blebbing and cell death.

Bacteria invest energy into creating these toxins because they act as virulence factors.[1] By targeting immune cells such as macrophages the bacteria will be protected against phagocytosis and destruction by respiratory burst.[2]

The 28 CDC family members are known to vary in amino acid identity from 28.1 – 99.6%, with amino acid sequences ranging from 471 to 665 amino acids.[3] Within the primary structure of the proteins there is a low degree of conservation at the N-terminus, it is presumed because some CDC contain additional domains at this region and different species use different signal sequences for secretion.[4] The CDC monomer consist of 4 structural domains, with domain 4 (D4) being involved with membrane binding.[5] Multiple CDC monomers will oligomerize once bound to the target cell membrane forming a β-barrel structure which will be inserted into the target cell membrane. The core section of amino acids, which are required for pore formation are more conserved between CDC, which allows all CDC to exhibit similar three-dimensional structures and function. The structurally conserved domain 4 of CDC contains four conserve loops L1-L3 and an undecapeptide region, which is believed to be involved in cholesterol dependent recognition.[6] Single amino acid modifications in these loops prevented Perfingolysin O (PFO), which is a CDC secreted by Clostridium perfringens from binding to cholesterol rich liposomes.[3] 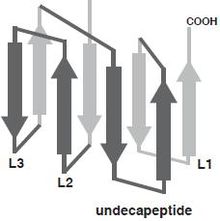 The mechanism of pore formation of perfingolysin O (PFO), which is secreted by Clostridium perfringens, begins with encountering and binding to cholesterol on the target membrane. The C-terminus of PFO domain 4 (D4) encounters the membrane first. The binding of D4 triggers a structural rearrangement in which the PFO monomers oligomerize forming the pre-pore complex.[1][7]

The binding of CDC to the target membrane is required for oligmerization.[1] The oligomerization of the CDC requires the exposure of hidden polypeptide regions that are triggered by conformational changes induced by protein-lipid interactions or protein-protein interactions.[1] The water-soluble form of the toxins is prevented from oligomerizing by having the access of one edge of a core β-sheet in the monomer blocked. To be specific, β5, a short polypeptide loop, hydrogen-bonds to β4, preventing β4 interaction with β1 on the adjacent monomer. The binding of D4 to the membrane surface triggers a conformational change in domain 3, which rotates β5 away from β4, exposing β4 allowing it to interact with the β1 strand of another PFO molecule, initiating oligomerization.

Unlike most of the exposed surface residues of CDC that are not conserved the residues at the surface of the D4 tip, which are involved in membrane interactions, are highly conserved.[3] Pore formation begins once two amphipathic transmembrane β-hairpins from ~35 PFO monomers are concertedly insert, which then create a large β-barrel that perforates the membrane.[7] The toxin gets around the energy barrier of inserting the CDC into the membrane by the formation of the β-barrel, which will lower the energy requirements compared to what would be required for the insertion of single β-hairpins. In the water-soluble monomeric form of CDC, the transmembrane β-hairpins that are located on both sides of the central β-sheet on domain 3 are each folded as three short α-helices to minimize the exposure of hydrophobic residues.[1] The α-helices are inserted into the target cell membrane bilayer and a conformational change takes place into amphipathic β-hairpins. A concerted mechanism of insertion is required so that the hydrophilic surfaces of the β-hairpins remain exposed to the aqueous medium, and not the hydrophobic membrane core. 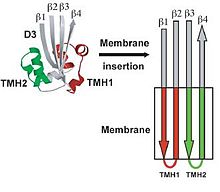 CDC are sensitive to both oxygen and cholesterol. Toxins isolated-form culture supernatants were inactivated once exposed to oxygen after being pre-incubated with cholesterol.[10] CDC are also pH-sensitive. A change of pH in a medium from 7.4 to 6.0 caused a conformational change in perfringolysin O, leading to the exposure of tryptophan residues to the aqueous solvent and altering the minimum cholesterol threshold required for binding.[11] Another CDC, listeriolysin O (LLO), which optimally functions at an acidic pH, will lose its function at a neutral pH. Listeriolysin O function can be restored if the cholesterol concentration within the target membrane is increased.[3]

Stages of insertion or Perfingolysin O monomers and oligomerization in target cell membrane.[12]

Effects of other membrane lipids

The phospholipid composition of a cell membrane affects the arrangement of cholesterol within the membrane and the ability for CDC to bind and initiate pore-formation. For example, perfringolysin O will preferentially bind to cholesterol-rich membranes composed mainly of phospholipids containing 18-carbon acyl chains.[13] Lipids having a conical molecular shape alter the energetic state of membrane cholesterol, augmenting the interaction of the sterol with the cholesterol-specific cytolysin.[15] Since high cholesterol concentrations are required for CDC binding/pore-formation, it was thought that CDC would associate with lipid rafts. A later study showed that sphingomyelin, a necessary component of lipid raft formation, inhibited rather than promoted the binding of perfringolysin O to the target membrane.[16]

Possible Coordination With Other Toxins

It is possible that the exposure of cholesterol at the membrane surface might be facilitated by other membrane-damaging toxins secreted such as phospholipase C, which cleave the head groups of phospholipids increasing the exposure of cholesterol. This has been seen in two organisms, perfingolysin O (CDC) and α-toxin secreted by clostridial myonecrosis.[17] and listeriolysin O (CDC) and phospholipases C released by Listeria monocytogenes leading to the virulence of these bacteria.[18]