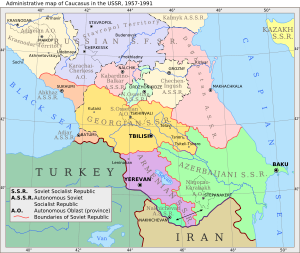 Chechen–Ingush ASSR on the map of Soviet Caucasus.

In 1810, the historical Ingushetia voluntarily joined Imperial Russia, and in 1859 the historical Chechnya was annexed to Russia as well, during the long Caucasian war of 1817-1864.

During World War II, in 1942–1943, the republic was partly occupied by Nazi Germany while 40,000 Chechens fought in the Red Army. On March 3, 1944, on the orders of Joseph Stalin, the republic was disbanded and its population forcibly deported upon the accusations of collaboration with the invaders and separatism. The territory of the ASSR was divided between Stavropol Krai (where Grozny Okrug was formed), the Dagestan ASSR, the North Ossetian ASSR, and the Georgian SSR.

The republic was restored on January 9, 1957 by Nikita Khrushchev.

In November 1990, the republic issued the declaration of its sovereignty and in May 1991 an independent Chechen-Ingush Republic was pronounced, which was subsequently divided into independent Chechen Republic and Republic of Ingushetia. Today, both are federal subjects of Russia.