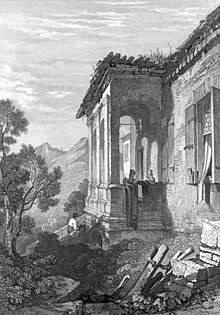 Petrarch's Arquà house near Padua in 1831 (artist's depiction with a tourist). 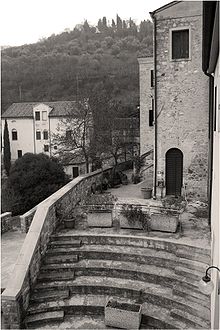 Petrarch's Arquà house near Padua where he retired (picture taken 2009).

Contact between Geoffrey Chaucer and Petrarch or Boccaccio has been proposed by scholars for centuries.[1] More recent scholarship tends to discount these earlier speculations because of lack of evidence. As Leonard Koff remarks, the story of their meeting is "a 'tydying' worthy of Chaucer himself."[2]

One of the reasons for this belief is because of Chaucer's many trips to mainland Europe from England. Chaucer happened to be in the same areas at the same time as Petrarch and Boccaccio. Another reason is because of the influence of Petrarch's and Boccaccio's works on Chaucer's later literary works.

Chaucer had made several trips to the mainland from England between 1367 and 1378 on the King's business as Esquire of the King.[3] During at least one of these trips it is possible that he met Petrarch or Boccaccio or possibly both in Italy.[4][5] Historian Donald Howard, Professor Walter William Skeat and Dr. Furnivall say there is good evidence to indicate that Chaucer met Petrarch at Arqua or Padua.[6][7]

There are government records that show Chaucer was absent from England visiting Genoa and Florence from December 1372 until the middle of 1373.[6][8] He went with Sir James de Provan and John de Mari, eminent merchants hired by the king, and some soldiers and servants.[8][9] During this Italian business trip for the king to arrange for a settlement of Genoese merchants these scholars say it is likely that sometime in 1373 Chaucer made contact with Petrarch or Boccaccio.[6][10]

Milan 1368: The wedding of the Duke of Clarence and Violante Visconti

Chaucer became a member of the royal court of King Edward III as a valet or esquire in June of 1367.[11] Among his many jobs in this position he traveled to mainland Europe many times.[11] On one of these trips in 1368 Chaucer may have attended the wedding which took place in Milan on 28 May or 5 June[12] between Edward's son Prince Lionel of Antwerp and Violante, daughter of Galeazzo II Visconti, Lord of Milan. [13] The above scholars write that he was likely introduced to Petrarch at this wedding.[13][14][15] Jean Froissart was also in attendance and perhaps Boccaccio.[16] They believe it plausible that Chaucer not only met Petrarch at this wedding but also Boccaccio.[8][13] This view today, however, is far from universally accepted. William T. Rossiter, in his 2010 book on Chaucer and Petrarch argues that the key evidence supporting a visit to the continent in this year is a warrant permitting Chaucer to pass at Dover, dated 17 July. No destination is given, but even if this does represent a trip to Milan, he would have missed not only the wedding, but also Petrarch, who had returned to Pavia on 3 July.[12]
Biographers suggest that Chaucer very well could have met Petrarch personally, not only at the wedding of Violante in 1367, but also in Padua sometime in 1372-1373.[17] 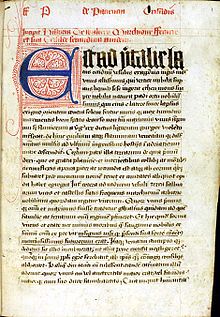 Petrarch's letter to Boccaccio, forming a preface to the tale of Griselda, was written shortly after Petrarch had made his version of Griselda.[18] In some copies Petrarch's version of the story of Greselda has a date of "June 8, 1373," which indicates the date of supposed composition.[18] Petrarch was so pleased with the story of Griselda ("De Patientia Griseldis") that he put it to memory.[18] He wanted to repeat the virtuous story to his friends, perhaps including Chaucer.[18][19] He eventually translated it into Latin, a common poetic language of the time (and a more prestigious language than the Italian vernacular).[18] Therefore, scholars conclude that Chaucer and Petrarch met at Padua in 1373, probably the early part of the year.[18][19] According to Skeat, evidence shows that Petrarch told Chaucer the story of Griselda from memory (though this may be speculation).[18][19] Since both knew Italian and French, they might have communicated in either language or a combination of both these languages.[6][18] It is evident that Chaucer obtained a copy of Petrarch's version written in Latin shortly after the meeting in Padua.[6][18] Petrarch died July 19, 1374.

Chaucer translates the story of Griselda into English where it became part of The Canterbury Tales as The Clerk's Tale.[6][18] Scholars speculate that he wrote the main part of the Clerk's Tale in the later part of 1373 or the early part of 1374, shortly after his first trip to Italy in 1372-73.[20] Chaucer gives much praise to Petrarch and his writings.[20] The "Originals and Analogues of some of Chaucer's Canterbury Tales", reprinted and published for the Chaucer Society in 1875, assert that Chaucer personally met Petrarch. Many quotations are properly marked in the margins of the pages of the versions in the Ellesmere and Hengwrt manuscripts with each in the correct places. Scholars conclude that it is quite clear that Petrarch personally gave Chaucer a version of Griselda at Padua in 1373 (though this idea was proposed in the late 19th century, and more recent scholars are more skeptical of propositions that cannot be proven).[21]

Influence of Petrarch's and Boccaccio's works

Chaucer produced works with much Italian influence after his Italian trip of 1372, whereas works written before his travel demonstrate French influence.[22][23] Chaucer's stories imitate, among others, his Italian contemporaries Dante, Petrarch and Boccaccio. For example, Boccaccio first put out his stories of Decameron; then Chaucer imitated many of these stories for his Canterbury Tales.[10][24][25] 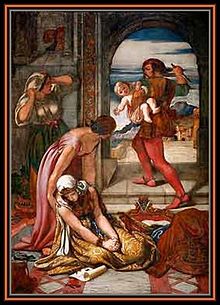 The Clerk's Tale - story of "Griselda"

Boccaccio wrote the story of Griselda, which was later translated by Petrarch. Biographers say Chaucer heard it from Petrarch first by word of mouth at Padua.[26] Later he received a Latin copy of it that he used to develop The Clerk's Tale.[26][27][28] Many passages of The Clerk's Tale are nearly word for word of Petrarch's Latin version of Griselda.[29]

In the prologue to The Clerk's Tale, the narrator suggests that he met Petrarch:

However, this does not mean necessarily that Chaucer himself met Petrarch in the real world. 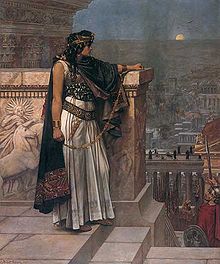 The Legend of Good Women

Chaucer followed the general plan of Boccaccio's work On Famous Women in The Legend of Good Women.[31][37][42] Both works are of famed women, draw on classical mythology and history, are in chronological order, give a synopsis as an introduction, and are dedicated to a queen.[42] Chaucer's "Cenobia" is borrowed from Boccaccio's Zenobia of De mulieribus claris.[41] Chaucer also borrowed information of certain women from Boccaccio's De Casibus Virorum Illustrium and Genealogia Deorum Gentilium.[38][39][43]

Chaucer's House of Fame was probably begun in 1374; considered one of his greatest works, it has much Italian influence.[23][44] This work shows the Italian influence on Chaucer after being in Florence in 1373 and returning to Milan in 1378.[45] Chaucer claims that "Lollius" was the source for the House of Fame, when in fact it came straight from Boccaccio's Il Filostrato. Also there are likenesses between this work of Chaucer's and Boccaccio's Amorosa visione.[38]

In Chaucer's Troilus and Criseyde, Troilus's lament after he has fallen in love song imitates Petrarch's sonnets, S'amor non e, che dunque e quel ch' i' sento? ("if this be not love?") adapted from the Filostrato.[40][46] Here Troilus's mode of thought is a Petrarchan combination of intelligent introspection, private emotion and scholastic logic.[47] As far as scholars know, this is the first known adaptation of a Petrarch sonnet in English.[47] Some believe that Troilus' later song (V.638-44) may imitate Petrarch's sonnet 189 ("My galley charged with forgetfulness").[47]

Nevertheless, Howard argues that only inconceivable coincidences could permit that Chaucer had not known Boccaccio.[49] The following coincidences would have to have taken place:[49]

The more plausible scenario for Howard indicates that Chaucer personally met Boccaccio.[49] Chaucer likely knew more Boccaccio works than scholars can prove.[49] It is certain that Chaucer had access to Boccaccio's Filostrato and Teseida because of the quality of imitations in The House of Fame and Anelida and Arcite.[38] The Knight's Tale uses Boccaccio's Teseida and the Filostrato is the major source of Troilus and Creseyde.