Bradwall Hall, Sandbach, demolished in the 1920s,[1] seat of the Latham Family

Latham of Bradwall is a family whose seat is at Bradwall Hall, in the township of Bradwall, near Sandbach, England,[2][3] with several notable members. The line is "a junior branch of the ancient Cheshire house of Lathom, of Lathom and Knowsley, which terminated in the heiress, Isabella Latham, who married Sir John Stanley, Knt., ancestor of the Earls of Derby".[4] The family is not thought to be related to John Latham (1740–1837) ) the ornithologist,[5] although this appears to be uncertain.[6] 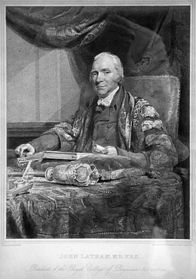 John Latham (1761–1843) was a physician who bought the Bradwall estate.[7] He became President of the Royal College of Physicians,[8] and also updated their Pharmacopoeia.[9]

Latham was the eldest son of the Rev. John Latham, B.A. of Oriel College, Oxford, and was born at Gawsworth in the county of Chester, Dec. 29, 1761, in the house of his great-uncle, the Rev. William Hall, then Rector of that parish. He received his early education at the Grammar School of Manchester, under Charles Lawson, A.M., Head Master, and entered Commoner of Brasenose College, Oxford, in 1778, where, having gone through the previous degrees in Arts, he was created M.B. May 3, 1786, and M.D. Oct. 10, 1788. In London, he completed his medical education under Dr. David Pitcairn at St. Bartholomew's Hospital.

On 12 April 1784, he married Mary, the eldest daughter and co-heiress of the Rev. Peter Mayer, B.A. Vicar of Prestbury, in the county of Chester.

He passed the first years of his professional life at Manchester and Oxford, where in both places he was elected physician to the respective infirmaries. In 1788 he returned to London, and the next year was admitted Fellow of the College of Physicians. In a few months he was elected physician to the Middlesex Hospital, afterwards to the Magdalen, and in the year 1792, succeeded Dr. David Pitcairn at St. Bartholomew's, about which time he settled in Bedford Row, and remained there until 1808, when he removed to Harley Street. In 1790, he was appointed Physician Extraordinary to the Prince of Wales, and afterwards re-appointed to the same office in the household of George IV.

In 1801, he bought the estate at Bradwall, in Sandbach. In 1814 he was elected President of the College of Physicians, and in 1816 he founded the Medical Benevolent Society.[10] He retired in 1829. He died Apr 20, 1843 at Bradwall Hall. Two portraits of Dr. Latham have been engraved. One is in Dance's collection. The other was engraved by Robert William Sievier, from a painting by John Jackson representing Dr. Latham as President of the College of Physicians. A duplicate of this painting, executed by the same artist, is one of the portraits in the Hall of Brasenose College, Oxford.[5]

Born at Oxford, March 18, 1787, Latham was the eldest son of the late John Latham, M.D., F.R.S., sometime President of the Royal College of Physicians, and, as a coheir of the Cheshire families of Mere and Arderne, derived maternally a recorded descent from most of the ancient houses of that palatinate. He was admitted to Brasenose College, Oxford, in 1803, and during his residence there he obtained the Chancellor's prize for his Latin poem on the subject of Trafalgar in 1806. The same honour was awarded in 1809 and 1812 to the several and successive prize poems of his two younger brothers, namely Dr. Latham, now of Grosvenor-street, and the Rev. Henry Latham, M.A. Vicar of Fittleworth, in Sussex, then resident members of the same college. The same three brothers, in 1844 joined in the presentation of a memorial window to the parish church of Sandbach, in remembrance of their departed parents.

In 1806 Mr. Latham was elected a Fellow of All Souls' College, Oxford, and afterwards proceeded B.C.L. 1810, D.C.L. 1815. He came into possession of his Cheshire estates on the demise of his father, April 20, 1843, and after this, to the close of his life, he continued resident at his paternal seat, discharging his duty as a county magistrate, and taking an active interest in the educational and charitable trusts of his neighbourhood.

Mr. Latham married, on the 24th May 1821, Elizabeth-Anne, eldest daughter of Sir Henry Dampier, one of the justices of the King's Bench. In 1839 he sustained the loss of his wife, and this was followed by the death of his eldest son, John Henry Latham, a youth of distinguished classical attainments and rare promise.

Three of his children survived him: George William, of Bradwall Hall, M.A. and barrister-at-law; Francis-Law; and Mary-Frances, wife of the Rev. Ambrose Jones, M.A. incumbent of Elworth, Cheshire. His remains were interred in the family burial place at his parish church of Sandbach, on 3 February 1853.[12]

He was born on 1 July 1789 in London. Described as "a very delicate child", he attended Sandbach School where he resided with his paternal grandmother (Sarah Latham née Podmore). Around 1796, he was transferred to the Grammar School of Macclesfield, and on to Brasenose College, Oxford in 1807. He took his M.D. degree at Oxford in 1818, and in the same year became a Fellow of the College of Physicians. In 1815 he was elected physician to the Middlesex Hospital, and to St Bartholomew's in 1824. On her accession in 1837, he was appointed physician extraordinary to Queen Victoria. He retired to Torquay in 1865, where he died on the 20th July 1875, age 86.

He was married twice. First to Diana Clarissa Chetwynd Stapleton, grand-daughter of Lord Chetwynd; she died in 1825, within a year of their marriage. Secondly on the 14 Feb 1833,[15] to Grace Mary Chambers, third daughter of Commander David Chambers, R.N. By her he had four children, two sons, Weyland Mere, Philip Arderne, and two daughters, Diana Frances and Mary Grace.[16]

Charles Latham MRCS LSA (1816 – 7 July 1907), was a physician, surgeon and registrar from Sandbach. He was a member of the Royal College of Surgeons (MRCS), and in 1839 joined the Worshipful Society of Apothecaries (LSA).[18] On 3 November 1867, Latham delivered triplets to the wife of a brass dealer, which was reported in The Lancet.[19] He died on 6 July 1907, a noted cricket fan.[20] A public memorial statue to him is located outside the Ashfield Primary Care Centre. He was affectionately known as "the old doctor".

Charles was the third son of Richard and Sarah Latham, and the nephew of John Latham (1761–1843). He went to Manchester Hospital, where he was apprenticed for 5 years to Scottish surgeon, Dr. John Robertson. After his apprenticeship, he became dresser at the Manchester Infirmary, and then moved to London where he obtained the certificates, of M.R.C.S., and L.S.A at St. Bartholomew's Hospital, and then returned to Sandbach, and became a partner with Mr. Sutton. On March 29, 1842, he was appointed medical officer of health for the Sandbach Relief District, a position he held for a period of 57 years, retiring on December 22, 1899. On 25 March 1845 he was appointed medical officer to the District (when the workhouse was opened), a position he held for nearly 60 years. For over 30 years he was public vaccinator, and surgeon to the Bradwall Reformatory from its foundation until 19 March 1903 when he retired. For some time he was also registrar of births and deaths, a duty which he handed over to his son in 1888.

George William Latham, the son of John Latham (1787–1853), was an English landowner, barrister and a Liberal politician.

On ceasing to practise he went to live at Bradwall Hall, and took an active part in the affairs of the county, particularly in relation to reformatory and industrial schools, one of which he established on his own property (Bradwall Reformatory School).[21] He took great interest in agriculture and farming, and was an active member of the Cheshire Chamber of Agriculture.

In politics he was an enthusiastic and advanced Liberal, and in the Parliamentary election of 1878 he contested Mid-Cheshire against Col. Egerton Leigh, by whom he was defeated by a large majority. In 1880 he again contested that constituency, and once more in 1883, but was defeated on both occasions, but by reduced majorities. In 1885 he was, however, elected Member of Parliament for the Crewe division, defeating his opponent, Mr. O. Leslie Stephen, a director of the London and North-Western Railway, by 808 votes. At the next election, in June, 1886, he could not again offer himself as a candidate, owing to serious ill-health, and on the 4th Oct 1886, he died at Bradwall Hall.[22]

Latham of Bradwall Arms: Erminois on a chief indented azure three bezants, over all a bend Gules. Crest: On a rock proper, an eagle with wings elevated Erminois preying on a child proper, swaddled Azure.[23]

Latham is part of the line of Lathams of Bradwall, a small hamlet close to Sandbach. In 1851, historian George Ormerod (who married Sarah Latham) wrote:

"The account of Latham of Bradwall would, therefore, be imperfect without a summary notice of the houses of the same name, severally of Lathom in Lancashire, and of Astbury in Cheshire. From the parent house the Bradwall family descends in female line through Mere, Arderne, Legh, Savage, and Stanley; and from the Astbury branch it has representative descent through Mere, Davenport, and Somerford".[24] 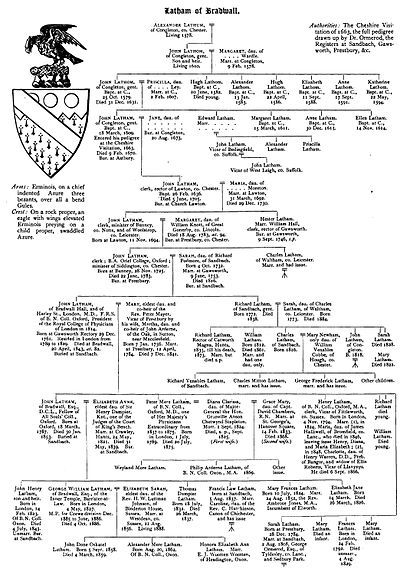