Phantasy Star IV: The End of the Millennium

Phantasy Star IV: The End of the Millennium

Phantasy Star IV: The End of the Millennium (ファンタシースター 千年紀の終りに, Fantashī Sutā Sennenki no Owari ni?) is a console roleplaying game released in 1993 for the Mega Drive in Japan and in 1995 for the Sega Genesis in North America. It is the fourth and final game in the original Phantasy Star series, concluding the story of the Algol Star System. The game was also made available on the Wii Virtual Console in Japan on June 24, 2008, in the PAL regions on November 14, 2008, and in North America on December 22, 2008, for the price of 800 Wii Points.[1] Phantasy Star IV is also part of the Sega Genesis Collection on the PlayStation 2 and PlayStation Portable and on Sonic's Ultimate Genesis Collection for Xbox 360 and PlayStation 3.

Phantasy Star IV kept many of the gameplay elements of the previous game, including turn-based battles, overhead exploration, and magic spells. This game is typically seen as the last of the original Phantasy Star games, closing the Algol system story as a sequel to Phantasy Star II (Phantasy Star III does not involve the Algo System). Phantasy Star IV is generally named as one of the greatest role-playing games of all time. [2]

Phantasy Star IV is an archetypal console RPG in the spirit of the series, featuring the staples of exploration, NPC interaction, and turn-based combat. Like the previous games in the Phantasy Star series, individual characters each have their own statistics and equipment that determine the character's performance in combat, improving their statistics by gaining experience levels (achieved through victory in combat). Additionally, non-Android characters have access to "Techniques," abilities similar to magic spells in other games, drawing upon a character's pool of "Technique Points" (TP) to be used, with new techniques being learned as a character gains levels.

Phantasy Star IV has a number of features new to the series, as well. The biggest addition are character specific "skills" unique to each character that each have a number of uses between rests determined by a character's level, expanding the number of commands available to any individual character as well as the number of times special commands may be used. This addition, more than any other, can be credited with the reduction in difficulty compared to Phantasy Star and Phantasy Star II, where characters only had Techniques. Another new feature are combination attacks; two (or more) specific commands (Grand Cross is made if Rune uses Efess and Chaz immediately follows with Crosscut) or types of commands (Triblaster will occur with any Foi, Tsu (or Thu), and Wat used simultaneously regardless of technique level), when falling in the correct order compared to one another in a combat turn combine into a new attack more powerful than its constituent parts. To abet this, programmable combat orders called "macros" can be prepared beforehand to ensure the correct order of action even if a character's statistics would normally have them act at a different point in the turn; thus, it becomes possible to have the lightning-fast Rika act after the much slower Wren if so desired. Finally, the last new feature would be the differing "types" of characters; androids function differently than their organic counterparts, not benefiting from most healing techniques and skills as well as having no access to techniques. Additionally, Androids do not learn new skills as they gain levels; all of their new skills are found in treasure chests, at which point the android equips the new skill and it can be used. Androids get significant advantages to offset these problems: their skills are both plentiful as well as unusually powerful (Posibolt, Phonomaser) or useful (Barrier, Recover), they have a large number of skill uses per rest, their revival items (Repair Kits, which also restore an android to full health) are far more common than the ones for organics (Moon-dew and Sol-dew are rare and extremely expensive), and androids restore hit points per step on a map screen.

The greatest and most memorable additions to Phantasy Star IV are in its far greater depth of storytelling compared to its predecessors. Character conversations and interactions are far more plentiful than in previous entries, the characters themselves have a great deal more individuality, and the plot features a greater number of twists and turns. Phantasy Star IV further fleshes out its narrative with manga-style panel illustrations to accompany major plot events, making the story more engaging and increasing the impact of events previously portrayed only with bland narration. 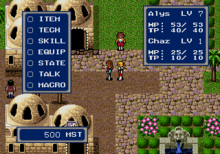 Chaz and Alys explore the town of Piata

The long, long struggle of ancient times finally ended...
The victor sacrificed the vanquished to the heavens.
Four bells tolled. Four torches were lit.
And the world continued for thousands of years...

Phantasy Star IV takes place 1,000 years after the events of Phantasy Star II. It is the story of Chaz Ashley, a young bounty hunter, who, along with his friends and allies, unwittingly becomes the savior of the Algol solar system. The story takes place on the planet Motavia, which has gone through dramatic climate changes since the time of the previous game. After an event called the Great Collapse, much of the once-thriving ecosystem has been reduced to desert, and life has become progressively more difficult for the planet's inhabitants. To make matters worse, there has been a marked increase in the numbers of the "biomonsters," a catch-all term for the strange and violent aberrations of Motavia's originally more docile flora and fauna.

Keeping these creatures under control is the job of "hunters", like Chaz and Alys, and it is during an investigation into an outbreak that the characters learn of the relation between the biomonster problem and the planet's ecological crisis. In truth, the planet is only reverting back to its natural desert state, which had been changed into an ecosystem more suited to human life by climate-changing technology thousands of years earlier. The reasons behind the malfunctions are clarified as the plot unfolds, relating directly to the events of Phantasy Star II.

Chaz and his allies connect the world's troubles to a cult leader called Zio "The Black Magician," whose aims appear to be total annihilation, not only of Motavia, but of the entire solar system, and perhaps the universe. The aim of the heroes thus becomes to defeat Zio in order to restore the computer systems maintaining Motavia. However, it soon becomes clear that Zio is merely the vanguard to a much larger, more dangerous enemy, long buried in the past. The secrets of the Algol star system are revealed as Chaz and company progress through the story, discovering both the nature of the threat to their worlds and the safeguards put in place in a time long forgotten.

Phantasy Star IV was originally designed for the Mega-CD system, and would have been vastly different from its final incarnation. This unreleased version was called Phantasy Star IV: The Return of Alis.[3] Features like 3-D dungeons (such as those featured in the first Phantasy Star), full motion video cutscenes, voice acting, and much more were planned. However, poor sales and lack of support for the Mega-CD platform caused a change of plans midway through development. Most of these features were scrapped from the final design, the intended voice cast declined, and the end result was a Sega Mega Drive cartridge game that bore little resemblance to the original plans for the CD-ROM version, which would have been at least 240 megabit.[citation needed]

The game was released in Japan on the Mega Drive in December 1993. It would be more than a year before the English-translated version of the game was released on the Sega Genesis in the United States. After delays beyond 1994, Americans were finally able to play Phantasy Star IV in February 1995. In the United Kingdom and Europe it was released on December 8, 1995. [4] However, Portuguese audiences would have to wait for a 2004 fan translation, as End of the Millennium became the first Phantasy Star title not to be officially translated to Portuguese by Tec Toy.

In an effort to appeal to the aesthetic sensibilities of Western gamers, the cover art for the American and European releases was re-done by Boris Vallejo. Both covers depict Chaz, Rika, and Rune, but the American/European box art deviates from their appearance in-game.

The instruction manual for the American version states that there are 15 possible combination attacks. However, only 14 were ever discovered.[6][7][7][8] Occasionally, the "secret technique" Feeve, a useless technique accessible through hacking, is mistaken for the "lost 15th combo."[9]

Phantasy Star: The End of the Millennium maintains an 85% rating on the aggregate site Game Rankings, where it is also the fourth highest ranking game for the Sega Genesis. It is also considered to be the definitive end of the original series, as future games bearing the Phantasy Star name such as Phantasy Star Online and Phantasy Star Universe have no direct relationship to the original games.

Nintendo Power has called it, along with Phantasy Star II, one of the greatest RPGs of all time.[2]

Phantasy Star IV makes a number of references to previous games. Some references are direct tie-ins to the overall plot, while others are so-called easter eggs placed into the game for the appreciation of series fans. There are also a number of references to other popular Sega franchises. In the final dungeon, players may experience a random encounter with an enemy called "Prophallus", which looks identical to Dark Falz (Dark Force) from the original Phantasy Star; this is an even closer reference than it appears, as "Prophallus" is considered by some to be an incorrect transliteration of "Dark Falz". There is also a wreckage in the fields near the town of Nalya. It is a purely optional dungeon full of robotic enemies, some of which are strongly reminiscent of enemies from previous games: For instance, Whistles are similar to those found in Phantasy Star II [Whistlers], and the Forren enemies are a reference to the androids from Phantasy Star III. The wreckage itself is a crash of a spaceship habitat similar to the Alisa-III, the world-setting of Phantasy Star III. The town of Termi, near Ladea Tower, is an homage to the original Phantasy Star, featuring statues of Alis and Myau and the shop called "Bayamare," a reference to the tower of Baya Malay, which sells numerous Easter Egg items that previously appeared in Phantasy Star.

Some music tracks from previous Phantasy Star games have reappeared as remixes (PS1 Dungeon Arrange 1 and 2). Also, "Pao-Pao", the track that has played in an area of Aiedo's Hunter Guild, is a remix of a track used in Sega's "Fantasy Zone" series. "Pao-Pao" is likely to be a reference to Opa-Opa, the main character. One of the young Musk Cats in Myau's cave brags about being able to get the top off a bottle. In the original Phantasy Star, Myau needed help getting the top off a bottle, which contained a potion necessary to save his friend, Odin. Sonic The Hedgehog is referenced in the game in a book titled Run, Hedgehog, Run! in Saya's Grammar School along with Ecco the Dolphin in the book titled A Day With Ecco. A reference to Golden Axe also appears. There is also a Game Gear located in the cupboards of the inn in Nalya.