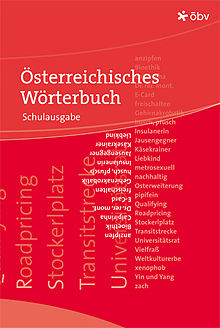 The official Austrian Dictionary in the 40th school edition from 2006 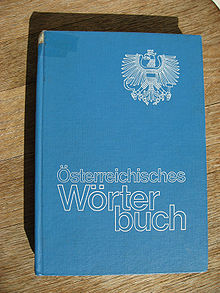 The school version of the 36th edition from 1985 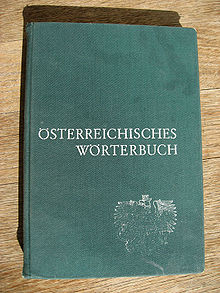 The school version of the 32nd edition from 1972

Das Österreichische Wörterbuch / Österreichisches Wörterbuch ([The] Austrian Dictionary, or ÖWB) is the official German dictionary in Austria. It is edited by a group of linguists under the authority of the Austrian ministry of education, art and culture (Bundesministerium für Unterricht, Kunst und Kultur). This Austrian counterpart to the German Duden contains a lot of terms that are unique to the Austrian German or that are more frequently used or differently pronounced there. However a considerable amount of this "Austrian" vocabulary is also common in southern parts of Germany, especially Bavaria. The most recent edition is the 41st from 2009. Since the 39th edition from 2001 the orthography of the ÖWB was adjusted to the German spelling reform of 1996. This dictionary is also in official use in the Italian province of South Tyrol.

The first edition of the Austrian Dictionary was edited in 1951 on an initiative from the then Austrian minister of education Felix Hurdes. It replaced the old "Regeln für die deutsche Rechtschreibung nebst Wörterbuch", a standard work for the German orthography that dated back to pre-World War I times (1879 and 1902). The first edition had 276 pages and around 20.000 entries and was designed for use in the Austrian educational system.

At that time, only six years after World War II, Austria was still under allied administration and the Austrian civilian government tried to cut political ties to Germany, including cultural and linguistic reminiscences to the former Nazi regime.[1] The creation of the Austrian dictionary has to be assessed under these circumstances. The annexation of Austria into Greater Germany in 1938 had also brought a unified official standard form of the German language, that was now revised by referring to pre-war Austrian standards and by including local vocabulary originating from Austro-Bavarian dialects, especially but not exclusively typical Viennese terms.

The Austrian dictionary hence defined the Austrian form of Standard German, making it official and obligatory for use in schools and in public administration. For private persons, the business correspondence of companies, publishing houses and newspapers it remained an orthographic recommendation.

Since then it was republished and expanded in numerous editions, that were each published in three different versions: a reduced version for primary schools (Volksschule), a medium sized version for high schools (Hauptschule, Gymnasium) and a full version for the general public. The 35th edition from 1979 was considerably expanded in the listed vocabulary and with the 39th edition from 2001 the reformed German orthography was adopted. This new standardized orthography, that was determined by an international group of experts from Germany, Switzerland and Austria, lead to considerable debates and refusal in Austria. Most newspapers switched to the reformed othography but some later revoked their decisions and now use either the old version or a separate in-house orthography (Hausrechtschreibung).

The Austrian dictionary remained with the reformed orthography, only at terms that are differently pronounced in Austria, the orthography differs from the German standard. Nevertheless the ÖWB still includes a considerable amount of unique vocabulary, that was even expanded in the newest 40th edition.

The newest 40th edition from 2006 contains in the full version around 80,000 terms on 1,008 pages. The school version is slightly reduced 864 pages, whereas the small version is limited to 20,000 terms. The authors of this edition were the linguists Otto Back, Erich Benedikt, Karl Blüml, Jakob Ebner and Hermann Möcker from the institute of Austrian studies (Institut für Österreichkunde), as well as the dialectogists Maria Hornung, Professor Heinz Dieter Pohl from the University of Klagenfurt and Emeritus professor Herbert Tatzreiter from the University of Vienna.

There are about 3,000 new terms that were added to the 39th edition, among them a lot of Austrian neologisms like „E-Card“ for the Austrian social security card, „Hacklerregelung“, a legal term for a special retirement law, and „Pensionsharmonisierung“. From the colloquial vocabulary new terms were added like „Altenbetreuer“ (geriatric nurse), „anzipfen“ (to get fed up), „ablösefrei“ (without transfer fee), „Audiobook“, „Afro-Look“ und „Alkopops“ (soft drink with liquor). New technological terms were also added, like: „skypen“, „VoIP“, „Blog“, „Linux“ and even „Wikipedia“.

Interesting to see is, that even new terms might differ from their counterparts in Germany. The Austrian dictionary now sets the term „smsen“ (to text message, pronounced as-am-as-an) as standard, whereas the Duden uses „simsen“, both derived from the English abbreviation „SMS“ for "short message service".

On the other hand, numerous outdated word were taken from the 40th edition, either because their reference in the real world ceased to exist or because they became out of fashion. Examples are „Absperrkommando“, „affengeil“ und „Arbeitermittelschule“. However the terms „Schilling“ and „Gendarmerie“ are still listed, although their signifiants don't exist any more. Still included are some typical dialect terms, that continue to be used also in the written language, like the Carinthian „Strankerl“ (common beans) or the word „Zöger“ bzw. „Zeger“ for a wicker basket.

A curiosity had been the protest of several parents against the 39th edition. They argued that in their opinion were too many "dirty words" listed in the dictionary, of which some have been therefore removed from the school version of the 40th edition, for example the word „pempern“, which is a colloquial term for practicing sexual intercourse.

The objective of the Austrian dictionary has never been to do classical language planning, but to do a re-codification of the form of the German language used in Austria. New terms were only included to the dictionary, when they had already been in considerable use in newspapers and contemporary literature.

Although the dictionary was originally designed to promote Austrianism and language patriotism, throughout the years the dictionary commission followed a moderate policy of contrastive linguistics and tried to avoid language secessionism. Nevertheless in the case of conflicting definitions the Austrian dictionary overrules the Duden and remains the sole source for defining the Austrian standard. In post-World War II Austria the German Duden never had any legal authority, although informally it is also widely in use as a work of reference.[2]