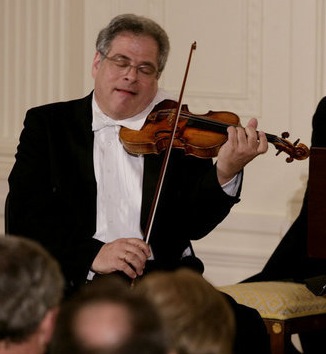 Itzhak Perlman (born , ) is an i-American , conductor, and .

Perlman was born in , , now , where he first became interested in the violin when he heard a classical music performance on the radio. He studied at the Academy of Music in Tel Aviv before moving to the to study at the with and . He made his debut at in 1963 and won the prestigious Leventritt Competition in 1964. Soon afterward he began to tour extensively. In addition to an extensive recording career, he has made occasional guest appearances on American television, starting in the 1970s on shows such as "" and "", as well as playing at a number of functions at the .

Perlman contracted at the age of four. He made a good recovery, learning to walk with the use of crutches. Today, he generally uses crutches for mobility and plays the violin while seated.

Although he has never been billed or marketed as a singer, he sang the role of "Un carceriere" ("a jailer") on a 1981 recording of Puccini's which featured , , and , with conducting. He had earlier sung the role in an excerpt from the opera on a 1980 Pension Fund Benefit Concert telecast as part of the series, with as Cavaradossi, and conducting the . Perlman is a basso.

While primarily a solo artist, Perlman has performed with a number of other notable musicians, including with , and at the 150th anniversary celebration of Tchaikovsky in Leningrad in December 1990. He has also performed (and recorded) with good friend and fellow Israeli violinist on numerous occasions over the years.

As well as playing and recording the for which he is best known, Perlman has also played , including an album made with jazz pianist , and . Perlman has been a soloist for a number of movie scores, notably the score of the "" by John Williams, which subsequently won an Academy Award for best score. More recently, he was the violin soloist for the "Memoirs of a Geisha", along with . Perlman played selections from the musical scores of the movies nominated for "Best Original Score" at the with Yo-Yo Ma, and at the .

Perlman plays on the antique "" violin of 1714, considered to be one of the finest violins made during Stradivari's "golden period", as well as the "Sauret" Guarneri del Gesu of c.1743.

In recent years, Perlman has also begun to conduct, taking the post of principal guest conductor at the . He served as music advisor of the from 2002-2004. In November, 2007, the announced the appointment of Perlman as Artistic Director and Principal Conductor, with his debut performance leading the orchestra to take place in October, 2008.

Perlman also teaches, and in 1975 took a faculty post at the Conservatory of Music at . In 2003, Mr. Perlman was named the holder of the Dorothy Richard Starling Foundation Chair in Violin Studies at the Juilliard School, succeeding his teacher, Dorothy DeLay.

Itzhak Perlman resides in with his wife, Toby, also a classically trained violinist. They have five children, Noah, Navah, Leora, Rami (of the rock band, ) and Ariella. In 1995, the Perlmans founded the in Shelter Island, New York, offering gifted young string players a summer residential course in .

1986: Honored with the "Medal of Liberty" by President Reagan. [cite web|title=Perlman awards|url=http://www.sonyclassical.com/artists/perlman/bio.html|accessdate=2008-03-25]