Kate Douglas Wiggin (September 28, 1856–August 24, 1923) was an American educator and author of children's stories, most notably the classic children's novel Rebecca of Sunnybrook Farm. She started the first free kindergarten in San Francisco in 1878 (the Silver Street Free Kindergarten). With her sister during the 1880s, she also established a training school for kindergarten teachers. Kate Wiggin devoted her adult life to the welfare of children in an era when children were commonly thought of as cheap labour.

Kate Douglas Smith Wiggin was born in Philadelphia, the daughter of lawyer Robert N. Smith, and of Welsh descent.[1][2] Kate herself experienced a happy childhood, even though it was saddened by the American Civil War and her father's death. Kate and her sister Nora were still quite young when their widowed mother moved her little family from Philadelphia to Portland, Maine, then, three years later, upon her remarriage, to the little village of Hollis. There Kate matured in rural surroundings, with her sister and her new baby brother, Philip. 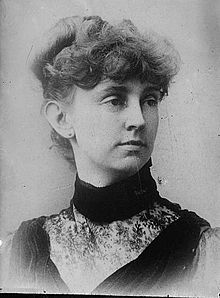 Her education was spotty, consisting of a short stint at a "dame school", some home schooling under the "capable, slightly impatient, somewhat sporadic" instruction of Albion Bradbury (her stepfather), a brief spell at the district school, a year as a boarder at the Gorham Female Seminary, a winter term at Morison Academy in Baltimore, Maryland, and a few months' stay at Abbot Academy in Andover, Massachusetts, where she graduated with the class of 1873. Although rather casual, this was more education than most women received at the time.

During 1873, hoping to ease Albion Bradbury's lung disease, Kate's family relocated to Santa Barbara, California, where Kate's stepfather died three years later. A kindergarten training class was opening in Los Angeles under Emma Marwedel (1818-1893),[2][3] and Kate enrolled. After graduation, in 1878, she headed the first free kindergarten in California, on Silver Street in the slums of San Francisco. The children were "street Arabs of the wildest type", but Kate had a loving personality and dramatic flair. By 1880 she was forming a teacher-training school in conjunction with the Silver Street kindergarten. 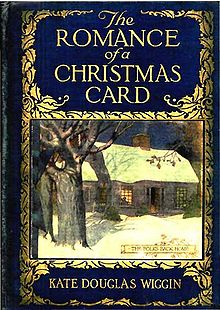 Cover of The Romance of a Christmas Card (1916)

In 1881, Kate married (Samuel) Bradley Wiggin, a San Francisco lawyer.[2] According to the customs of the time, she was required to resign her teaching job.[4] Still devoted to her school, she began to raise money for it through writing, first The Story of Patsy (1883), then The Birds' Christmas Carol (1887). Both privately printed books were issued commercially by Houghton Mifflin in 1889, with enormous success.

Ironically, considering her intense love of children, Kate Wiggin had none. She moved to New York City in 1888.[2] When her husband died suddenly during 1889, Kate relocated to Maine. For the rest of her life she grieved, but she also traveled as frequently as she could, dividing her time between writing, visits to Europe, and giving public reading for the benefit of various children's charities.

During 1895 Kate Wiggin married a New York City businessman, George Christopher Riggs, who became her staunch supporter as her success increased. Her literary output included popular books for adults; with her sister, Nora A. Smith, she published scholarly work on the educational principles of Friedrich Froebel: Froebel's Gifts (1895), Froebel's Occupations (1896), and Kindergarten Principles and Practice (1896);[2] and she wrote the classic children's novel Rebecca of Sunnybrook Farm (1903), as well as the 1905 best-seller Rose o' the River. Rebecca of Sunnybrook Farm became an immediate bestseller; both it and Mother Carey's Chickens (1911) were adapted to drama. Houghton Mifflin collected her writings in ten volumes in 1917.

For a time, she lived at Quillcote, her summer home in Hollis, Maine. Quillcote is around the corner from the town's library, the Salmon Falls Library, which Wiggin founded in 1911.[5] Wiggin founded the Dorcas Society of Hollis & Buxton, Maine in 1897. The Tory Hill Meeting House in the adjacent town of Buxton inspired her book (and later play), The Old Peabody Pew (1907).

During 1921, Wiggin and her sister Nora Archibald Smith edited an edition of Jane Porter's 1809 novel of William Wallace, The Scottish Chiefs, for the Scribner's Illustrated Classics series, which was illustrated by N. C. Wyeth.[6] During the spring of 1923 Kate Wiggin traveled to England as a New York delegate to the Dickens Fellowship. There she became ill and died, at age 66, of bronchial pneumonia. At her request, her ashes were brought home to Maine and scattered over the Saco River. Her autobiography, My Garden of Memory, was published after her death.

Wiggin was also a songwriter and composer of music. For "Kindergarten Chimes" (1885) she created some of the lyrics, music, and arrangements. For "Nine Love Songs and a Carol" (1896) she created all of the music.