:"Jane Porter is also the name of the romantic interest of in the novels of ." 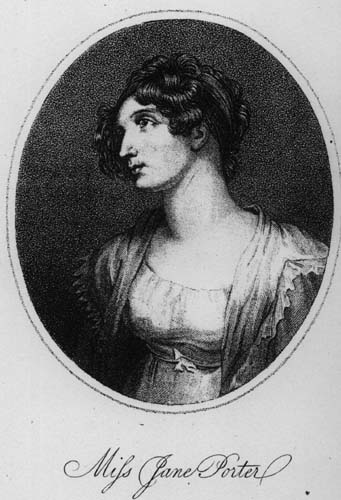 Jane Porter was a Scottish novelist.

Jane Porter was an avid reader. Said to rise at four in the morning in order to read and write, she read the whole of 's "" while still a child. Tall and beautiful as she grew up, her grave and preoccupied air earned her the nickname 'La Penseroso', possibly a reference recalling the poem 'Il Penseroso' by John Milton ,meaning 'A brooding or melancholy person or personality'.

After her father's death, her family moved to Edinburgh, where was a regular visitor. Some time afterward the family moved to London, where the sisters became acquainted with a number of literary women: , , , , and .

Her novel "" (1803) is one of the earliest examples of the historical novel, and it went through a dozen editions. Based on eye-witness accounts from Polish refugees of the doomed independence struggle of the 1790s, the book was praised by the great Polish patriot . "" (1810) a novel about William Wallace, was also a success, (the French version was banned by Napoleon) and it has remained popular with Scottish children. She wrote a number of novels, as well as two plays, which were less successful. Jane also contributed to various periodicals.

A romance, "" (1831), purporting to be a record of actual circumstances, and edited by Jane, was written by her brother, Dr. ., as letters in the University of Durham Porter archives show.

Jane and , who both lived in London and Surrey later on, were sisters of , the historical painter.