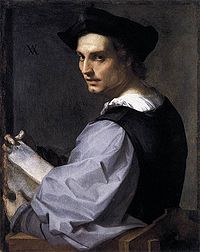 Cover of some reproductions of Men and Women

Men and Women is a collection of fifty-one poems in two volumes by Robert Browning, first published in 1855. While now generally considered to contain some of the best of Browning's poetry, at the time it was not received well and sold poorly.[1]

Men and Women was Browning's first published work after a five year hiatus, and his first collection of shorter poems since his marriage to Elizabeth Barrett in 1846. His reputation had still not recovered from the disastrous failure of Sordello fifteen years previously, and Browning was at the time comprehensively overshadowed by his wife in terms of both critical reception and commercial success. Away from the spotlight, Browning was able to work on a long-considered project. He had long been associated with the dramatic monologue, having written two early volumes of poems entitled Dramatic Lyrics and Dramatic Romances and Lyrics, but with Men and Women he took the concept a step further.

Browning's Men and Women consists of fifty-one poems, all of which are monologues spoken by different narrators, some identified and some not; the first fifty take in a very diverse range of historical, religious or European situations, with the fifty-first - One Word More - featuring Browning himself as narrator and dedicated to his wife. The title of the collection came from a line in her Sonnets from the Portuguese. Browning himself was very fond of the collection, referring to the poems as "My fifty men and women" (from the opening line in One Word More), and today, Men and Women has been described as one of Victorian England's most significant books.[citation needed]

Transcendentalism - A Poem in Twelve Volumes

Thirteen years after the publication of Men and Women, Browning revisited the first edition, and made a reclassification of it. He separated the simpler rhymed presentations of an emotional moment, such as Mesmerism and A Woman's Last Word, or the picturesque rhymed verse telling a story of an experience, such as Childe Roland and The Statue and the Bust, from their more complex companions, such as Cleon, Fra Lippo, and Rudel. The resulting collection of only twelve poems is typically found today in many abridged editions of Men and Women, and in the somewhat more accurately titled volume, Transcendentalism: A Poem In Twelve Volumes.[2]

Poems in the collection