:"This article is about a U.S. band. For other uses, see ."Infobox musical artist |
Name = The Grass Roots 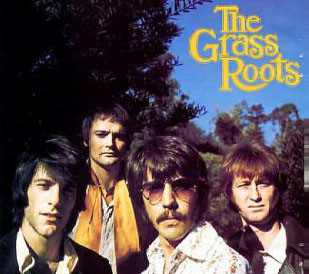 The Grass Roots are a U.S. band that charted between 1966 and 1975 as the brainchild of songwriting duo and .

In their career, The Grass Roots achieved one , two s, thirteen s and charted singles a total of twenty nine times.1Between 1967 and 1972, The Grass Roots set a record for being on the Billboard charts for 307 straight weeks.1They are one of only nine bands that have charted twenty nine or more Top 100 Billboard singles. 1They have sold over thirty million records worldwide.1

Since the disbanding of the original group in 1975, early member and a newer group of Grass Roots continue to perform and tour with many shows each year. They hold the all time attendance record for one act, the US concert of 600,000 people on July 4, 1982 in Washington, DC.1 They recently released a live album chronicling their fourteen Top 40 Billboard hits titled "Live Gold" in 2008.

The name "Grass Roots" originated in 1965 as the name of a band project by the songwriter and producer duo of and . Sloan and Barri had written several in an attempt by their , to cash in on the budding movement. One of these songs was "Where Were You When I Needed You," which was recorded by Sloan and Barri and a now forgotten line-up of s. Sloan provided the lead vocals and played . The song was released under "The Grass Roots" name and sent, as a demo, to several s of the .

When moderate interest in this new "band" arose, Sloan and Barri went to look for a group that could incorporate The Grass Roots name. They found one in a group named "The Bedouins" and cut a new version with that band's lead vocalist, Willie Fulton. In 1965, the Grass Roots got their first official airplay on radio stations, such as KGB(AM) in and KHJ in with a version of the song, "Mr. Jones (Ballad Of A Thin Man)." For some months, The Bedouins were the first "real" Grass Roots — but the partnership with Sloan and Barri broke up when the band demanded more space for their own more -oriented material (which their producers were not willing to give them). Willie Fulton, Denny Ellis and David Stensen went back to San Francisco, with drummer the only one who remained (he was to become a member of a later Grass Roots line-up, as well). In the meantime, the second version of "Where Were You When I Needed You" peaked in the in mid-1966; an album of the same name sold poorly, probably because there were no Grass Roots anymore to promote it at the time of its release.

The years of success

The group's third — and by far most successful — incarnation was finally found in a Los Angeles band, called The 13th Floor (not to be confused with the ). This band consisted of , , Warren Entner and Kenny Fukomoto and had formed only a year earlier before submitting a to . [ [http://the-grassroots.com/html/biography.html Biography ] ] was recruited into the band when Fukomoto was suddenly drafted into the army. The band was offered the choice to go with their own name or choose to adopt a name that had already been heard of nationwide.

They had their first top 10 hit with "Let's Live For Today" in the summer of 1967 as The Grass Roots. With as lead singer, they recorded a third version of "Where Were You When I Needed You." The band continued in a similar hit-making vein for the next five years ('67-'72). In the beginning, they were one of many U.S. guitar pop/rock bands, but with the help of Barri and their other producers, they developed a unique sound for which they drew as heavily on British beat as on , and . Many of their recordings featured a , which was a novelty in those days among American rock bands, with groups like Chicago just developing.

The Grass Roots songs hitting the radio in these times include "Things I Should Have Said" (1967), "Midnight Confessions" (1968), "Bella Linda", "Lovin' Things", "The River Is Wide", "Wait A Million Years", "Heaven Knows" (1969), "Walking Through The Country", "Baby Hold On", "Temptation Eyes" (1970), "Sooner Or Later" (1971) and "Two Divided By Love" (1972). The bulk of the band's material continued to be written by Dunhill Records staff (not only Sloan and Barri). The Grass Roots also recorded songs written by the group's s, which appeared on their albums and the s of many hit singles.

In 1969, Creed Bratton left and was replaced by Dennis Provisor on keyboards and vocals, plus rotating lead guitarists Terry Furlong and Brian Naughton to form a quintet — the first of many line-up changes that the band was to be subject to. In 1971, Rick Coonce, Terry Furlong, Brian Naughton and Dennis Provisor left and were replaced by Reed Kailing, Virgil Weber and original member Joel Larson. The singer/songwriter/guitarist duo of Warren Entner (later a successful heavy metal manager) and remained the point of focus in all these years.

From 1970 on, success slipped away slowly but surely. The Grass Roots had their last top 10 hit with "Sooner Or Later" in June, 1971, and success with "Two Divided By Love" not long after. Their final two hits in 1972 were "The Runway" and "Glory Bound." Follow-up singles sold disappointingly or failed to chart altogether - it was clear that their time was over. The 1976 single "Out In The Open" became their , with the band having disbanded the previous autumn.

remained in the and launched a solo career in 1979 (assisted on his solo album by several members of ). When interest in bands of the 1960s began to rise again in the 1980s, Grill reformed The Grass Roots (now as "The Grass Roots Starring Rob Grill") and tours the United States. He continues to lead the band into the new millennium and is the voice of The Grass Roots, playing many live performances up to the present day.

In 2006, former manager Marty Angelo published a book entitled, "Once Life Matters: A New Beginning" which has numerous stories about his life on the road with and The Grass Roots back in the early 1970s.

* The name Grass Roots was used sporadically by Arthur Lee of Love, in the Los Angeles area. Dunhill Records secured the legal use of the name by releasing a record, which Lee never did.
* The band was seen in the film "". They play the song "Feelings" at a crowded dance party.
* The Grass Roots have appeared on over 50 national television shows including, "", "The Today Show", Ed Sullivan, , Sonny & Cher, "", Hit-Makers, , and a record sixteen times on ’s "".
* The 1975 "Self Titled" LP is seen in the film "FM". The back cover appears in a long DJ broadcast room scene with characters played by and .
* The band is mentioned by 's character in the film "". He comments about the music while navigating a teenage party looking for his missing niece.
*Guitarist plays a character also named Creed Bratton, a version of himself, in the US version of the "The Office". In a scene that never aired from the episode "Booze Cruise," Bratton's boss, Michael, borrowed the guitar from a 's band and plays it poorly. Bratton then takes the guitar from Michael and proceeds to surprise the rest of the passengers with his excellent playing. The scene then cuts to a confessional, where Bratton talks of his time with The Grass Roots, complete with pictures of the actual band and references to actual tours. In another deleted scene from the episode "Product Recall," a fictional "" writer notices Bratton was a member of The Grass Roots. He also sang one of his own songs titled "Spinnin' N Reelin'" in the episode "."
* The band is mentioned frequently on the nationally syndicated Don and Mike radio show. has sat in with the band several times at performances in the Washington DC area.
* The Grass Roots version of the song, "", was featured in the 1987 film "".
* The Grass Roots song "Midnight Confessions" was featured in the 1997 film "Jackie Brown".