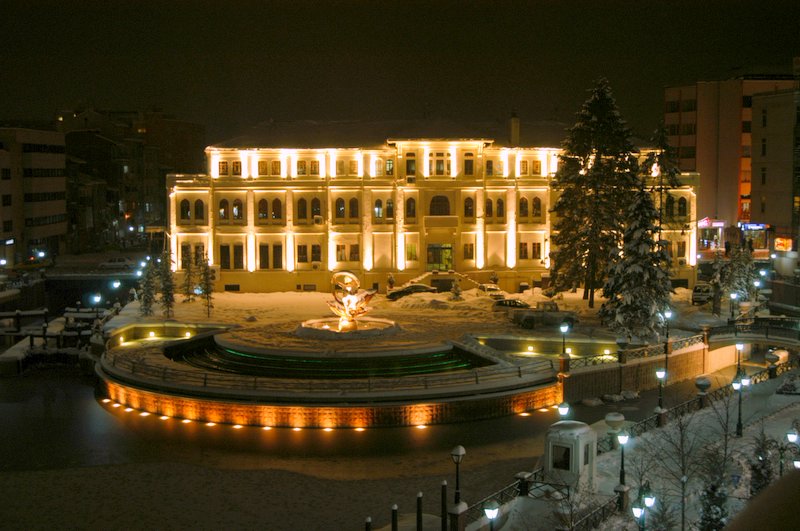 Eskişehir ("eskē'shehēr", _tr. Eskişehir, "Old City"; Latin: "Dorylaeum"; Greek: Δορύλαιον, ) is a city in northwest and the capital district of . According to 2007 census, population of the district is 595,157 of which 570,825 live in the city of Eskişehir. [ [http://www.eskisehir.gov.tr/nufus.asp TC Eskişehir Valiliği – Nüfus Durumu] tr icon] The city is located on the bank of , 792 m above sea level, where it overlooks the fertile n Valley. In the nearby hills one can find hot springs. The city is on theconvert|250|km|mi|0|abbr=on west of , convert|350|km|mi|0|abbr=on southeast of and convert|90|km|mi|0|abbr=on northeast of . The province covers an area of convert|2678|km2|sqmi|0|abbr=on. [cite web|url=http://www.statoids.com/ytr.html|title=Statistical information on districts of Turkey|accessdate=2008-04-12|author=Statoids|language=English]

The name Eskişehir literally means "Old City" in Turkish, although the locational suffix "şehir" is derived from the Persian word "shahr" (: شهر), meaning "city". Indeed the city was founded by the in about 1000 BC. Many Phrygian artifacts and sculptures can still be found in its Archeological Museum. There is also a museum of stone, whose production remains still notable, used to make high quality meerschaum pipes. In the fourth century AD the city moved about ten km northeast, from Karadja Hissar to Shehir Euyuk.

Whenever it was mentioned by ancient geographers, the city was described as one of the most beautiful in .

As with many towns in , arrived after made it the official of the . Beginning in the 4th century, records exist of bishops holding office in Eskişehir. The city was known as Dorylaeum, then. One of these bishops, Eusebius, was heavily involved in shaping the evolving of the church.

Modern-day Eskişehir is one of Turkey's foremost industrial cities. Traditionally dependent on flour-milling and brickyards, the city expanded with the building of railway workshops in 1894 for work on the . Eskişehir was also the site of Turkey's first aviation industry (Aeronautical Supply Maintenance Centre) and its is the headquarters of Turkey's First Tactical Air Force, on 's southern flank during the .

Most of Eskişehir was rebuilt after the . It is a well-functioning attractive place, but with few old attractions. One exception is the Kursunlu Camii Mosque.huh Near Eskişehir lies the site of the ancient city of . Eskişehir is noted for its hot sulphur springs.

There are two universities in Eskişehir. These are and . The current Metropolitan Mayor of Eskişehir Prof. Dr. was formerly the rector of .

The city has a significant population of . It also attracted ethnic Turks emigrating from and who contributed to the development of the city's metalworking industries.